Home » Sport » What to Watch in the Balance Beam Final

What to Watch in the Balance Beam Final

Simone Biles will be back on the floor for the first time in a week, but she will have stiff competition for a medal. 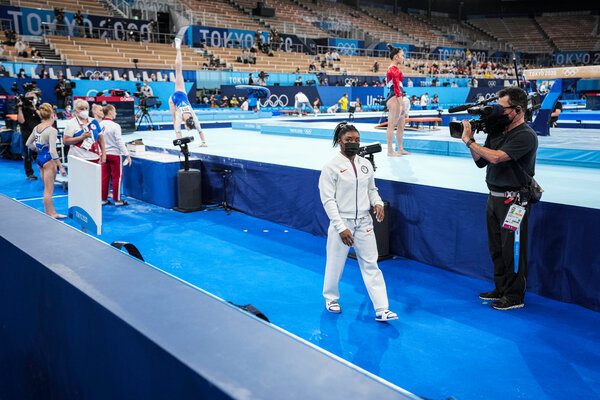 The women’s gymnastics events in Tokyo will wrap up on Tuesday with the balance beam final, and Simone Biles will be competing for the first time since withdrawing from the team final a week ago.

It is the last shot at an individual medal for Biles, who qualified for every final but pulled out of the all-around, vault, uneven bars and floor exercise because of a mental block that prevented her from competing safely.

She will be up against her teammate Sunisa Lee, who won gold in the all-around and bronze on bars; Guan Chenchen and Tang Xijing of China, who were first and second on beam in the qualifying round; and Larisa Iordache of Romania, who is looking for redemption after years of injuries.

How to watch in the United States

LIVE: The competition begins Tuesday at 4:50 a.m. Eastern time and can be livestreamed via the NBC Olympics site, Peacock or the NBC Sports app.

TAPE DELAY: Many fans will prefer to stream a replay or watch the tape-delayed broadcast on NBC at 8 p.m. Eastern time.

How the competition works

The eight gymnasts who scored highest on beam in the qualifying round, with a maximum of two per country, will compete in the final. (The fifth-ranked gymnast, Lu Yufei of China, was shut out by the two-per-country rule, and the ninth-ranked gymnast, Flávia Saraiva of Brazil, advanced instead.)

Each routine will receive one score for difficulty and another for execution, and the two will be added together to produce final scores. Here’s a guide to beam skills and scoring.

Simone Biles, 24, will be competing in her only apparatus final at these Games, and it’s not clear if she will do the same routine she did in the qualifying round, which had a huge difficulty score, 6.5. That would make her a strong medal contender if she avoided the large stumble she had on her full-twisting double back dismount. (She was the sixth qualifier to the final because of that mistake, but, without it, she would probably have been second.) Because her mental block relates to twisting, though, she may switch to a double pike dismount, which would lower her difficulty by 0.4.

Sunisa Lee, 18, said before the Olympics that she wanted to win a medal on beam, and she might: She had the third-highest score, 14.2, in the qualifying round. But with so many strong gymnasts in the final, she has no room for error. She didn’t quite match her qualifying mark in the team final, scoring 14.133, and she scored 13.833 in the all-around final after nearly losing her balance on her first skill.

Here are the other six competitors, in the order in which they qualified:

Guan Chenchen, 16, of China, is in Tokyo because of her beam routine — she won the World Cup series on beam to make the Olympics as an individual, separate from the Chinese team — and it showed in the qualifying round. She blew the rest of the field away with a score of 14.933, thanks largely to a difficulty score nearly half a point higher than that of any other qualifier.

Tang Xijing, 18, of China, had the second-highest beam score in qualifications, 14.333. But unlike Guan, who has had more than a week to recuperate from the qualifying round and prepare for the final, Tang — the 2019 world all-around silver medalist — competed on all four apparatuses in the team final and the all-around final and will be coming into Tuesday’s event tired.

Larisa Iordache, 25, of Romania, qualified fourth with a score of 14.133. The question mark is her ankle, which she appeared to hurt on her dismount. She is seeking her first individual Olympic medal after winning bronze with the Romanian team at the 2012 Games and after four years in which she tore her Achilles’ tendon, underwent three operations, had Covid, lost her mother and qualified for Tokyo by competing through a kidney infection.

Ellie Black, 25, of Canada, was the fifth-ranked qualifier with a score of 14.1 and a routine more difficult than any other finalist except Guan and Biles, but she has an ankle injury that kept her out of the all-around final. If she were to make the podium in spite of that, Black — who is the 2017 world all-around silver medalist and is competing in her third Games — would be the first Canadian to win an Olympic medal in women’s gymnastics.

Vladislava Urazova, 16, of Russia, qualified seventh with a score of 14.0. She won gold with the Russian team last week and was fourth in the all-around, but barring major mistakes from other competitors, she is unlikely to be a medal contender on beam because her difficulty score is only 5.8 — more than a point less than Guan’s and several tenths less than the average in this final.

Flávia Saraiva, 21, of Brazil, was the last qualifier to the final, scoring 13.966, and is at a similar disadvantage as Urazova because her difficulty score is 5.9. Like Iordache and Black, she may also be dealing with an injury; she appeared to hurt her ankle during her floor routine in the qualifying round. At the 2016 Olympics, she finished fifth in the beam final.