What We Learned From Week 16 of the N.F.L. Season

The Pittsburgh Steelers overcame a huge deficit to shock the Indianapolis Colts. The Kansas City Chiefs barely beat the Atlanta Falcons and the Baltimore Ravens continued their surge with a win over the Giants. The top spot in the A.F.C. playoffs has been decided — as has the No. 1 pick in next year’s draft — but even a few irrelevant teams showed some pluck Sunday. And the Green Bay Packers closed the night in style with a blowout win over the Tennessee Titans.

Here’s what we learned:

There is some fight left in the Steelers. Pittsburgh came into the day on a three-game losing streak, and appeared to be headed toward a fourth consecutive loss when it fell behind the Indianapolis Colts, 24-7, in the third quarter. From that point, the game belonged entirely to the Steelers. Ben Roethlisberger started the comeback in the third quarter by throwing a deep 39-yard touchdown pass to Diontae Johnson. He then added a 5-yard touchdown to Eric Ebron and a 25-yarder to JuJu Smith-Schuster in the fourth, as Pittsburgh’s defense shut down Indianapolis. The Colts’ final four drives resulted in two punts, an interception and a turnover on downs.

Pittsburgh, which clinched the A.F.C. North title with Sunday’s win, is currently a half-game ahead of Buffalo for the No. 2 seed in the A.F.C. playoffs. Indianapolis, which fell to 10-5, has been one of the N.F.L.’s better teams this season but is currently not in line for a playoff spot because the Baltimore Ravens and the Cleveland Browns own tiebreakers over the Colts. 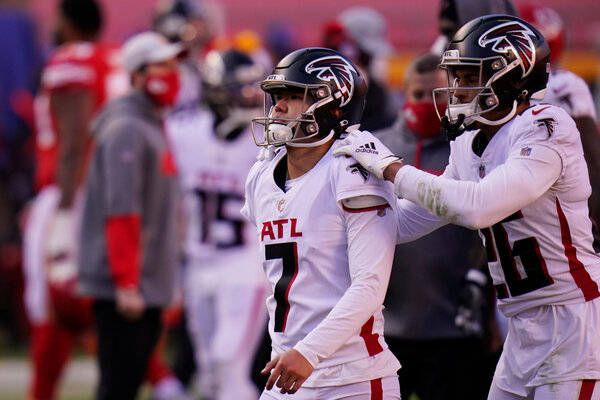 The Chiefs love to play with fire. A win was hardly necessary for Kansas City, as the Chiefs were virtually assured of the No. 1 seed in the A.F.C. playoffs even if they lost their final two games. But watching Kansas City barely hang on for a 17-14 win at home over the Atlanta Falcons reinforced the idea that Patrick Mahomes’s team tends to play down to its competition. A sloppy effort against Atlanta had the Chiefs losing, 14-10, with just over two minutes remaining, and would have headed to overtime if not for an unlikely miss from Atlanta’s Younghoe Koo, as the Pro Bowl kicker’s attempt at a game-tying 39-yard field goal sailed wide right.

Regardless of how close they cut it, the Chiefs improved to 14-1 and clinched the A.F.C.’s only first-round bye. Perhaps by the divisional round of the playoffs, the Chiefs will decide that it is important to try for the entire game.

The Ravens control their playoff destiny. Baltimore dropped to 6-5 with a loss to Pittsburgh on Dec. 2 — the team’s fourth defeat in five games — and seemed like a long shot to make the playoffs. A soft schedule, and a return to form by quarterback Lamar Jackson, has righted the ship and thanks to a 27-13 victory over the Giants, the Ravens can now secure the team’s third straight trip to the playoffs simply by beating the Cincinnati Bengals next week. Baltimore’s four-game win streak has included only one victory over a team with a winning record, but an average of 37 points a game is impressive no matter the opponent.

The Ravens, who thrive when chewing up huge chunks of yardage on the ground, have averaged 233.3 yards rushing a game in the four-game win streak after having been held to fewer than 200 in nine of their first 11 games.

There will be a division winner with a losing record. The Washington Football Team came into the day with dreams of finishing the season at 8-8, but a 20-13 loss at home to the Carolina Panthers dropped Washington to 6-9, meaning the N.F.C. East will be won by a team that is, at best, 7-9. The division’s teams have often been hard to watch, but they will provide the most exciting subplot of Week 17, as the Footballers, the Dallas Cowboys and the Giants will all go into the season’s final day with a chance at earning a playoff game at home. Washington can make it nice and simple by winning a road game against the eliminated Philadelphia Eagles — a result that would be far more attainable should quarterback Alex Smith return from a calf injury.

Frank Gore is going out in style. After a loss to the Los Angeles Chargers in November dropped the Jets to 0-10, Gore, 37, addressed his team’s struggles (and his own future), saying “You don’t want to go 0-16, especially if this is my last year. I can’t go out like that.” Last week Gore helped the Jets end their 13-game losing streak by scoring the 100th touchdown of his career. This week he ran for a team-high 48 yards as the Jets beat the Cleveland Browns, 23-16. In doing so, Gore joined Emmitt Smith and Walter Payton as the only players in N.F.L. history with at least 16,000 yards rushing — only two other active players, Detroit’s Adrian Peterson (14,757) and Tampa Bay’s LeSean McCoy (11,102), have more than 10,000.

Trevor Lawrence is moving about six hours south. The downside of Gore getting his wish to go out well with the Jets is the team having officially handed the No. 1 pick in next year’s draft to the Jacksonville Jaguars, which almost assuredly will lead to Lawrence, Clemson’s star quarterback, taking a long drive down I-95 to replace Gardner Minshew rather than heading north to replace Sam Darnold. The Jaguars were emphatic in their failure on Sunday, losing by 41-17 to the suddenly surging Chicago Bears. But at least on offense Jacksonville should be a terrific landing spot for Lawrence, as he will immediately be handed a good young running back (James Robinson) and two talented young wide receivers (D.J. Chark and Laviska Shenault Jr.)

Dalton has taken his lumps this season, but he had his first 300-yard game in more than a year and kept Dallas alive in the race for the N.F.C. East. Dalton’s memorable performance against Philadelphia included completions of more than 50 yards to three different wide receivers (Michael Gallup, Amari Cooper and CeeDee Lamb).

It is hard for other runners to seem notable after Alvin Kamara’s record-tying, six-touchdown performance for New Orleans on Friday, but Perine had a terrific day for Cincinnati in the Bengals’ 37-31 upset of the Houston Texans. Perine had a 46-yard run in the third quarter and put Cincinnati up to stay with a 3-yard score in the game’s final two minutes.

Adams had yet another dominant performance, with his three touchdowns in the snow against the Tennessee Titans helping Green Bay improve to 12-3. Adams now has an N.F.L.-leading 17 receiving touchdowns this season — the most by a player since Rob Gronkowski in 2011. With 1,328 yards receiving, Adams is just 58 short of tying his career high, which he set in 2018.

One* Sentence About Sunday’s Games

*Except when it takes more.

Chiefs 17, Falcons 14 It was a quiet day by Kansas City’s lofty standards, and the team’s running game looked far less effective without the injured Clyde Edwards-Helaire, but the Chiefs did have the silver lining of Travis Kelce reaching 1,416 yards receiving for the season, breaking the single-season record for a tight end set by George Kittle in 2018. Kelce has one more game to add to his total, provided Kansas City doesn’t rest him in next week’s irrelevant game against the Los Angeles Chargers.

Packers 40, Titans 14 Green’s Bay’s comfort in the snow was evident as the Packers made quick work of Tennessee. Aaron Rodgers had the same number of touchdowns (four) as he had incompletions, A.J. Dillon and Aaron Jones rushed for a combined 218 yards and Davante Adams scored three times.

Steelers 28, Colts 24 At halftime, Indianapolis was romping to an easy win. The second half was another story, as the Steelers stopped trying to dink and dunk themselves to victory and had their aggressiveness pay off in spades, with the team earning its first A.F.C. North title in three seasons.

Seahawks 20, Rams 9 It was hardly an explosive effort, but Seattle clinched the N.F.C. West title, kept alive a small chance at a first-round bye, and continued to show dramatic improvement on the defensive side of the ball. Despite its loss, Los Angeles controls its own fate next week. A win would give the Rams a wild-card spot in the playoffs.

Ravens 27, Giants 13 The Giants’ third straight loss was largely a result of Baltimore’s offense overwhelming them, but the Ravens’ defense had a fine day as well, making Daniel Jones’s life miserable with six sacks and 11 quarterback hits.

Jets 23, Browns 16 It took a total team effort for Cleveland to lose, with Baker Mayfield completing just 28 of his 53 passes, the Browns’ celebrated running game averaging just 2.5 yards a carry and the team’s defense making the Jets’ Sam Darnold look downright competent. A win would have clinched a playoff spot for Cleveland, but the Browns will now go into Week 17 fighting with Miami, Baltimore and Indianapolis for the three wild-card spots in the A.F.C.

Panthers 20, Footballers 13 Curtis Samuel put on a show for Carolina, piling up 158 yards from scrimmage, but the story of the day was quarterback Dwayne Haskins being benched for ineffective play on the heels of losing his captaincy as a result of off-field behavior. You have to assume that Haskins’s days in Washington are numbered.

Cowboys 37, Eagles 17 Everything went right for Dallas, with Andy Dalton throwing for 377 yards and three touchdowns, Ezekiel Elliott rushing for 105 yards and Michael Gallup, Amari Cooper and CeeDee Lamb all putting on a show against Philadelphia’s overwhelmed secondary. Jalen Hurts topped 300 yards passing for a second consecutive week, but wasn’t able to turn that yardage into enough points.

Chargers 19, Broncos 16 Denver had the ball with a chance to win the game in the final minute, but Drew Lock’s desperation heave was intercepted, handing Los Angeles its sixth win of the season.

Bears 41, Jaguars 17 It is not like Jacksonville had any motivation to win — quite the opposite — but watching Chicago put up 28 consecutive points to start the second half couldn’t have been very fun. Chicago’s win, combined with Arizona’s loss on Saturday, has the Bears in line for the N.F.C.’s final wild-card spot. That sets up an entertaining Week 17 in which Chicago closes its season with a home game against the top-seeded Green Bay Packers, and the Cardinals have a tough matchup on the road against the Los Angeles Rams.

END_OF_DOCUMENT_TOKEN_TO_BE_REPLACED

END_OF_DOCUMENT_TOKEN_TO_BE_REPLACED
Recent Posts
We and our partners use cookies on this site to improve our service, perform analytics, personalize advertising, measure advertising performance, and remember website preferences.Ok