Home » Sport » Why the Nets May Be the Most Feared Team in the N.B.A.

Why the Nets May Be the Most Feared Team in the N.B.A.

So it turns out that when you put three elite players together in their primes, the result is some elite basketball.

The Nets’ grand experiment combining Kyrie Irving, Kevin Durant and James Harden in one on-court souffle is a work in progress. But at the halfway point of the season, the Nets may be the most feared team in the league. They are 10-1 in their last 11 games and 17-7 since trading for Harden in January.

In some ways, it is a challenge to draw any lasting conclusions from the Nets’ first half, in the same way it would be to assess Thanos’s powers early in the Marvel universe films. They aren’t fully formed.

The most jarring data point is that the Nets have barely scratched the surface of their super trio. Durant, Irving and Harden have played together in only seven games, as a result of nagging injuries and rest. The Nets are 5-2 in those games. One of those losses — a close one against the Toronto Raptors — was with Durant coming off the bench.

All three are playing some of the best basketball of their careers, and they have barely been able to do it together. It’s possible that being apart is what has allowed them to thrive. Even so, the Nets are just a half-game behind Philadelphia for the top spot in the Eastern Conference.

Here is a look at what to expect from the Nets in the second half of the season and what they’ve done right so far. 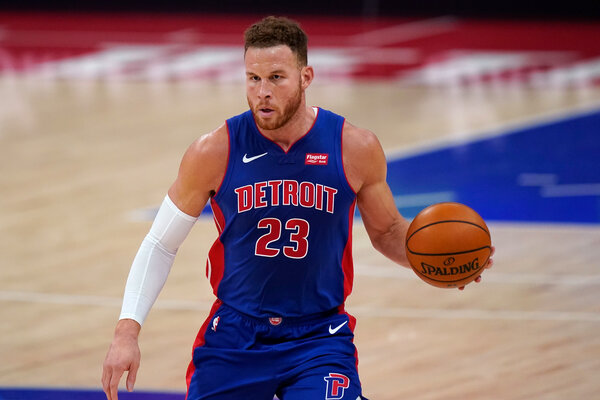 The way that championships have been deemed by the public (and the media) to validate a player’s career incentivizes talented players to join already talented teams, even for lesser roles. This often shows itself in midseason when productive players get bought out and land on contenders to try to chase a championship.

The trade deadline is March 25. Two players on the Nets' radar are surely Andre Drummond of the Cleveland Cavaliers, who is on track to become one of the greatest rebounders in league history, and Blake Griffin of the Detroit Pistons, who is one season removed from one of his best years. The Pistons announced Friday that they had reached a buyout agreement with Griffin, and the same could happen for Drummond in Cleveland.

The Nets are likely to be serious contenders for their services, and that of other players who could be on the move because of their age and their team’s priorities, such as Al Horford and George Hill of the Oklahoma City Thunder. The Thunder are in the middle of a youth movement.

The Nets are in a position where they don’t have to give up anyone. They just have to be patient. (And even if they wanted to, they don’t really have many attractive trade pieces, especially with Spencer Dinwiddie injured.)

A Happy Harden Is Sad News for Opponents

In Harden’s eight games with the Houston Rockets this season, it was clear he was not putting in the effort. He was often jogging, uninvolved in the offense and otherwise lethargic.

But it goes to show you: Sometimes being petulant pays off. In Brooklyn, Harden has been motivated and, as a result, exceptional. In 23 games, Harden is averaging 11.4 assists (on pace for a career high and to lead the league), shooting 49.7 percent from the field and 42.2 percent on 3-pointers. Harden would be a top M.V.P. candidate right now if not for the stellar play of Irving and Durant.

He has flowed seamlessly with Irving on and off the ball, often creating easy opportunities not just for role players, but also for Irving, who has thrived in the shooting guard role.

Since the Harden trade, the Nets have had the league’s best offense, without the team’s stars playing all together much.

And this isn’t surprising for a team with Harden and Irving, but the Nets are near the top of the league in isolations. When you have so many elite scorers, as Coach Steve Nash does, you have the luxury of letting them go to work and break down defenses one-on-one.

What to watch out for with Harden is whether his conditioning will cause a drop-off later in the season. But for the first time in a long time, Harden won’t be expected to carry an entire offense by himself, so it may not matter.

The Nets’ Defense Is Bad — and That’s OK?

Before Harden arrived, the Nets were 13th in defense. Not great, but just above average. With Harden, the team’s defense has tanked, all the way to 26th, among the worst in the league. Even over the Nets’ recent 10-1 stretch, the defense was still below average.

Some of this can be chalked up to injuries. Durant is the team’s most versatile defender, and he has missed roughly half the season and hasn’t taken the floor since Feb. 13 because of a left hamstring strain.

So can a team with a bad defense win the championship? Yes, actually. But it’s rare.

A truly bad defensive team that won a championship was the 2000-1 Los Angeles Lakers, led by Shaquille O’Neal and Kobe Bryant. That team was 22nd. Incidentally, the year before, when they also won the championship, the Lakers led the league in defense. Go figure.

The Nets will start the second half with a fairly soft schedule: 11 of their first 20 games will be against teams below .500. Of the other nine contests, four are against the Boston Celtics, the Miami Heat and the Knicks, three teams hovering around .500.

The Nets’ Big Three should be able to use this time to jell, at the expense of less-talented teams.

The Role Players Are Getting It Done

It’s easy to keep all the attention on the stars, but Sean Marks, the general manager, has also assembled a solid surrounding cast.

Jeff Green, the 34-year-old veteran, has been a bargain. He has started 16 of his 33 games this season and averaged 9.5 points per game on a career-high 50.7 field-goal percentage. And he is also shooting 42.2 percent from 3, which is essential to take pressure off the Nets’ main scorers. He is the kind of player who knows his limits and rarely makes mistakes. Green also has 72 playoff games under his belt, including a trip to the finals — experience that should come in handy in the spring.

Joe Harris is also having a career year, fresh off landing a big contract. He is shooting a whopping 50.6 percent from 3-point range. That is ridiculous. Last year, no one finished above 46 percent. In fact, no one has since Kyle Korver in the 2009-10 season.

Bruce Brown has been a revelation for the Nets, both as a fill-in starter and otherwise. He is averaging 8.6 points per game and 59 percent shooting. In his last six games, he is averaging 18 points, which has helped fill some of Durant’s absence. He dropped a career-high 29 points against the Sacramento Kings on Feb. 23.