Why the Panthers are resigned to losing grand final hero Crichton

The Panthers concede that they won’t have the money to match any significant offers from rival clubs for premiership-winning back Stephen Crichton.

The club is paying the price for its ongoing success – two premierships, two minor premierships and three grand finals in three years – and trying to reward as many players as possible in the way they deserve. 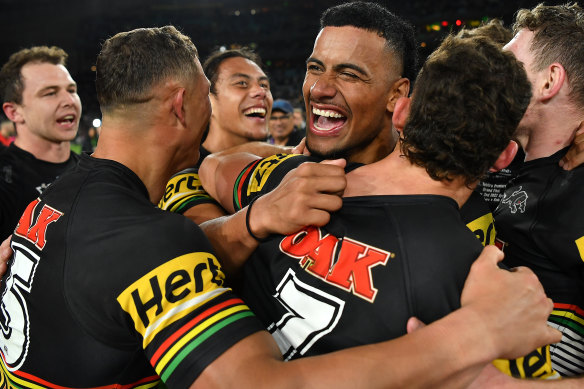 Stephen Crichton’s days at the Panthers could be numbered.Credit:NRL Photos

Crichton is being strongly linked to the Bulldogs. The club needs a top-quality fullback, and Crichton has the ability to be just that.

“In the negotiations Matt Cameron [Penrith District Rugby League Football Club chief executive] has had with Stephen’s manager he has made it clear he wants a chance at fullback, and the spin-off of that is that he wants fullback money,” Panthers Group chief executive Brian Fletcher said.

“We respect that and understand his desire to go to market. We don’t have the money we anticipate he will command, and if that happens we understand, but we already have one of the best fullbacks in the NRL [Clive Churchill Medallist Dylan Edwards], so it’s hard to see how Stephen can play fullback with us. He will still be with us in 2023 regardless.”

Crichton is already on the way to being considered a big-game player. His knack of scoring tries when they really matter is reminiscent of Brett Kenny, who scored doubles in three straight grand finals from 1981-83.

Crichton, of course, scored a crucial intercept try in Penrith’s 14-12 win over the Rabbitohs in the 2021 decider and grabbed another as they went back-to-back last season with their big win against Parramatta. He also scored a four-pointer in Samoa’s recent World Cup final loss to Australia.

Crichton has been linked to other clubs but his history with ex-Penrith assistant Cameron Ciraldo would make a switch to the Bulldogs a logical next step.

Cameron Ciraldo has admitted that the comfort he took from “secret” meetings with Bulldogs general manager of football Phil Gould played a significant role in his decision to sign with the club.

This column revealed in August how Gould went to extraordinary lengths to ensure the pair were never seen together in public, including turning off CCTV at meeting places. 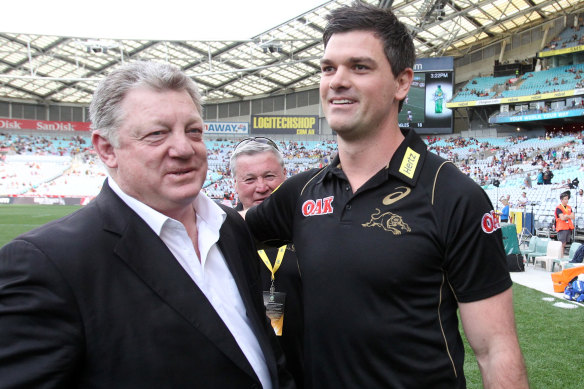 Cameron Ciraldo and Phil Gould when they were both at the Panthers.Credit:NRL Photos

Gould is a master tactician and knew how important it was for Ciraldo to have his trust in the negotiations, and he knew what a big decision it was for the young coach on a number of levels. The impact on his family was at the top of that list.

The image of Ciraldo in Fiji at the funeral of Viliame Kikau’s father shows his commitment to his players and the club, but it also highlights one of the great challenges he faces as a coach and as a dad of five kids. It has received almost no attention, but Ciraldo is now juggling one of the toughest jobs in sport as an NRL head coach with being a committed father.

“It’s not something I took lightly,” he said. “Family, kids, it was a huge consideration. I put a lot of thought into it and, you know, had to make sure that I was ready. Not only if I was ready, but the family was ready, and I feel like we got to that point and we’re all excited for the challenge ahead.”

Gould knows Ciraldo extremely well from their time at Penrith, and his tactic of hiding his meetings with the coach proved crucial.

“I knew Gus was serious, and it was good to know the levels he went through — itwas obviously pretty elaborate,” Ciraldo said. “But you know, at the end of the day, the fact that he was able to keep it secret to give me my time and space to be able to have those conversations and make those decisions was really important to me.

“You know, I’m not the kind of guy that rushes into anything. So to be able to go away and think about things without having the pressure of someone wanting a decision was really important. Gus told me about it and I think he told me to make me feel comfortable, and it did.”

Gould knew Ciraldo would appreciate his covert activities because he is a deep thinker.

“I’ve always been like that,” Ciraldo said. “It probably caused me problems as a player, just overthinking and things like that. But I’ve learned to understand that and understand my own personality over the last few years and, you know, that’s why it’s really important to have good people around me here that supplement my strengths and weaknesses. So I’m really excited about the team we have put together.”

Marnus Labuschagne’s coach has hit back at constant media criticism of the world’s No.1 batsman.

Neil D’Costa has guided Labuschagne from obscurity to his lofty position as the world’s best, but in recent times commentators – headed by Fox Sports’ Mark Waugh – have been critical of Labuschagne due to the number of times he has been dropped during his career. Fox even prepared stats that showed what Labuschagne’s career average would be if the chances had been snapped up. 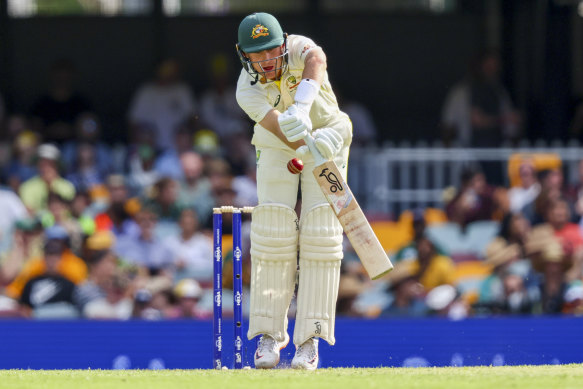 “I’ve heard about this line of commentary,” D’Costa said. “There are many more nuances in the game that need discussion and that I’d like to discuss. Nowadays, I know that Mark Waugh’s real business is his horse racing – I often wonder how much luck is invoked in that sport?

“They really must not have anything else to discuss. Look, Marnus doesn’t drop the catches – it’s not his fault – but to focus on that really takes away from the hard work he has done to get to where he is.

“He is as dedicated as anyone in the game and should be recognised for that, not as a fluke. It’s boring and disrespectful to focus on this. I mean, in the history of the game, how many centuries are without chance, and I’m sure a few bowlers from a few years back would like DRS on Mark Waugh.

“These comments and the repetition of them has a real personal tone. I don’t think this will impact Marnus because he is not sitting there watching the commentary, and it won’t impact me any more. I have options – I can hit the mute button and listen to the radio, and I advise others to do the same.”

Clash of the titans

Part of the impasse between the NRL and the Rugby League Players Association over a new collective bargaining agreement is a falling-out between NRL chief executive Andrew Abdo and players union boss Clint Newton.

Their relationship has never been an easy one, but it has become increasingly strained in recent times as the negotiations have dragged on. ARL Commission chairman Peter V’landys is going to need to make their relationship workable in the future.

If there was anyone doubting the maturity of Joseph Suaalii then you only need to look at his off-season travels to gain an insight into the young man.

After deciding to represent Samoa at the World Cup rather than hope to play for Australia, he took off on a trip largely on his own.

He did that for a simple reason: he wanted to see the world without distractions. He has also been seeking out someone to teach him the language of his heritage, Samoan.

The NRL’s All Stars clash is on the move to Rotorua in New Zealand next year, which is great in theory.

The issue is there is a big triathlon on that weekend in the town, making accommodation scarce and expensive. That may not be a concern for the NRL heavyweights, but the average punter had better be prepared to travel as staying in town won’t be easy.

Michael Clarke has made plenty of headlines in his role as a host of the Big Sports Breakfast with some controversial statements, but he has a decision to make about his future.

Clarke has made an excellent transition from TV to morning radio and has been offered a new two-year deal. He loves working with Laurie Daley and Gerard Middleton, but the big issue is him juggling his most important role – as a dad. School mornings are never easy when you’re on breakfast radio.

To many rugby fans, if you think Randwick, you think the Ella brothers. The three – Mark, Glen and Gary – have, fittingly, been made life members of the club.

The brothers are honoured. It just feels 20 years too late. That’s not only this column’s view, it’s a sentiment that many of those close to the family share.

See you next year

A happy Festivus to all those who enjoy reading this column. And an extra special mention to those who say they don’t. I’ll be back some time in February ready to take on another year.