Home » Sport » With Her Candor, Osaka Adds to Conversation About Mental Health

With Her Candor, Osaka Adds to Conversation About Mental Health

Naomi Osaka’s withdrawal this week from the French Open stunned tennis. But her decision was also a potent example of a movement among elite athletes to challenge the age-old notion that they are, and must be, as peerless in mind as they are in body, untroubled by the scourge of mental illness.

Ms. Osaka, the highest-paid female athlete in the world, who said she had faced “long bouts of depression” since she won the United States Open in 2018, was only the latest addition to the fast-expanding roster of renowned players across sports who have spoken out about mental health.

Taken together, the disclosures by these athletes, who have sometimes been empowered by social media and word of one another’s experiences, have pushed the subject from the recesses of the sports world squarely toward the center of modern life’s biggest stages. And they are forcing the sports community to acknowledge that the pressures of competition have assuredly contributed to illnesses among some stars — and that those stars were never untouchable.

“There’s more acceptance of the fact — and more understanding of the fact — that mental health is a real thing, and in the athletics realm, it takes serious bravery for these high-profile athletes to come out and use the word ‘depression’ or use the word ‘anxiety,’” said Jamey Houle, the lead sports psychologist at Ohio State. He was also an all-American gymnast there.

“The vulnerability,” he added, “leads to doors being broken down, stigma shrinking a little bit more and people getting more help.”

Before Ms. Osaka’s announcement on Monday, the swimmer Michael Phelps publicly discussed in recent years his history of depression and anxiety. The gymnast Aly Raisman has described her efforts to cope with post-traumatic stress disorder. Brandon Marshall, who spent 13 seasons in the N.F.L., has talked about his diagnosis of borderline personality disorder. The basketball players A’ja Wilson, DeMar DeRozan and Kevin Love have spoken about their depression. Amanda Beard, who made her Olympic swimming debut in Atlanta when she was 14 and struggled with depression and self-injury, titled her 2012 memoir, “In the Water They Can’t See You Cry.”

It was not all that long ago that many of those deeply personal stories were carefully hidden from public view. Late one night less than five years ago, in her bed in a dorm room, Victoria Garrick went online looking for help. She was a volleyball player at the University of Southern California, and her mind was in peril: anxious, worried, pressured toward perfection.

“I remember Googling and not being able to find anyone or athletes who made me feel less alone,” Ms. Garrick said in an interview on Tuesday. 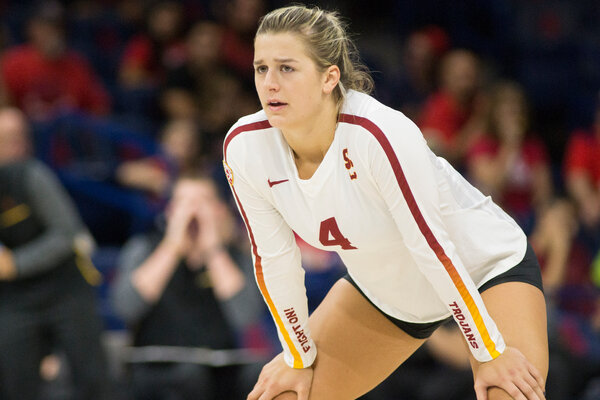 “If you type in ‘athlete depression,’ you’re going to find the best athletes in the world being vulnerable and sharing what they’ve been through,” she said. “That is a huge difference. It says that you can be an elite athlete — the best in the world — and you can still experience anxiety.”

But generations of athletes hardly felt they could be as transparent.

The attention to the illness of Jimmy Piersall, a professional baseball player who was admitted to a mental hospital in 1952 and whose illness was later the subject of a book and film, “Fear Strikes Out,” was distinctive because it was so far from the rule at the time.

In high school in the late 1990s, Dr. Houle kept his sessions with a sports psychologist secret because, he recalled Tuesday, he worried that “people would think I had lost it or that I was mentally weak or something like that.” Into the 2010s, even as society became more accepting of mental health struggles, athletes who ultimately chose to detail their health histories often hesitated out of fear that they would be seen as unfit and diminished.

“The stigma is almost increased even further in our sports world because of the idea that weakness is something that you never show, weakness is not a part of being that athlete, of being elite, of being the best,” said Leeann Passaro, who played soccer at Washington and Lee University in Lexington, Va., and now works with Ms. Garrick at an advocacy group, the Hidden Opponent, which focuses on well-being in sports.

“Her being in it right now and coming out and saying something is a lot different than the athletes who have said something in reflection,” said Ms. Passaro, who has dealt with anxiety and depression.

Although many tennis players had been reluctant to embrace Ms. Osaka’s choice to avoid reporters at the French Open, which she announced last week, some who remained in the tournament field in Paris said on Tuesday that they respected her decision to explain more about her challenges.

“No one knows what any one of us is going through; no matter what they choose to share publicly, you don’t know what is on the inside,” said Ann Li, 20, an American tennis player.

Jennifer Brady, another American player, has spoken openly about her struggles with confidence. She said the experience of sitting in front of a microphone and talking about her emotions to a room brimming with strangers is anything but ordinary.

“It’s something that is not very easy to talk about, even with people you’re comfortable with,” Ms. Brady, 26, said. “It’s really hard for me to open up, and it’s not something that comes naturally.”

Still, Matthew Smith, a professor of health history at the University of Strathclyde in Glasgow, said in an email that his research suggested athletes appeared more willing to discuss mental health over the last decade or so than before. They were perhaps partly driven, he said, by suicides and abuses in sports that had stirred wider conversations about topics once deemed taboo.

“Historically, athletes have been reluctant to talk about their mental health, not least because it could be used against them,” he said. He noted that sports were rife with problems, including racism, homophobia, sexism and perfectionism, that can contribute to struggles with mental health.

Despite that record, athletes and researchers said disclosures by figures as prominent as Ms. Osaka and Mr. Phelps made it far more difficult for fans, coaches and sponsors to play down mental health and not see it as worthy of careful monitoring and treatment.

Dr. Houle speculated that a few decades ago, when substance abuse was maybe the most discussed element of mental health in sports, tennis figures would have dismissed Ms. Osaka’s trials as “nerves” caused by a major tournament. This week, though, her statement provoked an outpouring of support from the world’s leading athletes, even if some worried that she had effectively been bullied into a disclosure as she clashed with tournament organizers over required appearances at news conferences.

“Mental health is not a joke, this is real and serious,” Lewis Hamilton, the Formula 1 driver, wrote on Twitter on Tuesday. “This takes a lot of courage to do.”

He added, “Let’s all make sure Naomi knows she’s not alone.”