CHICAGO – The New York Yankees acquired AL home run leader Edwin Encarnación in a trade with the Seattle Mariners on Saturday night, adding another feared slugger to what could be baseball's most powerful lineup when Aaron Judge and Giancarlo Stanton return from injuries.

The Yankees also got cash in the deal while sending 19-year-old minor league pitcher Juan Then to Seattle. Encarnación is making $20 million this season. 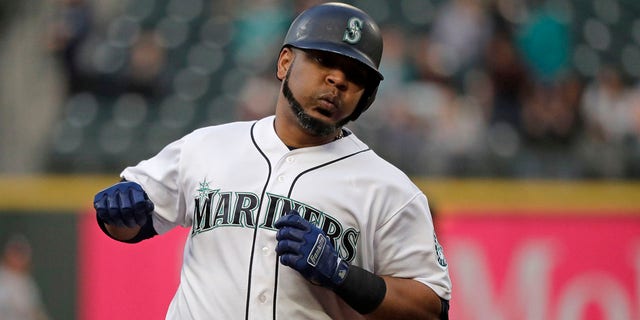 Seattle Mariners’ Edwin Encarnacion rounds the bases after hitting a solo home run against the Houston Astros on June 3, 2019, in Seattle. (Associated Press)

The 36-year-old Encarnación has hit 21 home runs this season. He has averaged 37 homers and 109 RBIs in his last seven years.

There had been speculation the Yankees would be in the market for a top pitcher as the July 31 approached, but the Bronx Bombers always have room for big boppers.

"We know Edwin is a really good hitter," Gleyber Torres said after homering for the AL East-leading Yankees in an 8-4 win over the Chicago White Sox.

Encarnación was not on the field with the Mariners as they warmed up for their game at Oakland. The Yankees and Mariners announced the trade right after Seattle lost 11-2.

"Edwin did great things here for us. I really think a lot of him, how he went about his business here, knowing that this could probably happen," Mariners manager Scott Servais said. "It's hard to go out and produce the way he did. He did everything we could ask him. He's leading the league in home runs, he's been awesome in our clubhouse. Certainly wish him the best."

Encarnación, a first baseman and designated hitter, is hitting .241 and is among the league leaders with 49 RBIs and 48 runs scored. The three-time All-Star moved from Cleveland to Seattle last December in a three-team trade that included Tampa Bay.

Encarnación has 401 career home runs, including 18 in 69 games at the new Yankee Stadium.

The Yankees have been one of baseball's best teams despite a long list of injuries.

Stanton could return next week after being sidelined by biceps, shoulder and calf injuries, and Judge also is inching closer after he strained his left oblique in April. Both stars are on rehab assignments in Triple-A.

Encarnación's arrival means more juggling for the Yankees, who will have a roster full of talented players once everyone returns from the injured list. Last month, they acquired first baseman/DH Kendrys Morales from Oakland, but he's struggled with New York.

Seattle either traded or let go many of its big-name players after last season, with Nelson Cruz, Robinson Cano, Edwin Diaz and Jean Segura among them. The new-look Mariners got off to a 13-2 start this year, but have since faded into last place in the AL West. They recently traded outfielder Jay Bruce to Philadelphia.

The Mariners said Then, who has been pitching in extended spring training, will report to Class A Everett. Originally signed by Seattle, he was traded to the Yankees after the 2017 season in a deal for pitcher Nick Rumbelow.

"We'll look at a lot of different guys as we continue to move down the road and do this rebuild thing," Servais said. "We've gotten a lot of young prospects back. Unfortunately, they're not all here yet. It's our job here to take the guys we've got and get the most out of them and get them to continue to improve, and that's what we're going to do."