Derek Jeter will finally be enshrined into the Baseball Hall of Fame on Wednesday after a 20-year career with the New York Yankees that saw him and the team win five World Series titles.

Ahead of the official ceremony, the Yankees posted a near-6-minute video showcasing Jeter’s career, from his start with the team in 1995 to his last games in 2014. Billy Crystal narrated the clip. 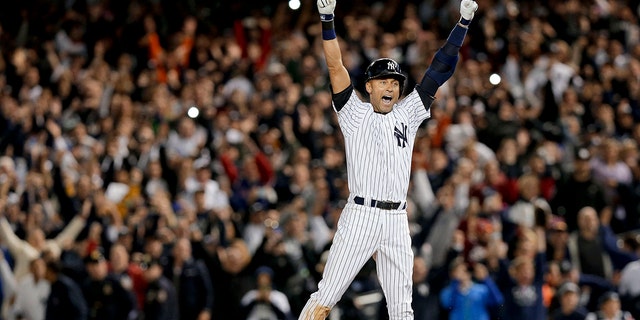 FILE – In this Sept. 25, 2014, file photo, New York Yankees’ Derek Jeter jumps after hitting the game-winning single against the Baltimore Orioles in the ninth inning of a baseball game, in New York. The Yankees won 6-5. It was Jeter’s last home game of his career at Yankee Stadium. The Baseball Hall of Fame will induct Jeter on Wednesday, Sept. 8, 2021. (AP Photo/Julie Jacobson, File)
(AP Photo/Julie Jacobson, File)

From the 1996 MLB Postseason with the Jeffrey Maier catch, to “The Flip” in the 2001 playoffs and the walk-off home run in the 2001 World Series, to the dive into the stands against the Boston Red Sox to make a catch to finishing his career at Yankee Stadium with a walk-off single, there was no short of legendary moments to remember “The Captain.”

“I never wanted my career to be over and then for me to say, ‘Well, I wish I would have done a little bit more.’ Ultimately, you’re judged, especially in New York, by winning. They remember you if you win.”

He will be inducted with Larry Walker and Ted Simmons.