Ten years after blessing the world with Bridesmaids — and earning an Oscar nomination for it — Kristen Wiig and Annie Mumolo are back as Star (short for Starbara) and Barb (just Barb) in Barb and Star Go to Vista Del Mar, a comedy about two Midwest BFFs who embark on the trip of a lifetime to the glamorous Florida coast.

“We never get to go on vacation, we’re working, so this movie is inspired by the trip Kristen and I want to take together,” Mumolo tells ET. “It’s our sort of wish-fulfillment trip.”

The trip isn’t all cocktails by the pool and posing for caricature drawings, as Barb and Star find themselves mixed up with a handsome but mysterious stranger (Jamie Dornan). At the end of the day, though, the movie is about friendship. It’s a colorful, musical, downright absurd adventure that scratches the itch for a vacation we can’t go on right now.

“We all need an escape, and laughter really does help,” Wiig says. “I’m hoping people see this as an escape. It’s a silly, fun time that doesn’t take itself too seriously. We just want to make people laugh. I think we need that right now.”

ET is exclusively debuting the first trailer for Barb and Star Go to Vista Del Mar, which you can watch below, and read on for Mumolo and Wiig’s chat with ET’s Lauren Zima about how the titular characters almost made their debut in Bridesmaids.

ET: I know you know this, but Bridesmaids couldn’t be more iconic. Why were Barb and Star the perfect duo to bring this duo together again?

Kristen Wiig: Oh my gosh. I feel like we just naturally turn into these ladies. Like, I feel like Barb and Star is us in just a few years. [Laughs] Minus the hair. But I don’t know. I mean, Annie and I laugh so hard when we write and just try to make each other laugh, and we wanted to [write] a very silly character movie.

Why was it 10 years between Bridesmaids and this project?

Annie Mumolo: Well, it takes a very long time to get a movie made. Bridesmaids took almost six years to get onto the screen, so it doesn’t feel like we took a break. This movie took about five years, so we actually don’t feel like we had a break in there. It feels like we’ve always been working on it or on something.

Is this true: I heard these characters were almost in Bridesmaids.

Kristen Wiig: Ish. Not us playing them, but when we were writing the movie, we had these scenes with Lillian, Maya’s character, her mom and some of the other moms, and we would go off in these accents, being all these moms, and we wrote all these scenes. Towards the end, we were like, “These can’t be in the movie. This has nothing to do with our story.” So, we always had these characters and in the back of our mind they just lived on and we couldn’t let them go.

And what about the looks, how did you come up with Barb and Star’s aesthetics? I would imagine, did you have to go thrifting to find some of this stuff?

Kristen Wiig: Believe it or not, a lot of those are clothes that are made now. [Laughs] Going through those fittings, that was just so much fun.

Annie Mumolo: It’s like when you go on vacation and you go into those sort of beachwear souvenir shops, we pulled from there. And Kristen and I send each other photos a lot when we’re in those shots of different, like, beach capes and stuff like that.

Kristen Wiig: And, “Would my mom wear this?”

Barb and Star have one of those female friendships we love to see. They’re up there with the Romy and Micheles and Lucy and Ethels. What were your hopes for these friends?

Kristen Wiig: First of all, Romy and Michele is one of our favorite movies and we were very much inspired by their relationship when we wrote this movie, so that’s a huge compliment. Sort of that tone of these two friends that are in their own world, that someone could say something almost insulting to them and they would take it as a compliment. They speak the same language and they’re just best friends through and through.

Annie Mumolo: I do think we wanted to see these women that you wouldn’t normally look at on the street — you know, they’re ladies, they’re gals — we wanted to, like, take these ladies and take them on a great adventure and let ’em be heroes. 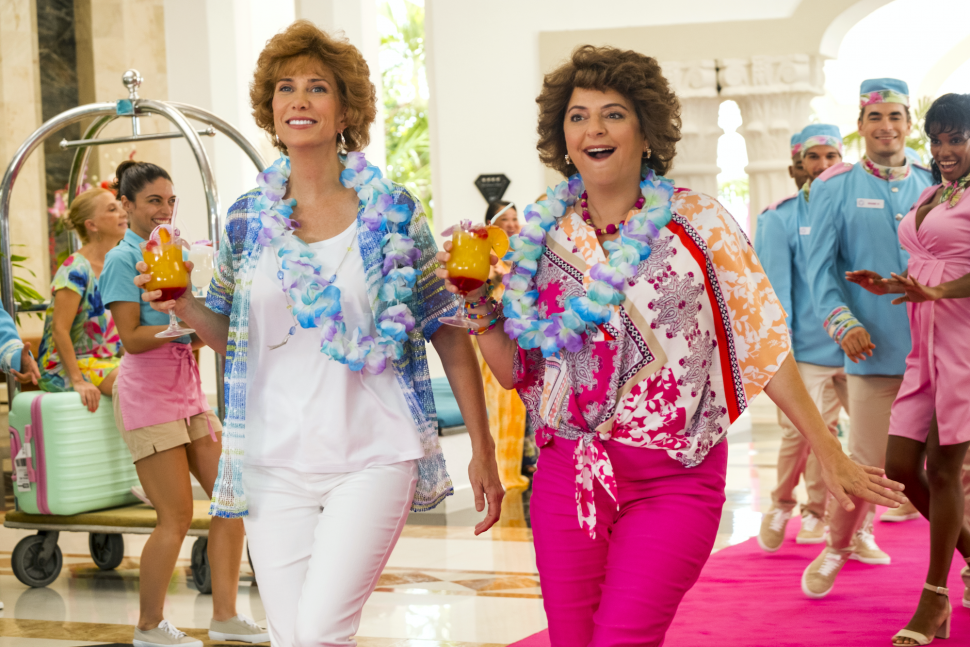 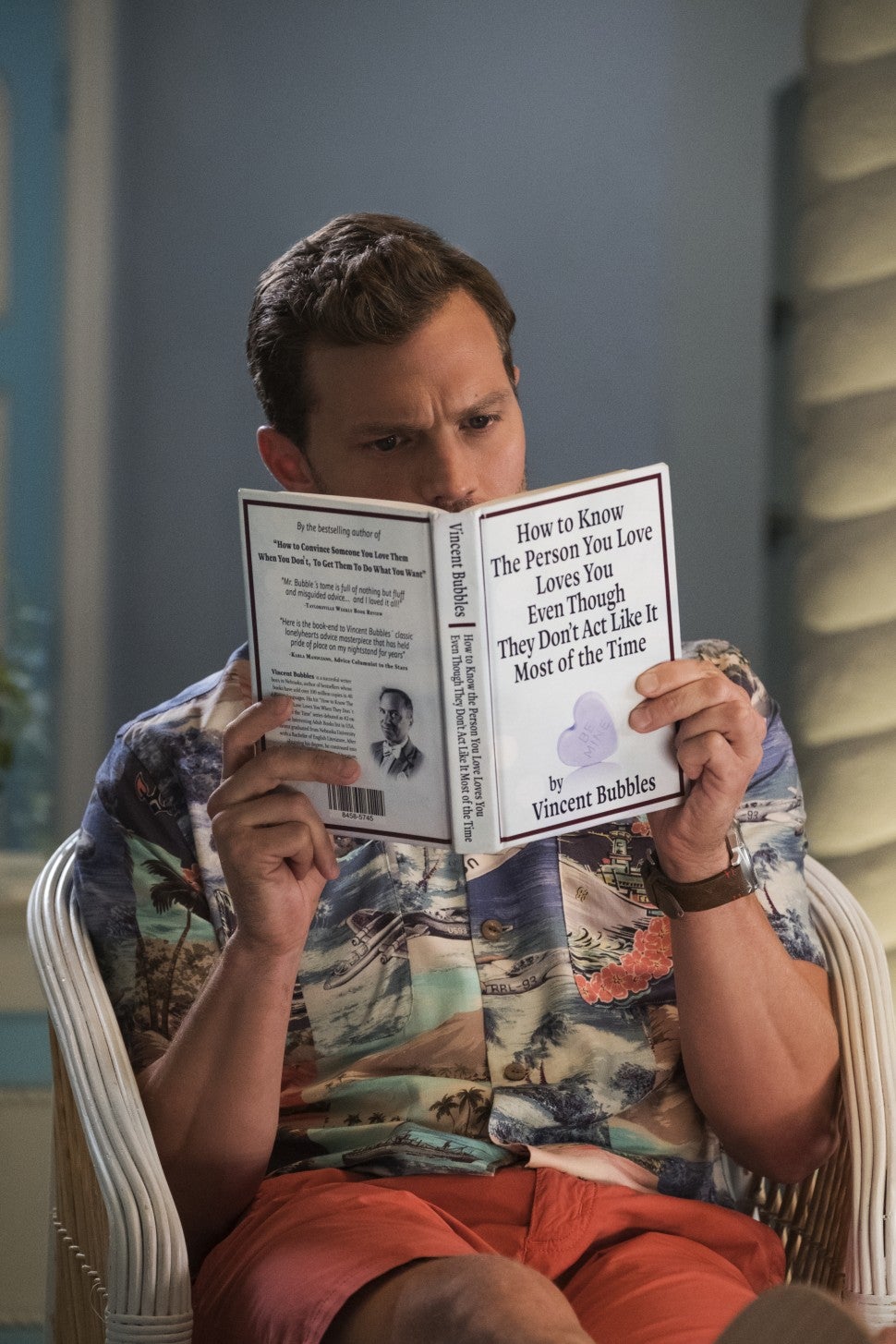 What can you tease about some of the famous faces we’ll see in this? Of course, we have Jamie Dornan.

Annie Mumolo: Jamie is hilarious. He is one of the funniest people. We had the best time. He’s incredibly witty. He’s so funny.

Kristen Wiig: You can kind of tell that he has this sense of humor when you see him interviewed and stuff, and he has played a lot of serious characters, but for people to see this side of him, I mean, when we met him and talked to him and we started going through the script, he was so game. And that’s not always the case. He was kind of up for anything and he added stuff and improvised and he was just hilarious. We’re so excited for people to see him in this.

I think audiences are going to be a little jealous of Barb and Star, too. They get to do quite a lot with Christian Grey.

Kristen Wiig: We don’t want to spoil anything, but we did write this! [Laughs]

Did you have Jamie in mind for the part, or was he a casting surprise?

Kristen Wiig: As an ideal, yes, but the fact that it happened still, we’re still surprised.

And your little scene stealer, who is in the trailer biking and lip syncing to Barbra Streisand. What a superstar in the making.

Kristen Wiig: His name is Reyn, and he is sunshine. When we saw his audition — I’m not kidding — I recorded part of it on my phone, I watched it on my phone over and over, we were texting like, “We need to make sure his schedule is clear, because we need this person in the movie.”

Kristen Wiig: Even just the way he would say “hi” and started the audition, he’s just love and joy and so hilarious.

With the anniversary of Bridesmaids, I have to ask you, looking back, do you have a favorite scene or a favorite line if you had to pick one? Annie, the scene you’re in is mine.

Kristen Wiig: It’s so hard to pick one. It’s really hard to pick one. I think the bridal shower, just showing up and seeing the set and all the people that were there, and, you know, it’s our first movie. Writing that scene and then seeing, like, the chocolate fountain and all these things that were in the script come to life, we were just like, “Oh my gosh, this movie is real.” It was very exciting.

It happened, and it became this movie that we all love so much. Now that you’ve reunited for this movie, is there any world or project where we get the whole Bridesmaids gang back together?

Kristen Wiig: Oh, that would be amazing. Let’s hope! We don’t have anything on the books right now.

Annie’s eyes got wide. Do you have an idea percolating?

Annie Mumolo: No, I was just thinking about how hard it would be to get everybody together with their schedules. And just revisiting how it’s not easy to get a movie made in general and the process of getting that group together the first time and assembling that movie, it was years! That’s why my eyes went wide. 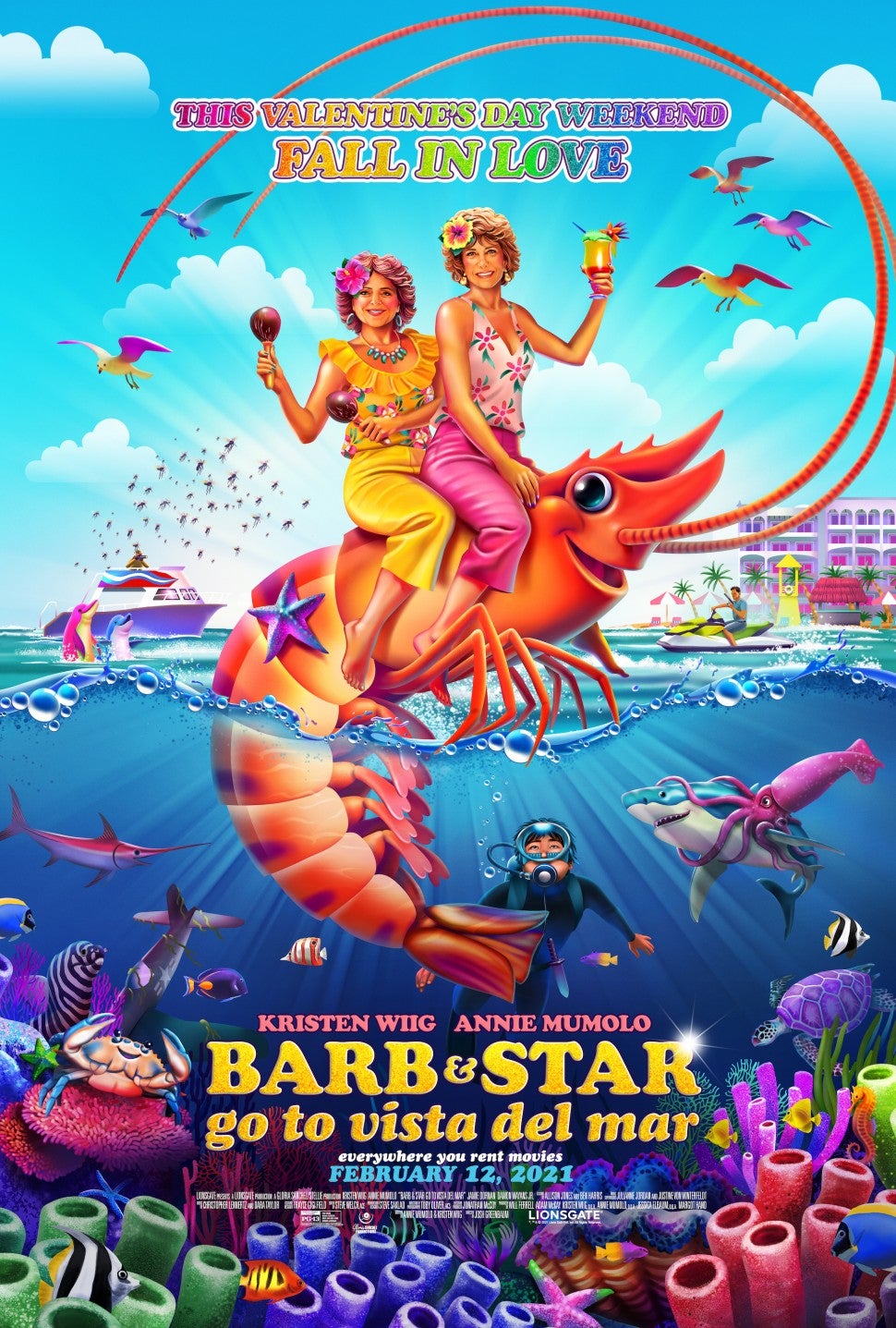 Barb and Star Go to Vista Del Mar is available everywhere you rent movies on Feb. 12.