Dan Walker was keen to hear from Priti Patel about a number of issues currently hitting the headlines at the moment on BBC Breakfast today. From a shortage in COVID testing and police reform to the Government’s new ‘rule of six’, Walker had plenty on the agenda to work through. However, the BBC One presenter found himself interjecting a number of times and cutting off Ms Patel’s answers, leading several viewers to brand the interview a “car crash”.

During their interview, Ms Patel remained adamant that COVID testing was available up and down the country, despite reports people were being sent hundreds of miles to retrieve their nearest kits.

However, Walker was quick to pull the Home Secretary up on the issue telling her it “was reality” when she suggested there was no shortage in tests – particularly in harder hit areas like Bolton.

The two also clashed when Walker probed whether or not Ms Patel would report people she saw defying the Government’s new ‘rule of six’ law.

With Ms Patel failing to give a yes or no answer, Walker took it upon himself to interject numerous times to try and clarify her stance. 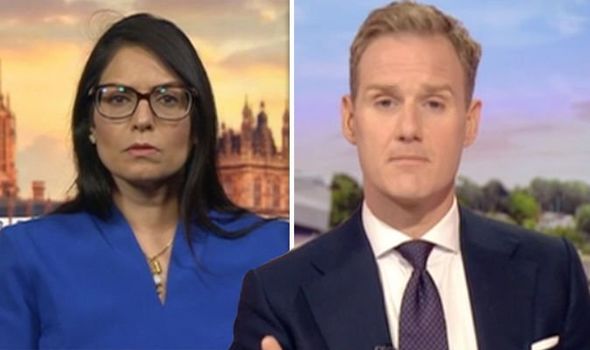 It was the Home Secretary’s response to these issues in particular which led to several fans taking to social media to voice their disdain for the chat.

“Car crash interview with the Home Secretary on @BBCBreakfast,” said one fan on Twitter. “‘Tests in Bolton aren’t available’. ‘They ARE available'”

A second weighed in: “Priti Patel giving the answers she chooses whilst ignoring the questions she has been asked … whilst never being interrupted or unchallenged on #BBCBreakfast.”

While a third added: “Priti Patel having an absolute mare on #BBCBreakfast trying to explain what’s going on with the testing. There clearly is a problem with sample (swab) collection – does anyone know what’s actually happening with lab (test) capacity?”

“At last, BBC Breakfast grown some b***s and not let Priti Patel off the hook re Covid testing or lack of,” weighed in a fourth.

A fifth jumped in defence to the Home Secretary: “@BBCBreakfast well done Priti Patel, holding your own and answering Dan on his ridiculous questioning, BBC sound like idiots.”

Whille a sixth turned off altogether: “Had to switch Priti Patel off,

“Please tell how long it took her to start blaming the public for everything #BBCBreakfast.”

END_OF_DOCUMENT_TOKEN_TO_BE_REPLACED

END_OF_DOCUMENT_TOKEN_TO_BE_REPLACED
Recent Posts
We and our partners use cookies on this site to improve our service, perform analytics, personalize advertising, measure advertising performance, and remember website preferences.Ok