It’s 1969, and the street in Northern Ireland where 10-year-old Buddy (Jude Hill) lives is bustling with kids playing soccer, neighbors running in and out of row houses, mothers chatting in doorways and calling their children in for lunch. Then a mob suddenly appears from around a corner, with masked men throwing Molotov cocktails and setting cars on fire. Everything is chaos and jittery camera movements as folks scramble. Soon, British troops are checking papers and tanks are rolling down the block. It’s ground zero for the August Riots, which would set the stage for the sectarian violence that would become synonymous with Belfast for decades. These militants want the Catholics out of this largely Protestant neighborhood. They will burn every shop and home to the ground if they have to.

The Beatles in India: 16 Things You Didn't Know

Buddy’s family is Protestant. His dad (Jamie Dornan) works in England, however, and has no issue with those of another faith — which makes the whole clan a target. It also takes him away from the family a lot, much to consternation of Buddy, his brother, and his long-suffering mom (Outlander‘s Catríona Balfe). Luckily, the lad has support from his grandparents (Ciarán Hinds and Dame Judi Dench), who, when they aren’t affectionately bickering with each other, counsel Buddy about how to woo the brainy girl he has a crush on. An older friend, Moira (Lara McDonnell), teaches him how to nick chocolate bars from the sweets shop. Star Trek is on TV, One Million Years B.C. is playing at the Saturday matinee picture show, blue-eyed Celtic soul is on every jukebox, and a man just landed on the moon. Life is beautiful, until it isn’t. Belfast is Buddy’s kingdom, his safe place, until it can’t be any longer.

Belfast, Kenneth Branagh’s semi-autobiographical tale of growing up in late-Sixties Northern Ireland, is a major change of pace for the man who was once dubbed “the next Laurence Olivier,” and easily the best thing he’s done as a writer-director in decades. (All apologies to Hercule Poirot’s mustache.) It’s a memory piece, evoking a specific time, place, and political crisis in a way that is indelibly, achingly personal. This is the territory that the writer-director is staking out: the fertile ground where nostalgia meets history, filtered through both a boy’s eyes and an older man’s memory banks. It’s a look back in anger, for sure — but it also revisits the moment when the gates of Eden closed behind him that’s brimming with the wistful pang you get from flipping through old photographs, each more faded from time than the last. 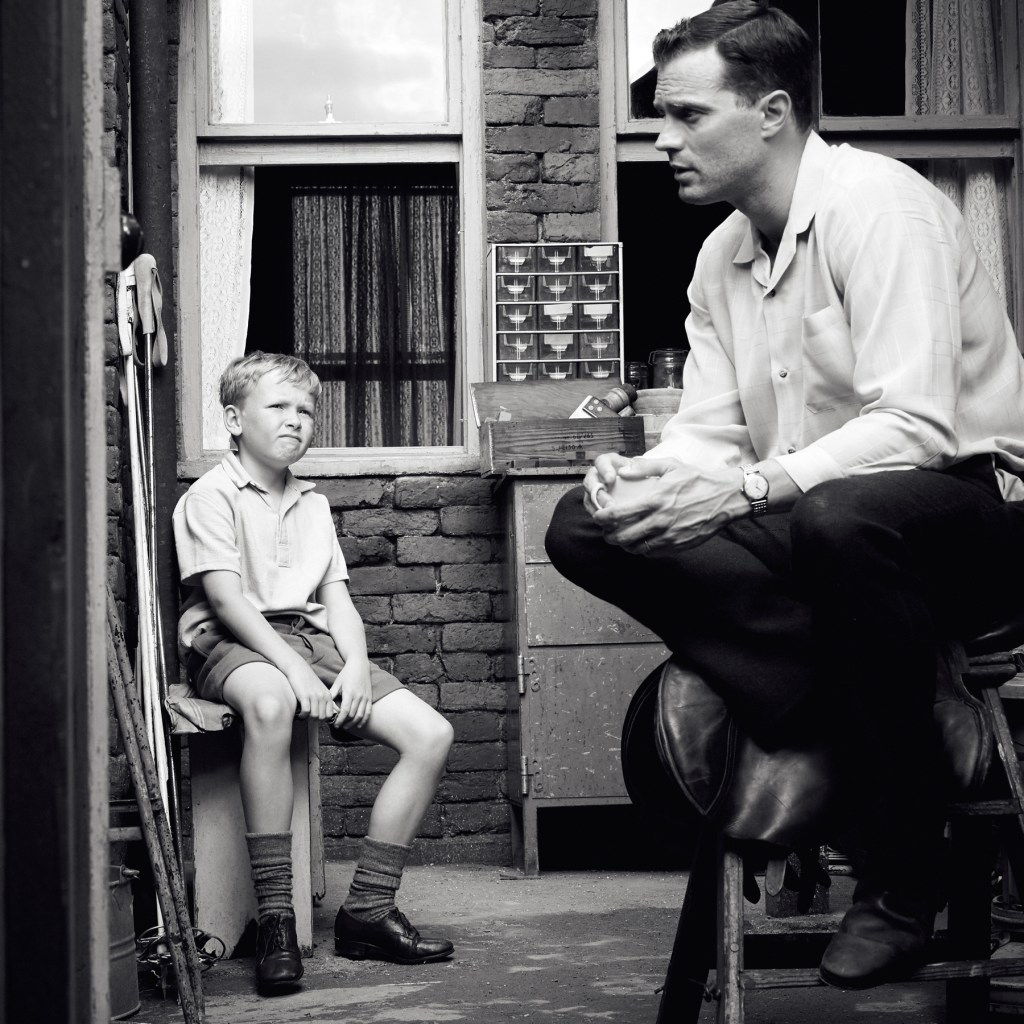 If you had to sum up Belfast in a single image, you could do worse than Dornan and Balfe dancing in the street with each other, smiles on their faces as familiar Irish R&B (new then, old now) plays, with the whole scene framed behind a loose wall of barbed wire. It’s a movie that very much has the Troubles in mind, but as part of a bigger picture that constitutes the filmmaker’s feelings about his hometown. The violence isn’t just background noise so much as one of the louder, more dissonant instruments in an orchestra he’s conducting. And it’s the motivating factor for the family having to contemplate leaving their community behind. Like Branagh, who moved to England with his parents and siblings when he was nine, Buddy will eventually have to say goodbye. But it’s part of the legacy of the Irish to leave anyway, as resiliency and relocation has become as associated with their culture as shamrocks and shillelaghs; as one character declares, “all [we] need to survive is a phone, a pint and the sheet music to ‘Danny Boy.’”

Cup your hands around your ears, and you’ll hear the faint sound of comparisons to Roma being whispered in the wind, partially because Belfast‘s particular mix of the past’s lighter and darker shades are reminiscent of Alfonso Cuarón’s 2018 masterpiece, and partially because Branagh’s film is also largely shot in black-and-white. (The rare uses of color are mostly reserved for the movies and plays Buddy attends; it’s an effective if heavy-handed homage to the life-changing magic of art.) You can’t say that this latest cine-memoir balances the same mixture of poetry and memoir as deftly as that earlier film; few movies could. But it knows how to find and hit the emotional sweet spots, from the agony of nationalist strife and the ecstasy of Buddy’s parents lip-syncing “Everlasting Love” at a wake. Even viewers who don’t feel their buttons being pushed — or rather, mashed — by the soundtrack cues (there are so, so, so many Van Morrison songs), period details and the Hinds-Dench version of these guys will find themselves drawn in by the heartstrings Branagh is plucking here. Some viewers in particular, likely of the Academy-voting persuasion. We aren’t saying Belfast has been designed to win awards — there’s way too much of Branagh’s blood on the table for that. But its mix of gravitas, sentimentality, salty wit, tragedy, and roman à clef storytelling is most definitely Academy catnip.

It’s also a movie that can’t help overplaying its hand, which means you don’t just get a kid’s-eye view of Buddy’s Da, a larger-than-life defender of the family with a superhero jawline, standing 10 stories tall — you also see him facing down the local gangsters-turned-holy-warriors while Tex Ritter’s theme song to High Noon plays over the soundtrack. (That callback to an earlier clip of the Gary Cooper Western is a far less self-conscious reference from Branagh than, say, the Norse God on the comic book Buddy is seen reading. Ahem.) There are a handful of moments when you can sense things gliding from a child’s sense of melodrama to a moviemaker’s cup runneth over.

And yet, Belfast isn’t a work that stoops to conquer. The coming-of-age uplift rests next to the dull ache of remembrance in a manner befitting of the tale Branagh is telling. We don’t know whether Buddy will grow up to attend the Royal Academy of Dramatic Art, become his generation’s premier interpreter of the Bard, and foster a career in the arts that allows him to recreate the moment his childhood innocence ended. We do know, however, that the person behind this remarkably melancholy and tender flashback has a need to tell that 10-year-old boy that everything will turn out ok in the end. And you leave the theater having felt privileged to have eavesdropped on their conversation.

A version of this review originally ran in September during our coverage of the 2021 Toronto International Film Festival.