Angels Inc were the first act to perform on tonight’s live semi-final and as the judges gave their feedback, Simon Cowell ordered the group to say why they deserve to be on the show.

The all-girl dance and magic group took to the stage with an impressive performance as a number of women magically appeared from boxes.

However, things soon turned ugly between the judges after Simon asked the girls why viewers watching at home should put them through to the final on Sunday.

Once the judges had given their feedback, Simon asked: “Why do you think the public should vote for you?”

Presenters Ant McPartlin and Declan Donnelly held up the microphone to the group but the girl group were speechless.

“Say something,” Simon implored, and an awkward silence continued to sweep the stage on the live show.

Amanda then jumped in and said: “Because they support women!”

Visibly annoyed, Simon snapped at co-judge Amanda and remarked: “I’m not asking you!”

Finding her voice, one of the Angels Inc’s members explained: “Because we represent women, we are comfortable in our bodies.”

Using the opportunity to swipe at Simon, David Walliams joked: “Get with the times Grandad!”

“I’m not the one who’s voting smart a**,” Simon swiped back before Ant added: “It’s gonna be one of those nights!” 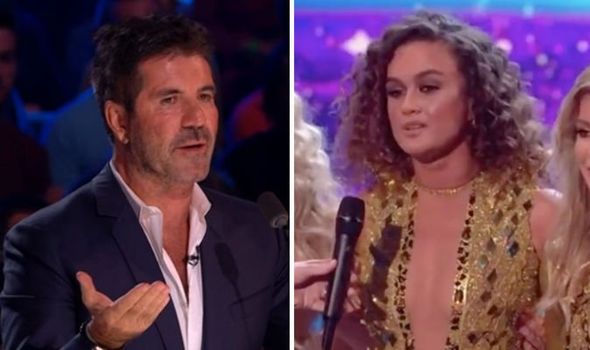