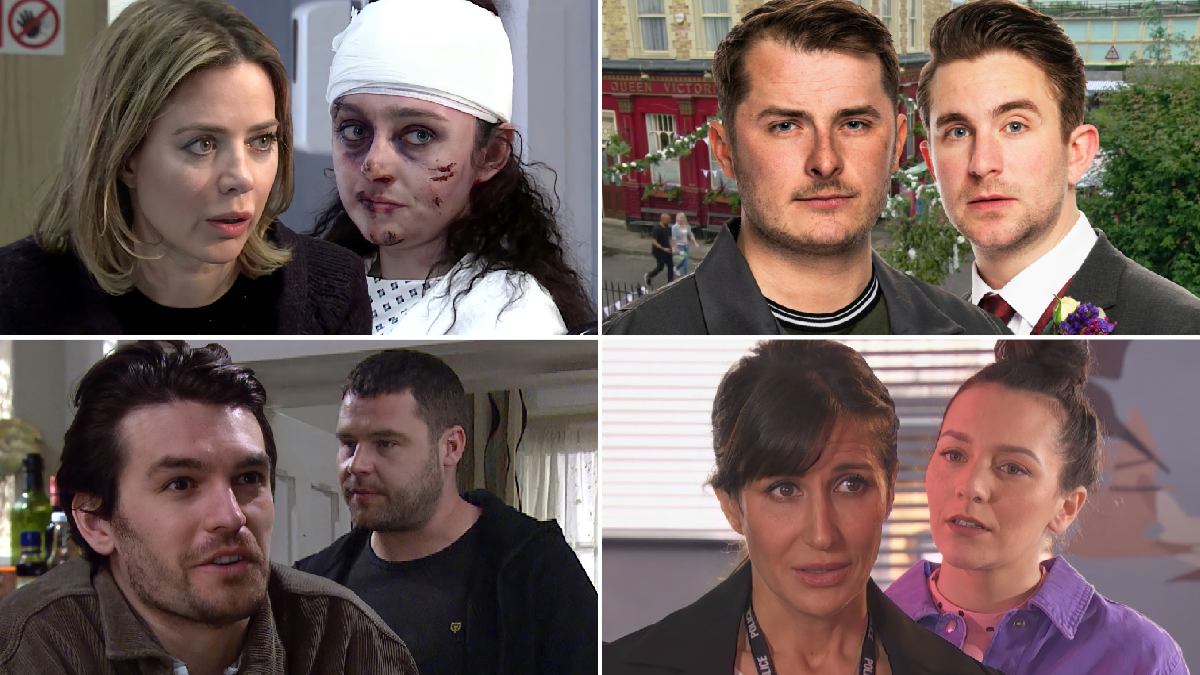 If you happen to be in the market for brand new soap spoilers – hot off the presses – then you’ve come to the right place.

Fingers are pointed and revelations are made, and by the end of the week, the police have charged someone. The question is: who is it?

Meanwhile, the soap wedding of the year arrives in EastEnders, but will Ben Mitchell (Max Bowden) and Callum Highway (Tony Clay) ultimately say ‘I Do’?

The jury is still out on that one – especially when Phil (Steve McFadden) gets wind of Callum’s undercover betrayal!

And Cleo McQueen (Nadine Mulkerrin) is determined to find out if one of her patients is being abused in Hollyoaks, but her and boyfriend Toby Faroe’s (Bobby Gordon) actions leave the police asking questions.

It’s yet another unmissable week in the land of soap, but if you fancy a little bit more to whet your appetite, then sit back, relax and enjoy, as we fill you in on all of next week’s must-see moments.

Abi is hellbent on finding out who attacked Seb, and therefore she quizzes Nina. Nina, however, struggles to remember anything – admitting that it’s all a blur – and therefore gets upset. A police officer later arrives on Abi’s doorstep, and reveals that they’ve charged someone – confirming that Nina’s appearance seemingly triggered the attack.

Kelly’s worst fears are soon realised, as the police arrive and take her away. Terrified, she refuses to answer any questions and, afterwards, she visits Corey – admitting that she thinks they should come clean. Corey, however, sends her packing! Toyah, meanwhile, tries to get Kelly to tell the police the truth, but Laura returns, and orders her daughter to keep quiet!

Nina decides to pack a bag and discharge herself from the hospital in the hopes that revisiting the scene of the attack will jog her memory. Roy, however, arrives in the nick of time and talks her out of such a thing. Evelyn, meanwhile, returns and, while in the cafe, she’s rude about Kirk’s IQ. Roy is livid, and likens her vitriol to that suffered by Nina, and thus throws her out!

Callum wakes up on the morning of the wedding with jitters – terrified that Ben won’t show up in the wake of the truth about his undercover op being exposed. Ben, meanwhile, shows no signs of getting ready, prompting Phil to question him about what happened between he and his lover. Ben refuses to open up, but Stuart inadvertently puts his foot in it and reveals all about Callum’s undercover operation to Phil – leaving him seething!

Nancy struggles to speak to Linda, who refuses to support her decision to not have children. She later opens up to Sharon, but they’re interrupted by flirty Zack, who then takes Nancy for a drink. Nancy jokes that he can help her by acquiring her a toothbrush, but charming Zack takes her suggestion a bit literally as he heads off to the Vic to pick hers up!

Rainie accompanies Bernie to her appointment at the doctors, and unfortunately it’s not all good news. The doc informs Bernie that there are a number of factors that could result in complications with a potential pregnancy. Rainie displays doubts in the wake of this information, but Bernie attempts to convince her to proceed as planned.

Having discovered that Mack stole Brenda’s brooch, Aaron pleads with him to return it, but he refuses to do so. Eric, meanwhile, is forced to explain to Brenda that he’s only got eyes for her, but she ends their relationship. Determined to make things right, Aaron steals the brooch back from Mack and sets about returning to its rightful owner, but Eric catches him in the act and clobbers him with a baseball bat!

Jimmy confides in Mandy about his struggles, and Mandy reckons he needs to put Carl first when considering his plea. Therefore, he invites Juliette around for a chat, and later reveals to Nicola that he’s intent on pleading guilty – and there’s nothing she can do to stop him. Nicola is horrified, but Jimmy refuses to discuss the matter further.

Liv is upset when Vinny reveals the therapy sessions are leading him with more and more questions, and struggling to cope under the pressure, she takes another drink of vodka. Vinny catches her drinking and realises she’s at breaking point, but will the truth about Paul’s demise come to light?

Cleo finds herself in a tough situation when she suspects that her patient Tommy is being abused by his stepdad Adrian. Toby reminds her that a hunch simply isn’t reason enough to get involved, but Cleo is on a mission. Toby, meanwhile, hatches a plan to seek revenge, and later Cleo is concerned that both she and her beau could be in trouble when DS Cohen arrives at the hospital.

Martine is preparing to receive her biopsy results – on the same day the winner of Dee Valley Business Woman of the Year is revealed. Grace tells her that she can accept help, and decides to tag along with Martine as she heads to hospital – determined to support her.

Katja returns to the village and demands a large sum of money from Fergus in exchange for her silence. Fergus calls Warren and informs him that a mystery person has evidence of the laptop heist and is demanding money. The dodgy businessman suggests that there is only one way out of this mess. Warren, desperate to ensure his future, agrees to silence the blackmailer for good.