Coronation Street fans saw Johnny Connor (Ryan Hawley) perish in heartbreaking scenes after he sacrificed himself to save the love of his life, Jenny (Sally Ann Matthews).

Jenny was left in quite the spot of bother in last night’s episode when she ended up in the deadly sinkhole after she went looking for her new man Leo in the Platts’ back garden.

He went to investigate the sinkhole which emerged but after ignoring Shona Ramsey’s (Julia Goulding) warning to stay away from the danger, she refused to listen – but this proved a costly decision for her former partner Johnny.

Amid the worsening storm on the cobbles, Johnny came to save the day – but this proved devastating as he drowned in Friday’s heartbreaking instalment.

‘Are you mad? I’m not leaving you down here,’ Johnny warned her, before they decided to make it up the ladder together.

However, Johnny started to struggle as it came clear he was losing his fight to stay alive and started to make it clear how he felt about the Rover’s Return landlady. 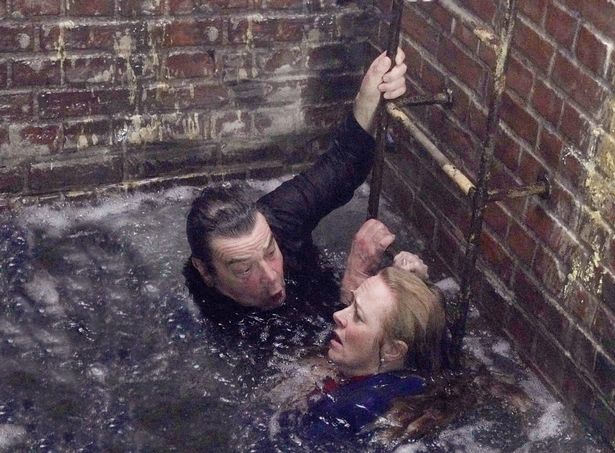 In touching scenes, he explained to her he hadn’t felt the same since the death of his son Aidan Connor (Shayne Ward).

‘It’s like my life just stopped,’ he said in emotional scenes. ‘Everything after that has been all wrong.’

Eventually Shona came to the rescue with a rope but it was too little too late as Johnny failed to make it out, with Aidan’s voice calling out ‘Dad!’ as he fell into the water.

Fans were left tearful at the emotional scenes, in which Johnny and Jenny finally reconciled with a kiss and made peace with their past.

One wrote: ‘I was crying like a baby as well! That scene towards the end with Jenny and Johnny when they kissed had me all choked up! #Corrie.’

Many were in bits after the homage to Johnny’s late son Aidan, who previously died by suicide in the ITV soap.

Tonight’s episodes also saw Natasha (Rachel Leskovac) gunned down by evil Harvey (Will Mellor) in a case of mistaken identity – but will she survive the horrific incident?