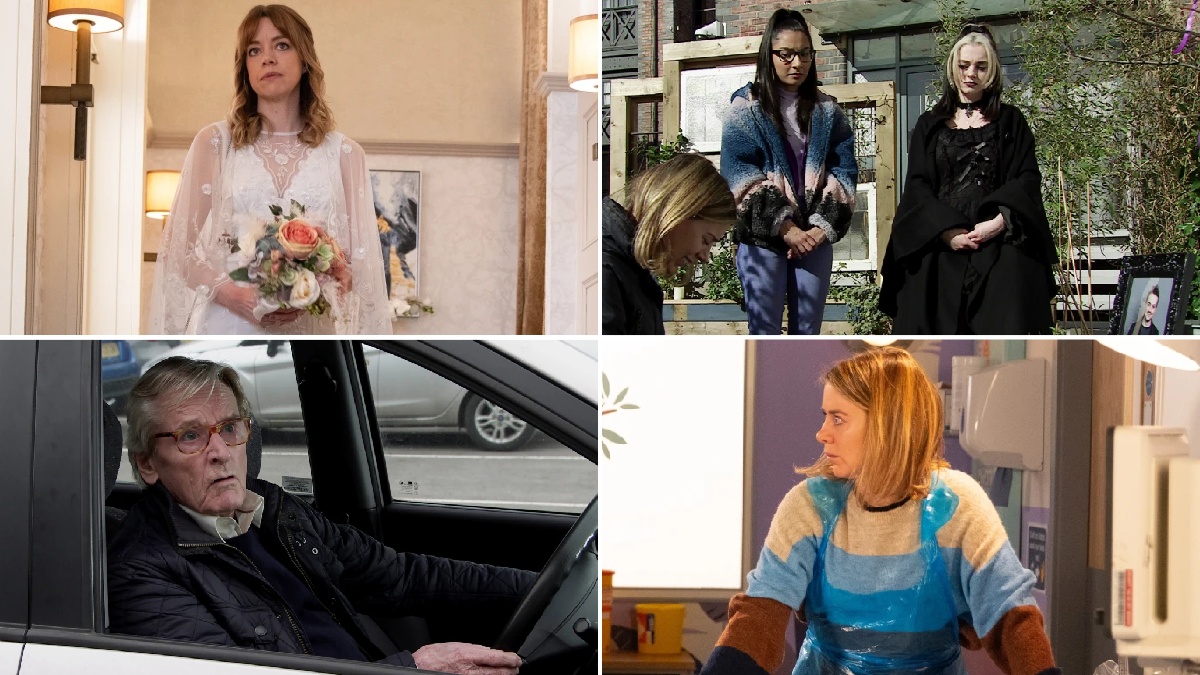 A wedding tends to be a day to remember – and that is very true for Toyah Battersby (Georgia Taylor) in Coronation Street, especially when Abi Franklin (Sally Carman) takes drastic action.

But will the bride go through with the ceremony? Or is there a shock in store for Imran Habeeb (Charlie de Melo)?

Meanwhile, in the wake of his accident, Max Turner (Paddy Bever) has some thinking to do as he makes an admission while Faye Windass (Ellie Leach) gets unwelcome news from her doctor.

After Abi realises that Imran has hired Ben to get dirt on her, she jumps into the driver’s seat of Toyah’s wedding car just as Toyah gets in. Driving off, Abi tries to persuade Toyah to cancel the wedding. Abi drops Toyah off at the hotel. As Toyah enters the venue, the wedding ceremony takes place in front of Nick, Leanne, Kelly and Adam. As the wedding party piles into the Rovers, Imran confronts Abi in the street and asserts that she’s an unfit mother.

In the medical centre, Dr Gaddas breaks the news to Faye that she’s suffering from an early menopause and will never be able to have anymore children. Faye tells Tim then returns home and tells Craig .

Stu asks Ken to give him a lift to the wholesalers. While there, an officer accuses Stu of an attempted break-in and assumes Ken to be the getaway driver. As Stu leaves the police station, the officer asserts that he’s had a lucky escape given his track record. Yasmeen tells Stu how disappointed she is and it would be best if found somewhere else to stay tonight.

In the hospital, the surgeon assures David and Shona that Max’s operation went well and he’s in a stable condition. Max admits that he was running away in a bid to avoid prison. Meanwhile at Steve’s request, Amy and Jacob join him and Tracy at No.1 for a chippy tea and a game of charades.

Peter attends his consultation with Mr Thorne. When Mr Thorne feels Aggie is trying to make him look incompetent in front of a patient, he issues her with a verbal warning.

Aggie overhears Mr Thorne gloating to a colleague how he rushed Peter’s operation in order to win the bet.

Kelly begs Imran not to take Alfie away from Abi after Abi reveals what he has been up to. Elliot confirms that he’ll be representing Abi at the custody hearing after his fees are being paid by a mystery donor.

Dean approaches hoping to score some drugs, Abi bungs him some cash to get rid of him. Ben shows Imran the pictures he took of Abi and Dean and suggests he’s willing to lie in court.

Will Imran play dirty and accept Ben’s offer to gain custody of his son? Abi visits Alfie in the neonatal unit.

Stu thanks Ken for letting him stay the night. Stu serenades Yasmeen with a song by way of an apology. Yasmeen orders him to leave, is this the end of the road for Yasmeen and Stu?

Craig reveals to Faye that Beth reckons he should dump her because she can’t have children. David visits Max and breaks the news that he’s been expelled from school.

Thorne in Aggie’s side

Abi struggles on the day of Seb’s vigil.

Aggie tells the other nurse that someone has reported Mr Thorne and later discovers that all Mr Thorne’s operations have been cancelled until further notice. Mr Thorne accosts Aggie and tells her that he plans to make her life a misery.

At the undertaker’s, Todd berates George for muddling up the clients’ ashes and points out that he has to speak to Eileen. George finally admits that he’s been staying up every night so as not to subject her to his snoring. How will Eileen react?

In the factory, Carla and Sarah are interrupted by Kirk demonstrating his new air horn. Kirk explains how the plan is to blow the horn every time they make a sale as he introduces further ‘improvements’ as Extra Office Administrator.