Corrie boss reveals biggest and most ambitious ever week 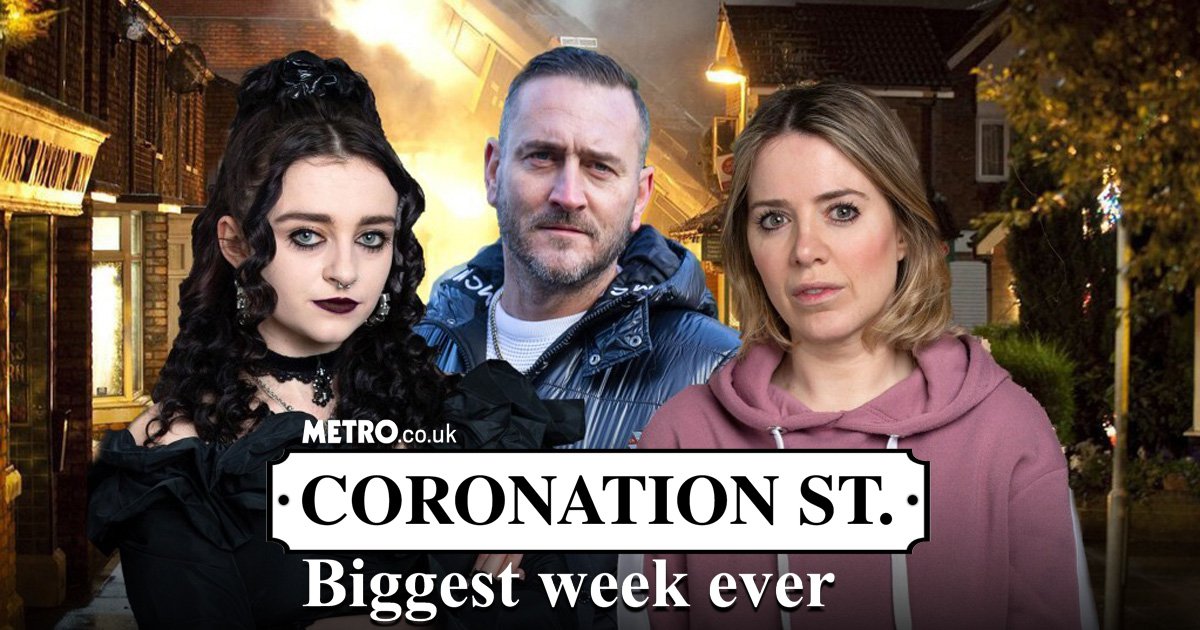 It’s a week that Coronation Street fans will never forget and show boss Iain MacLeod reckons there is no way that it can be oversold. Promising the most ambitious scenes fans have ever seen, Iain has revealed that he couldn’t quite believe that the team pulled it off – and declared that it proves that Corrie is back and able to provide cinematic spectacle after 18 months of Covid restrictions.

The week will involve a sinkhole collapse, a car crash and explosion, a gun showdown and a tragic death, all with the backdrop of an apocalyptic storm.

He told Metro.co.uk: ‘What you can expect is truly massive. We talked about doing something in the autumn, where money is no object, we just go nuts, and show Coronation Street is back. I wrote down my outline and I thought there’s no way we can do it, it’s too ambitious.

‘When the crew said yep, I picked my jaw off the floor; we created something visual, dramatic, heartfelt and full of twists which I hope that will have some moments you will never see coming. It’s got spectacular stuff and the end result is anything more ambitious than we have ever done before. It exceeds everything we have done due to the technical elements

‘It took in excess of a month to film, it’s very technically challenging and wasn’t without hiccups. Our cast and crew worked incredibly hard and a lot of them got very wet by design. It was challenging for everyone involved – it has been worth all the blood sweat and tears. It’s heartstopping!’

Many fans have wondered if this is what could have been what was initially planned for the 60th anniversary and Iain shared his frustration he has felt since – but he refused to ever give up on the intricate plans.

He explained: ‘When we first collapsed the Platts’ garden with a sinkhole it was with half an eye of doing something in the 60th but the Covid restrictions meant we couldn’t do what we wanted. Production keep saying, “shall we fill this hole in?” NO! We have a plan for that! I was adamant!

‘We have finally got a stage due to the professional graft of our crew that we are finally able to do what we had in mind. It was always the plan and a frustrating wait. Every time the sinkhole is referenced I thought, “oh I just want to get on with it!”

The Platt sinkhole happened during the Roy Crosby story – so maybe more than a year ago now? Since then, I have been desperately waiting for the moment. The specifics for the week, it arose in March and April when the network asked for this big week to really showcase the show. We plan things six months in advance – if you’re like me, you hate delayed gratification so it’s been a long old wait!’

But the main aim that ITV and the cast and crew wanted to achieve when this big week was pitched was both a treat to fans who had stuck with to show and also revealed that the incentive was to prove that Corrie is very much still capable of pulling out all the stops.

He insisted: ‘Yes, none of us in Coronation Street take our viewers for granted. I like to think we have given them an incredible range of drama over 12 months but we haven’t had the spectacle over 18 months. It’s a cinematic treat we like to give every now and again and Covid stopped that. It was an opportunity to go, don’t worry, we haven’t forgotten how to do the big stuff.

‘We have done the emotional and heartfelt drama stories so well but it’s great to stretch our muscles again and prove that we still can do the high octane. The moment the situation allowed it, we dusted off this playbook for something spectacular

‘Covid restrictions certainly made things trickier and it wasn’t a return to post Covid normality at all. We had 70+ close contact cohorts – they are subjected to an additional testing regime but there was so much bubbling in this week, far in excess than we have done before.

‘There is just stuff you can’t do two metres apart and we are all familiar with how to do the restrictions so we thought we could go all out but everything was still a big task. I can’t praise everyone enough – making TV in a pandemic, and this level of ambition is unfathomable to me, design and execution wise. I just need to come up with the idea – I’ve no idea how they do it.

‘We essentially built a subterranean universe and built an elaborate complex of tunnels and storm drains. There’s water involved. They say don’t work with children and animals but we should add water – that’s always a challenge. It has to rise and fall and it needed to be fast flowing at times to be high jeopardy.

‘I gave the design team a nearly impossible shopping list and they went and did it. We needed a huge water tank and there were tricks to adjust the depths. We needed to connect the surface world with this subterranean world so sets were 20-30m high so we could drop actors between the worlds for real.

‘People from other productions who have worked on higher budgets – their design teams were open mouthed at what our design team had managed to achieve. When I went in to see the sets for the first time, it felt like being on a movie set. All that effort has created something incredibly cinematic!’