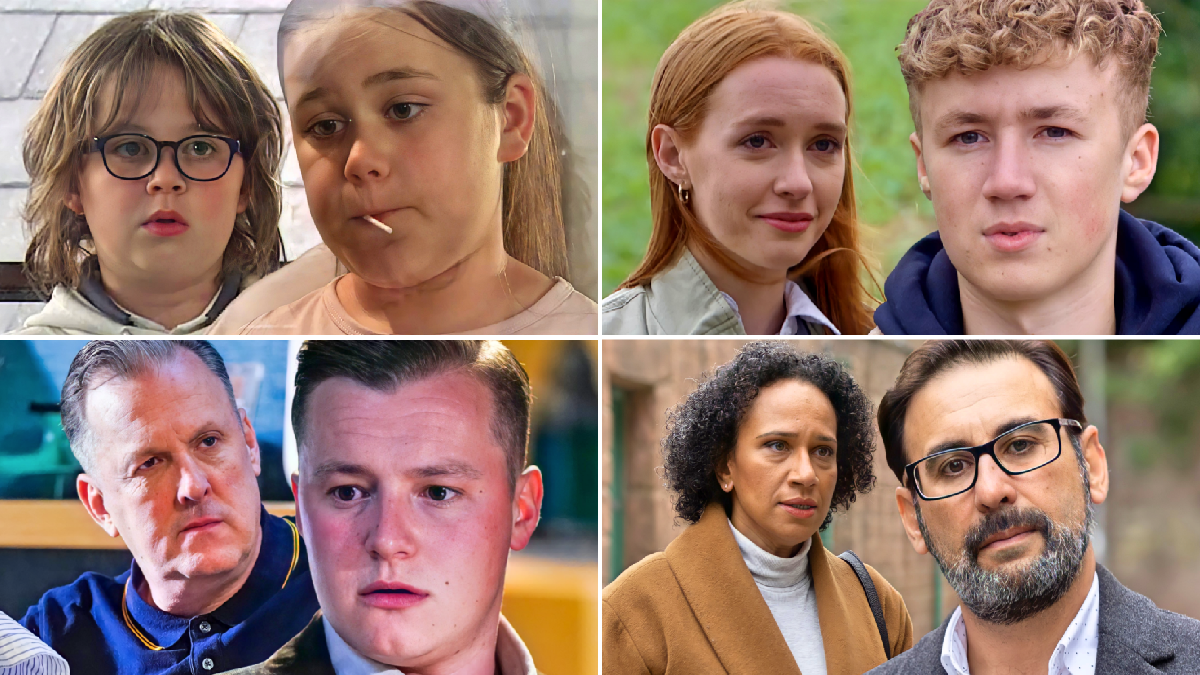 Vanishing teens, dark threats and surprise discoveries are at the centre of what promises to be a very interesting week in the soaps.

Kelly Neelan’s whereabouts becomes the subject of much mystery in Coronation Street, and she’s not the only one to do a disappearing act, as Emmerdale’s Chloe Harris and Noah Dingle decide to run away together!

Harvey Monroe starts to grow concerned about son Aaron in EastEnders, while Whitney Dean makes a discovery about Gray Atkins.

Hollyoaks sees a number of interesting developments, as Shaq Qureshi publicly calls out rapist Ali Shahzad, while Pearl Anderson gets under Martine Deveraux’s feet while carrying out a secret mission.

If you’d like a lot more information on what’s coming up in your favourite serial dramas, then you’ve come to the right place, as we’ve picked out the biggest, most unmissable moments to look forward to.

Don’t say we never treat you!

Kelly beds down in a shop doorway for the night, and when her phone battery dies, she plugs it in in a hotel foyer. The receptionist, however, questions her, but a guest named Alan comes to her rescue. Alan tells her she can stay at his anytime. Kelly hurries out, but when all of her belongings at the shop doorway are stolen, she knocks on Alan’s bedroom door.

Aadi later assures Kelly she can stay at his. However, Kelly overhears Asha reiterating that she’s not welcome on the street, and thus she tells Aadi there’s been a change of plan, claiming she’s staying at her mum’s. Aadi, however, is suspicious.

Sam’s face lights up at the sight of his telescope, but he’s not too happy when Max and Lily join him. Lily locks Sam out on the balcony of the flat, and dangles the key in front of him. As she taunts Sam, however, her lollipop comes away from the stick, and she starts to choke. Sam watches, frozen in horror. Will Sam overcome his silence and save Lily?

Tim is worried about Faye after paying her a visit in prison, and Sally confides in Debbie, suggesting a visit to see Ray to see if they can get him to confess to sexual assault. Debbie does just that, visiting Ray behind bars, and tells him she’s going to report him to the police for the death of Johnny Connor if he fails to plead guilty to sexually assaulting Faye.

Chloe suggests that she and Noah take their relationship to the next level. Mack offers Noah some advice, keen to get him on-side. But when Charity reveals she doesn’t want Chloe anywhere near her kids, he realises the error of his ways!

With too many prying eyes, Noah and Chloe run away, forcing Kerry to swoop into action to track them down. However, she’s soon confronted by two thugs who threaten to harm Amy if she fails to find Chloe! Kerry updates Charity, who successfully finds the missing lovers. Charity is adamant that the pair simply cannot be together, while Kerry privately has concerns about returning Chloe to her life of relative captivity.

Meena is shocked to learn David and Victoria have gone to Portugal. Livid, she sneaks into Victoria and Amy’s home and proceeds to smash it up! Amy is shocked when she discovers the damage, and soon she calls the police. PC Swirling goes to interview Meena, she denies everything and isn’t arrested.  Amy vows she’s going to prove it was her and it is about to get physical, when Billy intervenes. Meena brands Billy her ‘knight in shining armour.’

Al unveils a new staff uniform for the Woolpack team, and makes a flirtatious comment towards Chas, who tells him he’s overstepped the mark. He’s apologetic, but when Paddy is called away on a course, he invites Chas
to a business dinner. It appears as if his approach is starting to work on Chas!

Stacey asks Kheerat to speak to Suki, but she’s interrupted by a phone call and panics. She finds Eve drunk at the café, having a go at Suki as Eve reveals that she’s meeting her probation officer. Stacey takes Eve home, desperate to sober her up. When the probation officer arrives, Jean covers for her. Suki and Kheerat appear as the probation officer is leaving. Kheerat’s angry that Eve had a go at his mother and Suki tells the Slaters they have to leave by the end of the week.

Aaron is annoyed to see that Bobby has come to Harvey’s for lunch. Things become tense when Aaron starts to question Bobby about his religion. Bobby, however, is prepared and responds well. Aaron insists on taking the bins out, piquing Harvey’s interest, and he finds Aaron’s bloodied shirt amid the rubbish! Harvey demands answers. Aaron tells his dad it was just a fight, but he lied to the police to say he was with him the night before. Harvey’s conflicted as Aaron ask him to be his alibi.

Whitney calls Gray’s work, but is she’s shocked when she’s told he doesn’t work there anymore. Gray, meanwhile, is working at the burger bar when he gets a call from Whitney. He lies about his whereabouts but she can tell where he is. Whitney intercepts Mia and Chelsea as they arrive home shopping. She’s torn over whether to tell Chelsea the truth about Gray.

Pearl makes up a lie about being homeless, and DeMarcus quickly offers her a bed at the Deveraux household, but it doesn’t take long before she gets under Martine’s feet. Felix surprises Martine, providing her with the perfect distraction – wedding planning. However, Pearl overhears Martine’s complaints and confides in Scott, as she admits she promised Walter to look after his family.

Misbah is shocked to discover that the hospital is honouring Ali with an award for his contributions to oncology. Later, a riled-up Shaq publicly condemns Ali while he’s receiving his award. Ali demands a public apology, threatening to report Shaq to the police for assault if he doesn’t comply. Misbah plans to leave the village, but before she does, Sami receives an email from another victim. Afterwards, Misbah makes a formal complaint to the police.

DeMarcus doesn’t think Felix has any time for him. He opens up to Nate and tells him there’s more than meets the eye to Felix.

EIf you’ve got a soap or TV story, video or pictures get in touch by emailing us [email protected] – we’d love to hear from you.