Dan Walker, 43, and his BBC Breakfast co-host Louise Minchin, 51, were joined on the show by Michael Gove, 52, via a video link from his home. The presenters spoke with the politician about Prime Minister Boris Johnson’s, 55, condition after the news broke late last night he had been moved to an intensive care unit after testing positive for coronavirus 12 days ago. However, the host has since taken to Twitter to apologise for not asking the Cabinet Office Minister about his own health given it has now been revealed he is self-isolating.

Since the social distancing measures were implemented over three weeks ago, many politicians have been carrying out their duties and speaking on television from their homes.

This is exactly what Gove did this morning, so there was no reason for the presenters to think he might be self-isolating as a result of him or someone in his household exhibiting symptoms.

Shortly after his appearances on both BBC and ITV networks, the news broke the Cabinet Office Minister was taking precautionary measures in line with Government advice after a member of his household began suffering symptoms similar to coronavirus.

Taking to Twitter in light of the revelation, Walker issued an apology as it didn’t cross his mind the guest could be self-isolating. 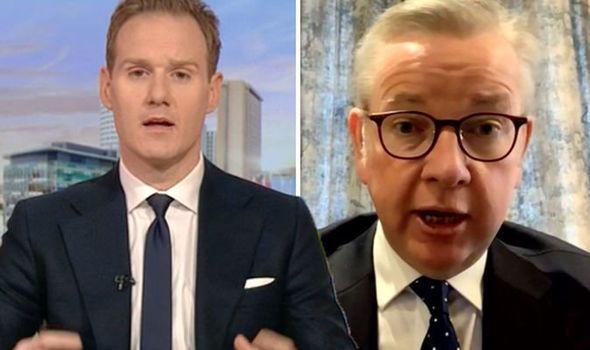 In view of his 632,100 followers, the host retweeted a video posted by BBC Breakfast from Gove’s interview this morning.

The presenter then wrote: “I’m annoyed. I spoke to @michaelgove this morning and didn’t ask him how he was.

“Turns out, he’s self-isolating because a family member has shown symptoms of #coronavirus. Apologies for not asking the most basic question Mr Gove.

“I hope you – and they – are ok,” he concluded, with the Cabinet Officer Minister also adding a response to his news on the social media platform.

Apologies for not asking Mr Gove

An hour before Walker made his apology, Gove thanked those who had sent good wishes to him following his news.

In view of his 165,400 followers, he added: “In accordance with the guidance, I am isolating at home after a member of my family started to display mild symptoms of coronavirus on Sunday.”

Gove added he was not showing symptoms himself and affirmed he would continue to carry out his duties for the Cabinet.

END_OF_DOCUMENT_TOKEN_TO_BE_REPLACED

END_OF_DOCUMENT_TOKEN_TO_BE_REPLACED
Recent Posts
We and our partners use cookies on this site to improve our service, perform analytics, personalize advertising, measure advertising performance, and remember website preferences.Ok