EXCLUSIVE: Dennis the Menace is getting another shot at the small screen after Beano Studios started developing a YA adaptation of the classic British comic book character.

Deadline understands that the British company is pitching a live-action series based on the DC Thomson-owned IP with Matthew Barry, a writer on Netflix’s Greg Berlanti-produced Chilling Adventures of Sabrina, having written the script.

We hear that the company is in talks in the U.S. and UK and has held discussions with a series of U.S. studio partners to come on board the project.

The tone of the pilot script is understood to be much darker than the original with Dennis believed to be a teenager, around the age of 16, and flitting in and out of trouble with the police. Once source told Deadline that the remake has a tone that is similar to British drama Skins.

Dennis the Menace has been adapted a number of times on both sides of the Atlantic. In the UK, there have been a number of animated versions, while in the U.S., CBS aired a live-action series starting in 1959 for four season and Walter Matthau starred in a live-action feature film, co-produced by John Hughes, in 1993.

The move comes Beano Studios looks to take advantage of the boom in classic IP for broadcasters and streaming platforms.

The company is looking across its archive of 2,000 characters and comic books. The Beano itself, which was first published in 1938, includes characters such as Dennis The Menace, Minnie The Mix, The Bash Street Kids, Roger The Dodger, The Numskulls and Billy Whizz.

It is also responsible for IP from DC Thomson’s other brands including female-skewing comic company Bunty, military comic Commando and sci-fi comic Starblazer.

While he wouldn’t comment on the Dennis The Menace project, he did tell Deadline that he was looking to reimagine many of its comics, some of which are nearly 100 years old, to be relevant for a modern audience.

He said that there’s a couple of different avenues open to them including YA adaptations that are inspired by shows such as Chilling Adventures of Sabrina, Riverdale and Sex Education, and then slightly older-focused comedies and dramas.

Talbot is working with a number of writers on these adaptations including Veep writer Ian Martin, Vice Principals and Divorce writer Stephanie Laing, Juno Dawson, an author and screenwriter whose book The Gender Games was optioned by Benedict Cumberbatch’s production company SunnyMarch and Tobi King Bakare, an actor and writer who appeared in HBO and BBC drama I May Destroy You.

“Some writers come to the IP and remember it from their childhood and others come to us and say they’ve never heard of Nick Jolly The Flying Highwayman but they’ll take a look,” he told Deadline. 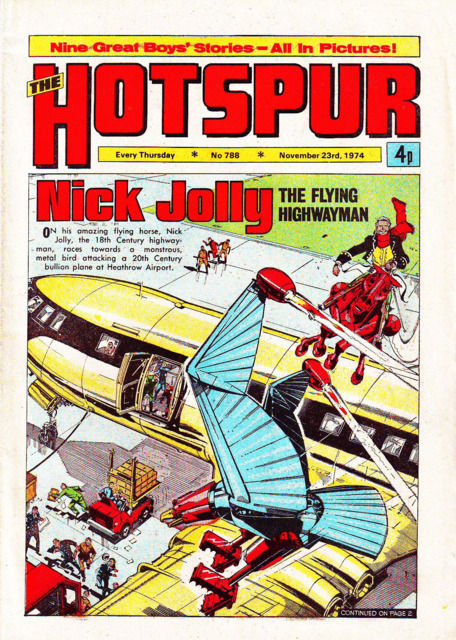 Nick Jolly The Flying Highwayman (left) was an 18th Century Robin Hood-esque character, a decent guy but a criminal, who robbed from the rich to help the poor, before he was transported to 1973, where he became a crimefighter. Other characters of interest include Marina, a young girl who could see into the future, based on a comic from Spellbound.

“When you look at Marvel, think about how many incarnations there have been of Batman from the 1960s with Adam West all the way through to Batman Lego and at the same time me and my wife can sit down and watch Christina Bale and Tom Hardy going at it for two years. It’s the same IP but it can serve two different audiences and that’s the same beauty with the Beano,” he added.

Talbot said that the UK market is interested but that there’s also brand awareness in the U.S. and in countries around the world including in China, South Africa and Australia.

“When we pitch the shows in the UK, there’s definitely a sense of nostalgia and everyone gets that – we did some research and there’s 95% brand recognition in the UK up there with James Bond and the Queen – so the British broadcasters get it. But what’s been interesting with the Americans, they don’t have the Beano but what they see is the archive with over 2,000 characters and storylines sat in a warehouse in Dundee waiting to be reimagined by new writers and established writers and I think that’s what the American market is excited about,” he said.

END_OF_DOCUMENT_TOKEN_TO_BE_REPLACED

END_OF_DOCUMENT_TOKEN_TO_BE_REPLACED
Recent Posts
We and our partners use cookies on this site to improve our service, perform analytics, personalize advertising, measure advertising performance, and remember website preferences.Ok