Home » TV & Movies » Ed Sheeran says popstar pals 'want me to fail' and Stormzy, Dave and Elton John are his ONLY musician friends

Ed Sheeran says popstar pals 'want me to fail' and Stormzy, Dave and Elton John are his ONLY musician friends

ED SHEERAN is known for being well in with music’s big names, but today he reveals only three A-list pals bothered to congratulate him on his new album Equals hitting No1.

The Shape Of You singer appeared to take aim at his pop “mates”, claiming many of them “actively want me to fail”, and said Stormzy, Dave and Sir Elton John were the only musicians to salute his new chart-topping success. 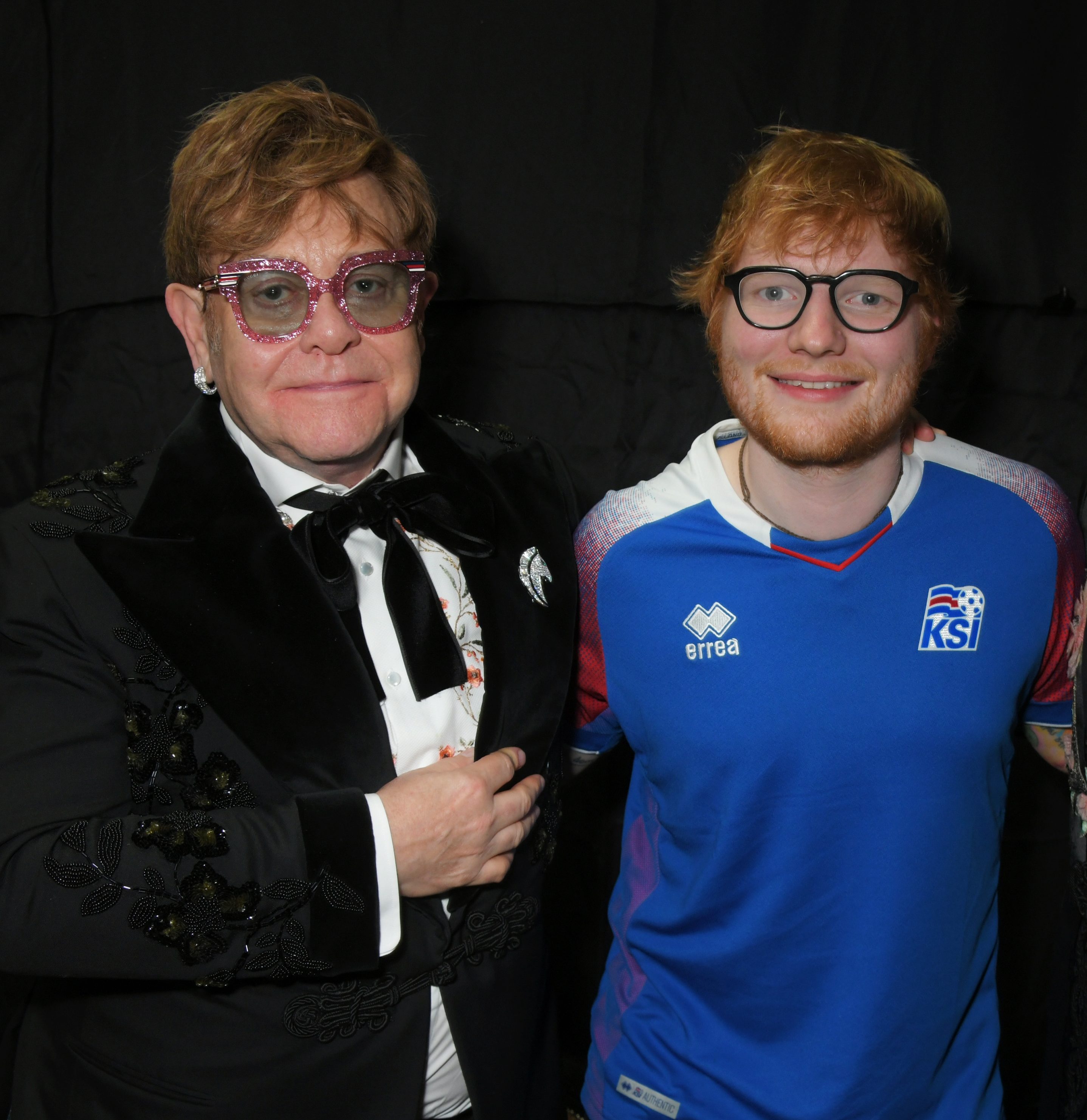 Ed said: “In terms of people that actually root for me and want me to win . . . I know so many artists who, whenever I win, scoff, and actually actively want me to fail.

"But they would never tell me, I just know. I hang around with people and I hear things.” Yet on the love he feels from UK black musicians, he continued: “I feel accepted. It’s the only music community that roots for me.

“I feel like my own section, that I’m meant to be part of, don’t like me and don’t rate my music.

“It’s quite telling that Dave and Stormzy are both emailing me saying they like my album but none of my pop peers are.”

Ed told me last month how Elton called him every day, and he said grime MC Stormzy, who he collaborated with on the No1 singles Own It and Take Me Back To London, feels like a “brother”.

Ed gushed: “Stormzy is the most good-hearted successful person I know that genuinely is overjoyed for my success.

“It’s him, the producer Fraser T Smith, Dave and Elton John who all sent emails this week, in depth, about the album, what they liked about the songs. Dave rang me.

“I can’t take that for granted, because I don’t have many friends who are famous musicians. I have lots of acquaintances and lots of people who I hang out with, but I would class Stormzy as a brother.”

While you might not think a superstar with the fastest-selling album in four years would need praise from his mates, Ed said the digs from the music press mean he is all the more grateful for it.

He added about the album on the Halfcast podcast: “It gets savaged in the press because everyone has already made up their mind. Music critics f***ing hate me.

“When my albums come out it is basically the Olympics of insults that they can throw. Like who can do the best put-down.”

I love it, Ed, even if a load of snobby journos pretend not to. 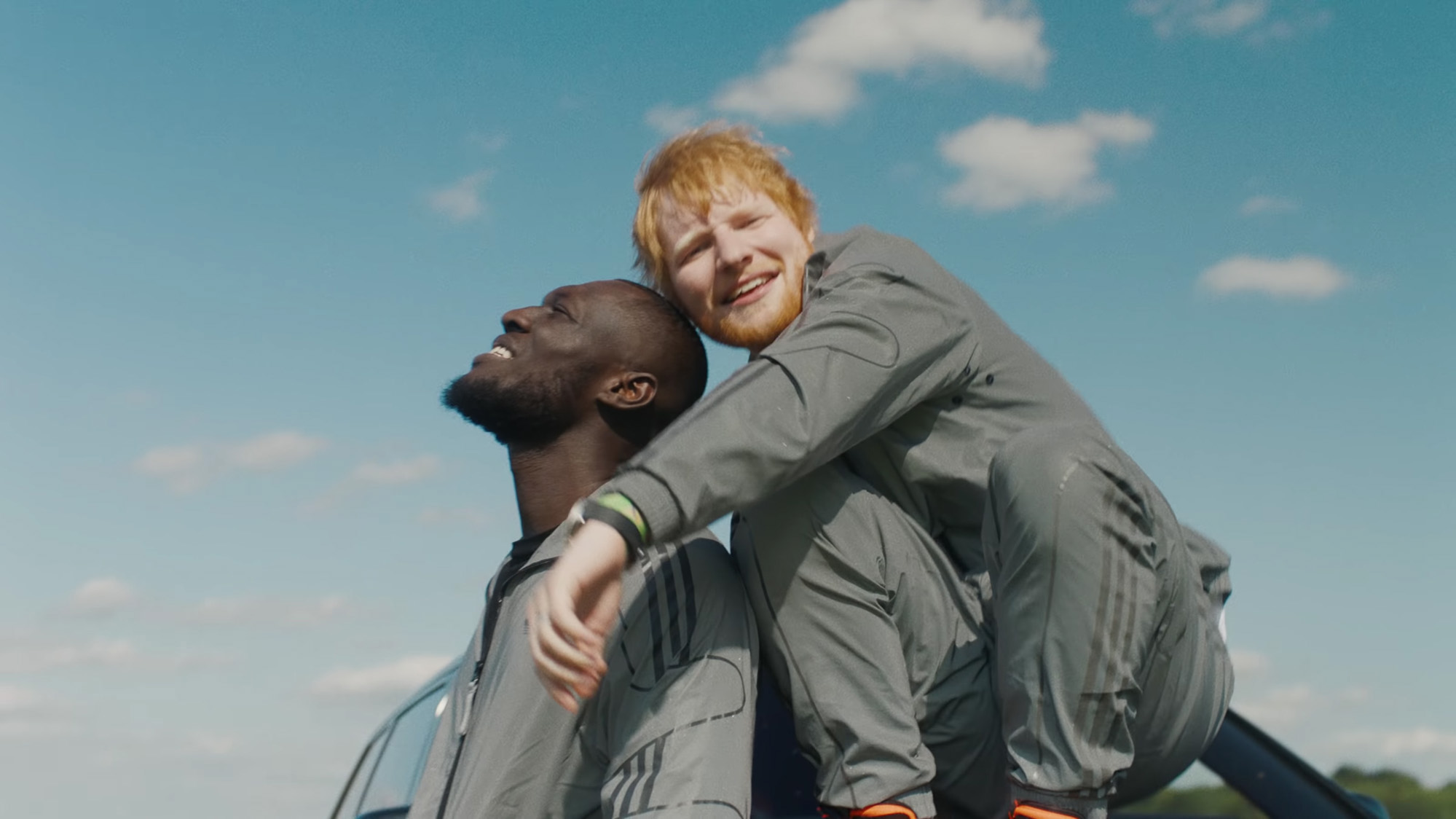 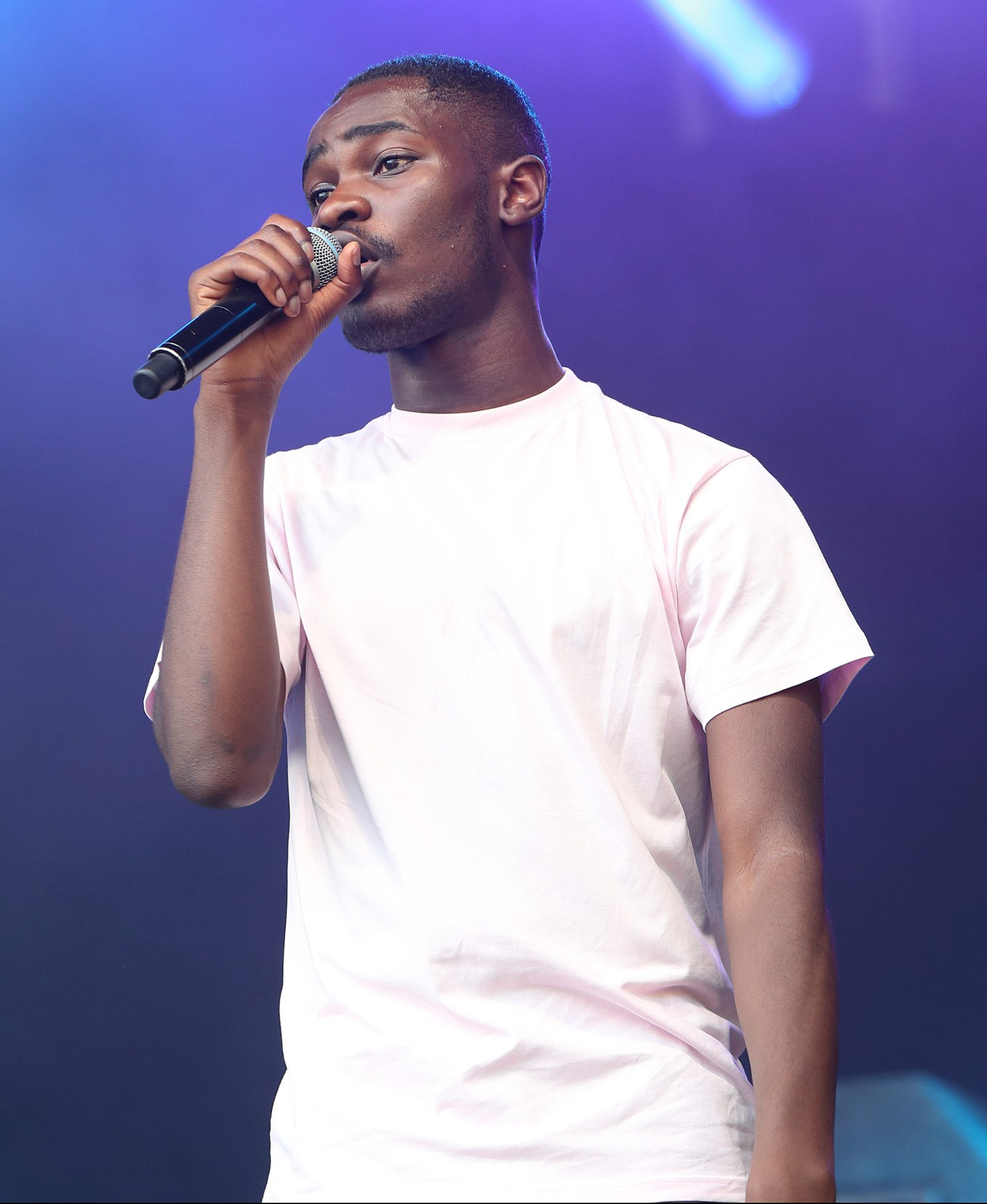 KYLIE Minogue has confessed she still feels impostor syndrome as a singer, having kicked off her career four decades ago as an actress.

The Spinning Around star, Australia’s highest-selling female artist ever, said she found it hard to switch from being in soap Neighbours to launching a pop career in the Eighties because there was snobbery about people doing both. 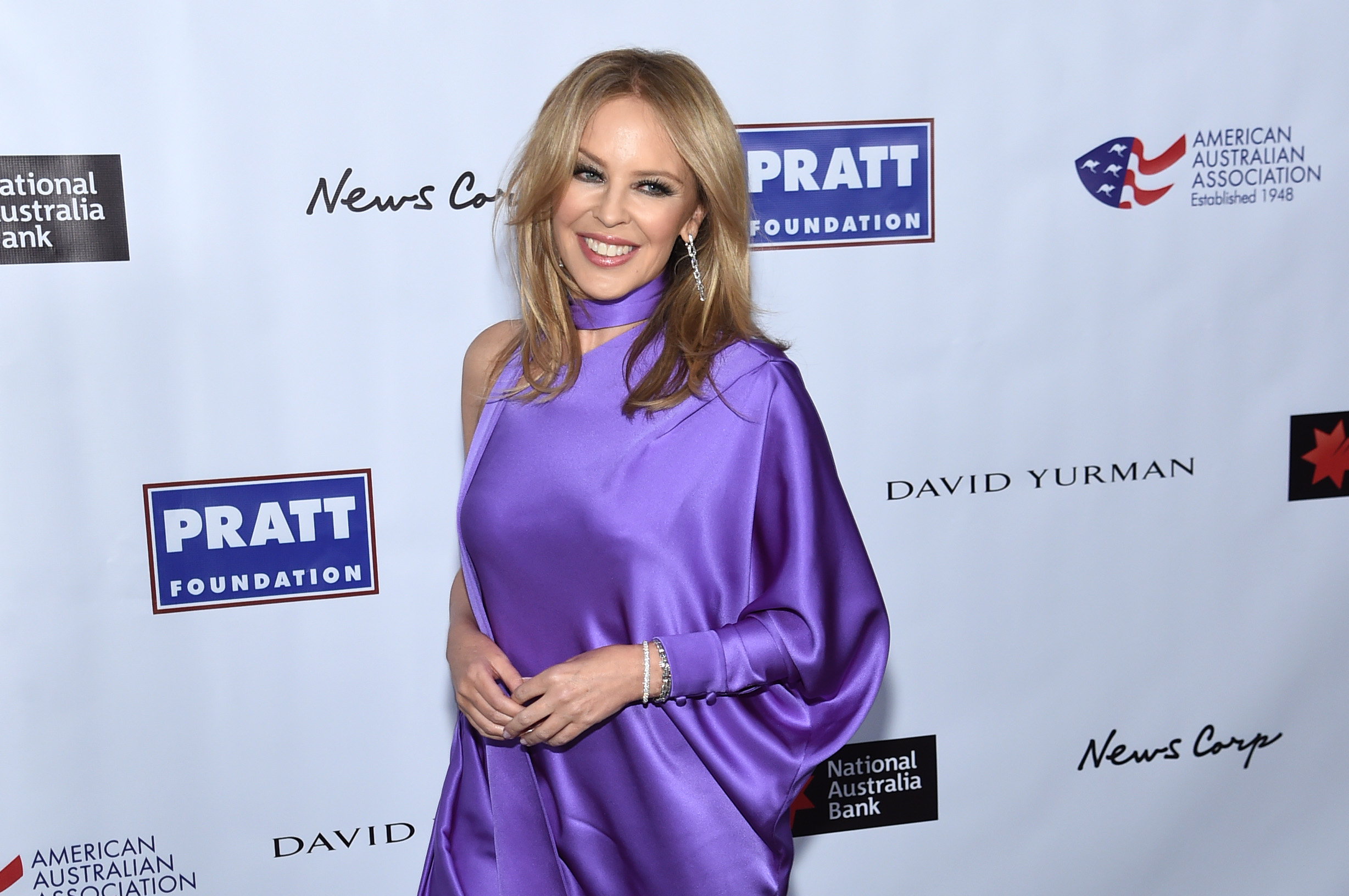 She said on TV’s Later With Jools Holland: “It used to drive me crazy and I can still hear the voices in my head, it’s terrible.

“It would never make any sense to me, so I really had to forge my path through and find my way and try to not listen to that.

“I had to really believe in myself that you can do more than one thing.”

HE has worked with some of the biggest names in music, including David Bowie, Mick Jagger and Madonna.

And now Nile Rodgers says he has Noel Gallagher in his sights for a collaboration. 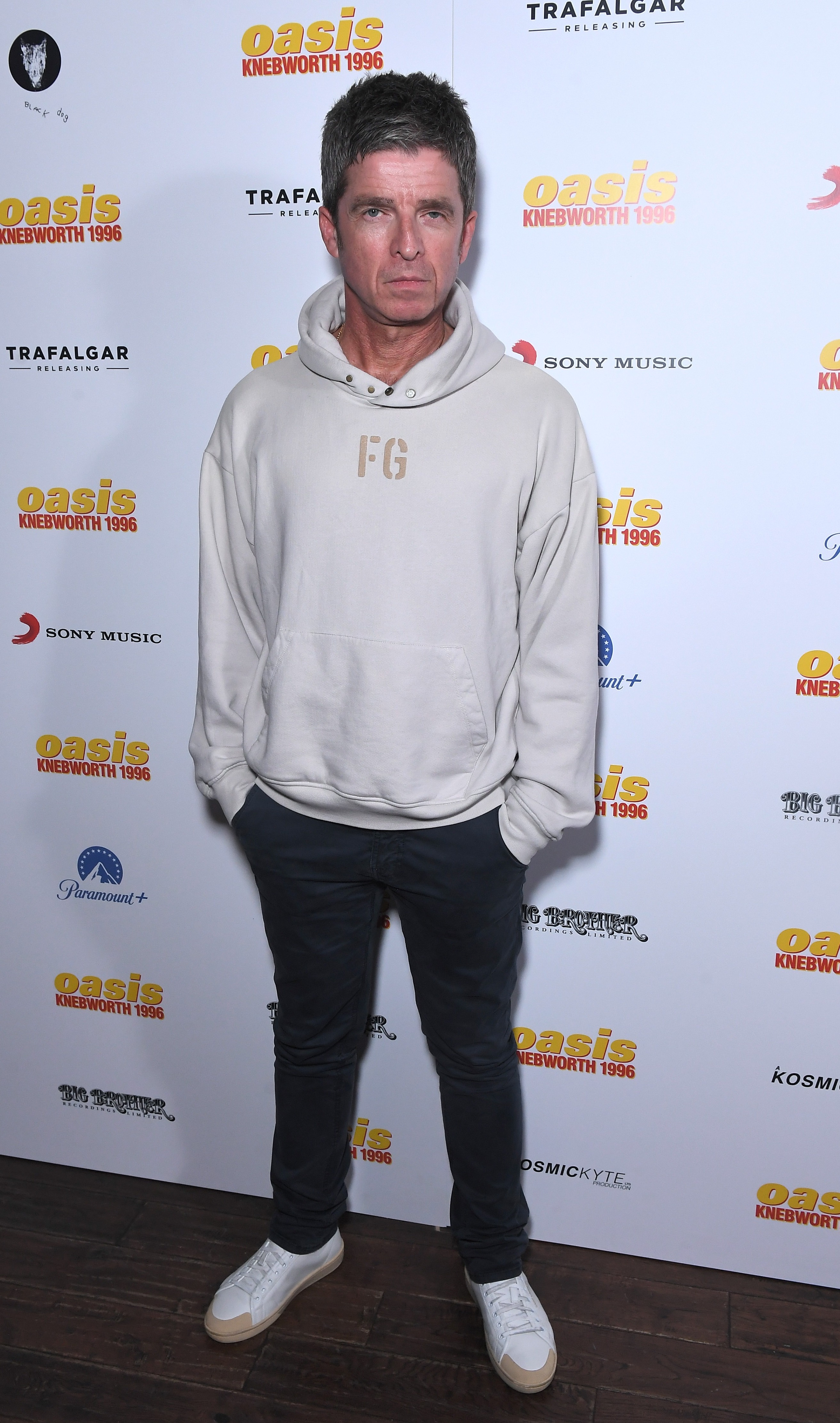 They met at London’s Abbey Road studios when the former Oasis rocker was recording his 2019 track Black Star Dancing.

In an exclusive chat at the Music Industry Trust Awards in London, Nile said: “If he wants to talk about making music, I’m down.

“Noel was just with us at a listening party with The Zutons.

“The reason why he was there was that he let us borrow a couple of his guitars to make the record and it was perfect because we needed them and we didn’t have them.

The feeling is mutual, as Noel previously said of the Chic legend: “Nile is unbelievable. He is a dude.”

Get your heads together, lads. There could be some magic in this.

Going to Meg her day

MEGAN THEE STALLION oozed class as she picked up the Glamour Women Of The Year award.

The Savage singer wore this floor-length, long-sleeved black gown with a cut out section in the middle, a positively demure outfit by her standards, left. 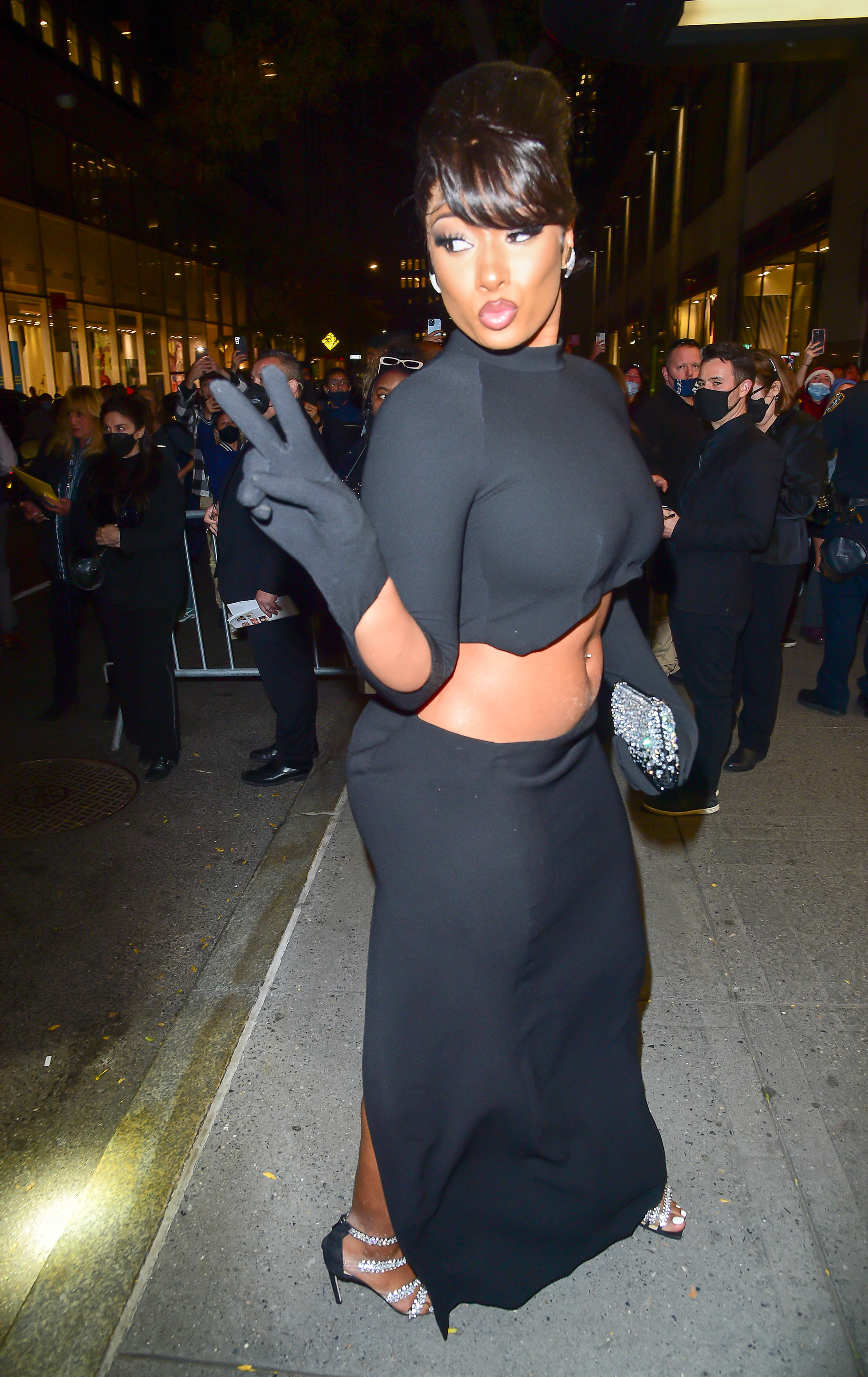 Megan kept her hair up and posed for pictures ahead of collecting her gong at the Rainbow Room in New York.

During an emotional speech, the singer talked about the reason for her style change and said she was picking up the award as herself, Megan Pete, rather than her musical alter-ego.

She said: “I win a lot of awards as Megan Thee Stallion, but tonight I choose to accept this award as Megan Pete, a soon-to-be college graduate from Houston.

“A woman who has built a successful career in a male-dominated industry and musical genre, who has earned her respect from people that couldn’t look beyond my public persona.

“I want to dedicate this award to every woman out there who’s been told she’s not enough of one thing and too much of another.

Phoebe is a suiting star

The actress oversaw proceedings at a party thrown by Harper’s Bazaar mag and American Express at Bafta House in central London. 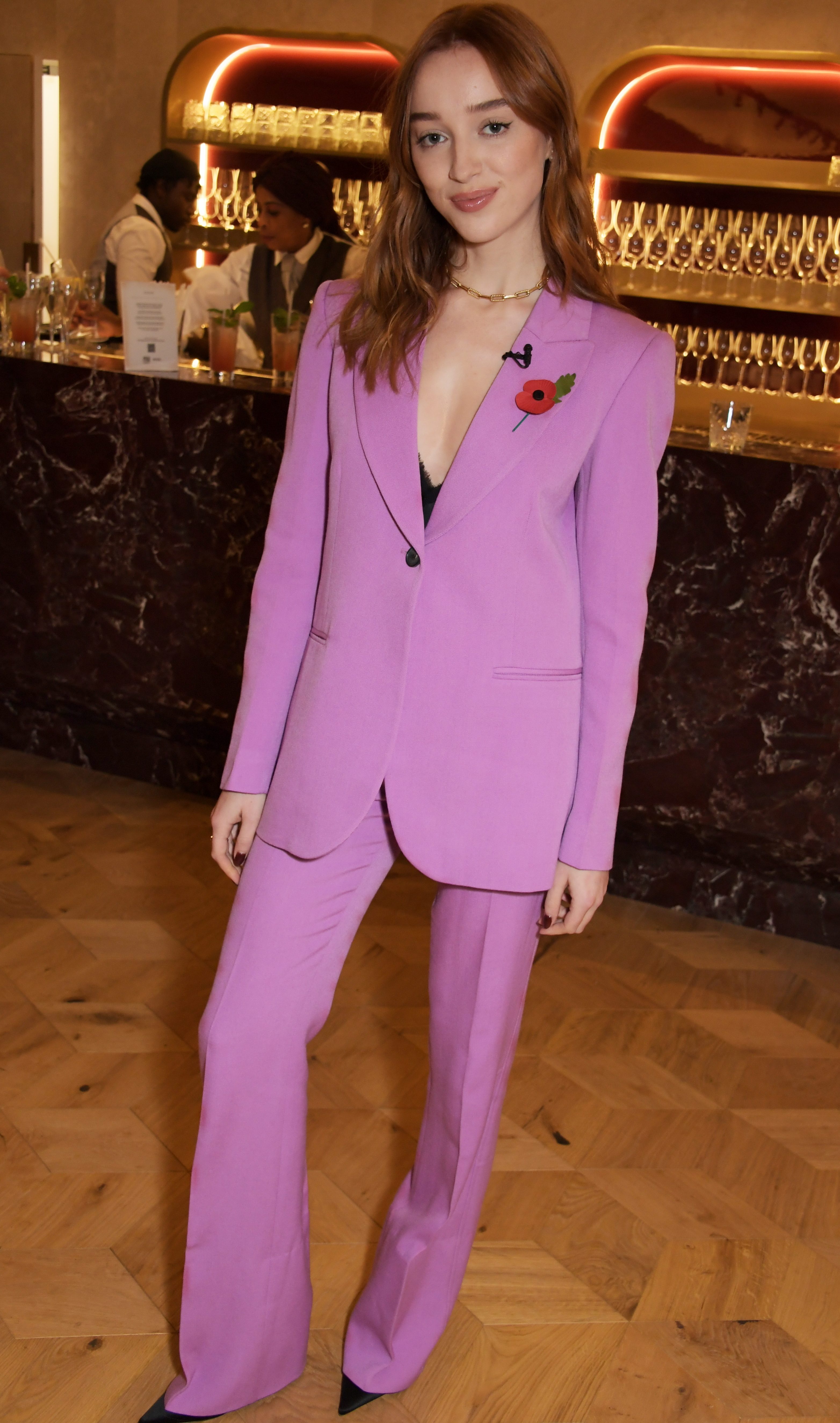 Phoebe wore this pink suit from Victoria Beckham's latest collection and rubbed shoulders with a host of stars, including model Daisy Lowe.

With the second series of Netflix hit Bridgerton coming next year, I’m sure fans were lining up to quiz her on the plot.

And now that her ex-boyfriend, US comic Pete Davidson, has moved on with Kim Kardashian, I imagine the blokes were trying to catch her eye, too.

WATCH out Harry Styles – you’ve got some serious competition in the daring fashionista stakes.

England and Everton striker Dominic Calvert-Lewin echoed Harry’s Gucci dresses – and David Beckham's sarong – by wearing one of the boldest ensembles I’ve seen while posing for the cover of Arena Homme + magazine. 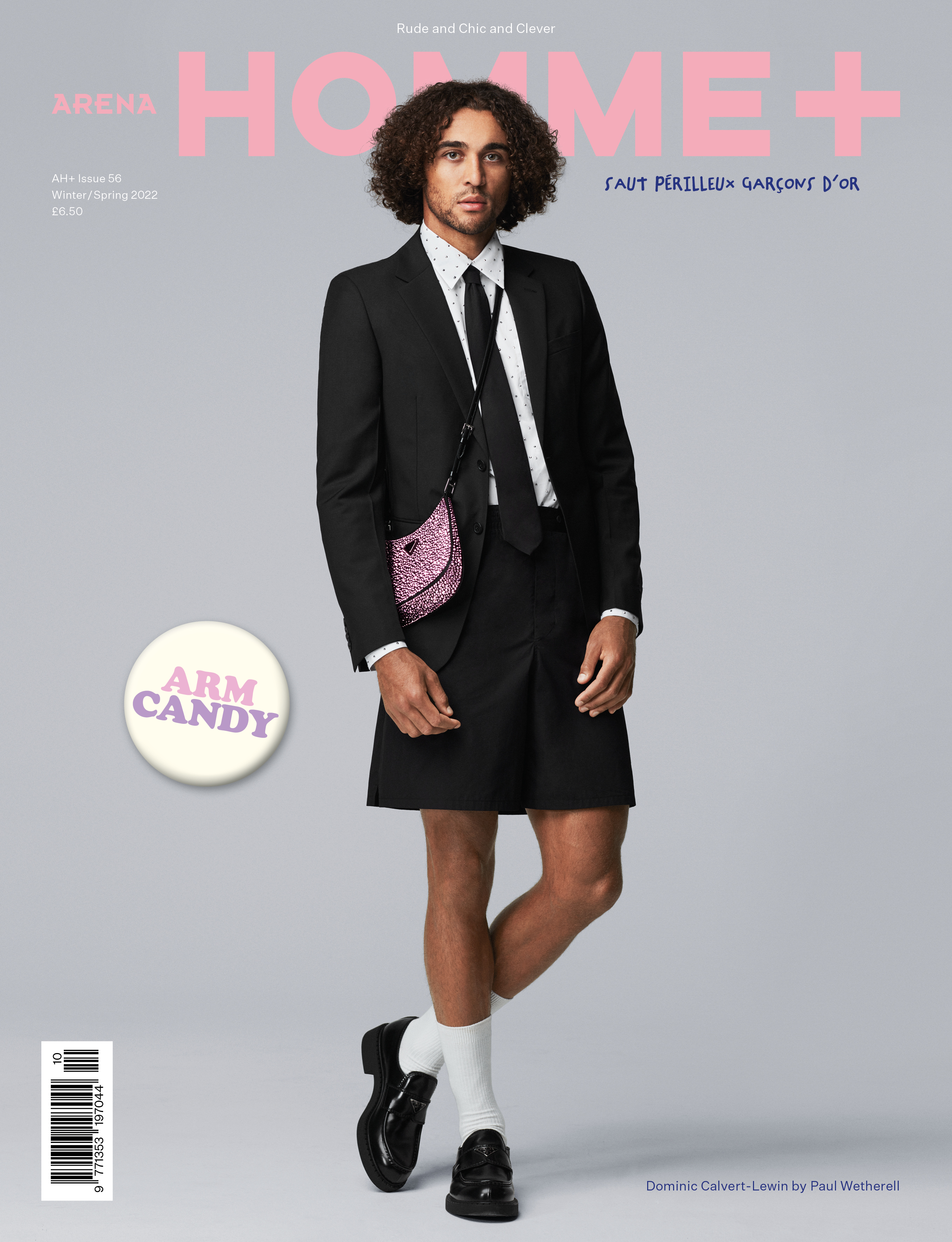 While I doubt he’ll wear it to training, I’ll admit he carries it off.

Dominic is a forward-thinking player – I hope he inspires more stars to push boundaries in the beautiful game.

And as an Everton fan, I don’t care what he wears as long as he gets us back to winning ways.

Diana life and soul of Glasto

THEY are all about girl power, so the Spice Girls ought to be chuffed to see iconic female superstar Diana Ross taking the legends’ slot at next year’s Glastonbury.

But given the fact they made no secret of being desperate to have the honour – and teased Victoria Beckham would return for it – I imagine they are gutted. 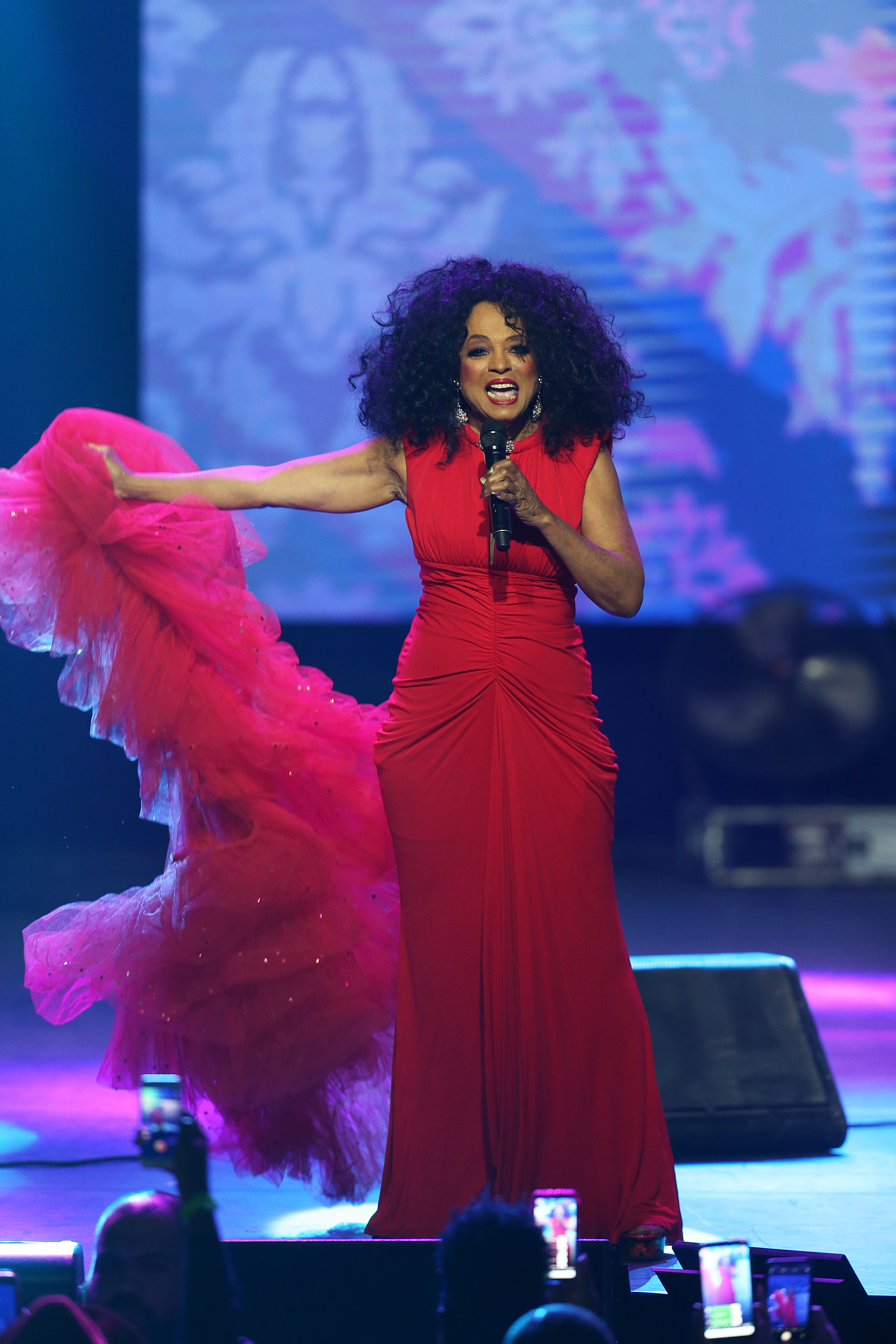 Supremes legend Diana was last night confirmed for the Sunday afternoon gig on the Pyramid Stage at next summer’s festival, as I told you on Monday.

The soul star had originally been due to take the slot – reserved for the most legendary artists and previously filled by Dame Shirley Bassey, Lionel Richie, Kylie Minogue and Dolly Parton – last year but that was scuppered by Covid.

Now she is one of the first acts to sign up for the 2022 event following two years of cancellations.

Organiser Emily Eavis tweeted: “I’m thrilled to be able to let you know that the magnificent Diana Ross is coming to play at Glastonbury next summer.

“We were so excited to book such a legend for Glastonbury 2020 and are so happy that she’s the first to re-confirm for next year.”

The only other act announced is Billie Eilish, who will be a headliner for the 50th edition of the festival.

Melanie C said in July that it would be “the dream” for the Spice Girls to perform down in Somerset.

She teased: “Between you and I, I know Mrs Beckham would love to do Glastonbury.”

It might take a bit more persuading now that slot is out the window for another year.