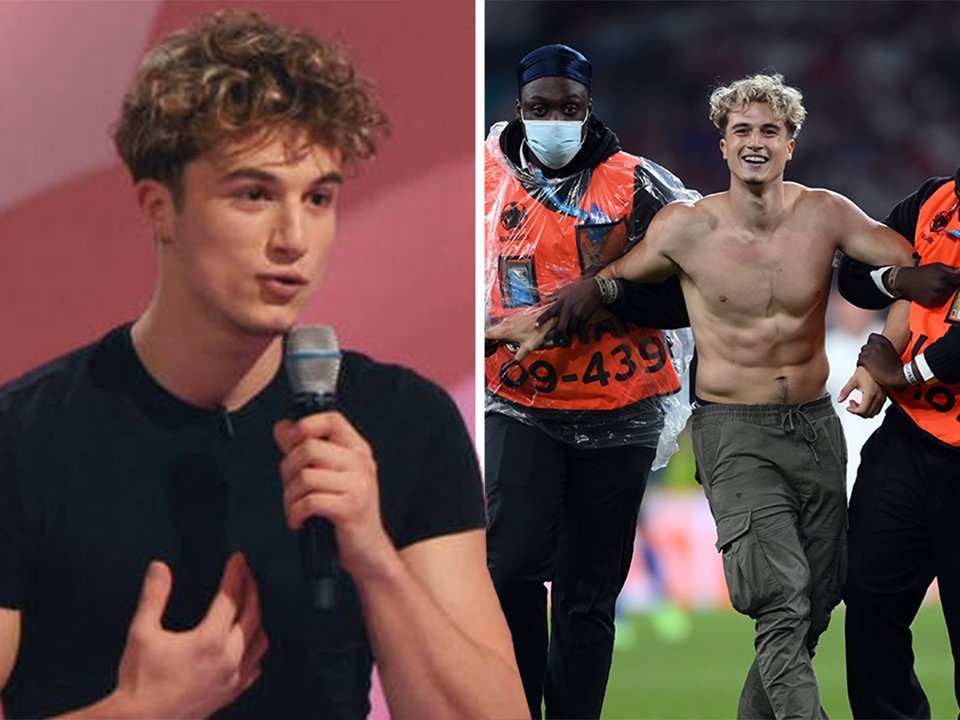 The topless pitch invader who disrupted last night’s Euro 2020 final has been revealed as a contestant on Little Mix’s reality series, The Search.

Adam Harrison charged onto the pitch during England’s defeat to Italy last night, bringing the game to a grinding halt.

Security stewards were forced to tackle him to the ground after he jumped over the advertising hoardings and dashing past several members of security.

It’s now been confirmed Harrison competed in the girl group’s series in the boyband New Priority after he gloated about his stunt on social media.

Following the match, which saw England lose to Italy in a nail-biting round of penalties, Harrison shared a photo of himself on Instagram being dragged off the pitch.

He wrote: ‘At the end of the day…. I love my country and I did this all for a good time. Nothing but love and respect for England tonight. BIG LOVE PEOPLE❤️ Always.’

He also shared a clip of the moment on his Instagram stories, and wrote across the clip: ‘Well that was fun.’

Some of his followers, however, weren’t impressed.

‘You really think thats funny?’ and ‘Oh wow your hard,’ echoed what most of the people commenting on his picture were feeling.

Harrison’s stunt came as England fans were crushed by last night’s match, the England team’s first final in an international cup for 55 years since their 1966 World Cup victory.

After a swift goal from Luke Shaw in the third minute of the game, Italy’s Leonardo Bonnuci equalised in the second half, eventually bringing the match to penalties with Marcus Rashford, Jadon Sancho and Bukayo Saka all missing their shots and sealing Italy’s win.

END_OF_DOCUMENT_TOKEN_TO_BE_REPLACED

Terrifying moment during “Thursday Night Football” … Dolphins quarterback Tua Tagovailoa was rushed to the hospital after suffering what appeared to be a significant head injury. The 24-year-old signal-caller was injured in the second quarter of Miami’s game against the Bengals … when he was wrapped up by a defender

END_OF_DOCUMENT_TOKEN_TO_BE_REPLACED

‘Brazen’ burglars who raided Perrie Edwards and fiancé Alex Oxlade-Chamberlain’s Cheshire mansion ‘gained entry using a ladder while they were at home with their baby son’ The singer and the footballer, both 29, were left ‘terrified and heartbroken’ by the ‘brazen’ thief who took off with ‘a lot of valuable