Home » ‘Friends: The Reunion’ Review: Much Hyped, Filler-Packed HBO Max Special Is For Hard-Core Fans Only

‘Friends: The Reunion’ Review: Much Hyped, Filler-Packed HBO Max Special Is For Hard-Core Fans Only

They’re really back, for better or worse.

Here’s the skinny: If you are one of the millions of Friends fans out there, then the Friends: The Reunion special debuting Thursday on HBO Max is exactly the fix you have been craving since the NBC sitcom went off the air in 2004. However, if you don’t have a standing order at Central Perk, you’ll probably want to skip the much-hyped, almost 2 1/2-hour-long shindig that is way more filler than killer, to put it kindly.

Long the Stone Temple Pilots of sitcoms, the comedy series starring Jennifer Aniston, Courteney Cox, Lisa Kudrow, Matt LeBlanc, Matthew Perry and David Schwimmer had the rare privilege of concluding on its own terms back in the George W. Bush era after a decade-long run. Adding little but TV-14 fanservice to that legacy, the mixtape of “The One Where They Get Back Together,” as the special has come to be known, is mainly an exercise in calculated commerce.

Tailored to bop from one setup to the next and never spend too much time thinking about how we go there, Friends: The Reunion was always designed to buff up the AT&T-owned streamer’s bottom line through subscribers and the spotlight.

With the well-heeled cast reportedly each paid around $2.5 million to show up, it will undoubtedly succeed on that front. Having forked out $425 million in late 2019 to snag streaming rights to all 256 episodes of the Marta Kaufman- and David Crane-created Friends for the next five years, the ever-in-flux WarnerMedia had hoped to use the sitcom reunion as a big-ticket launch pad for HBO Max last year. As with so many lofty ambitions, the coronavirus pulled the plug on that plan, at least temporarily. 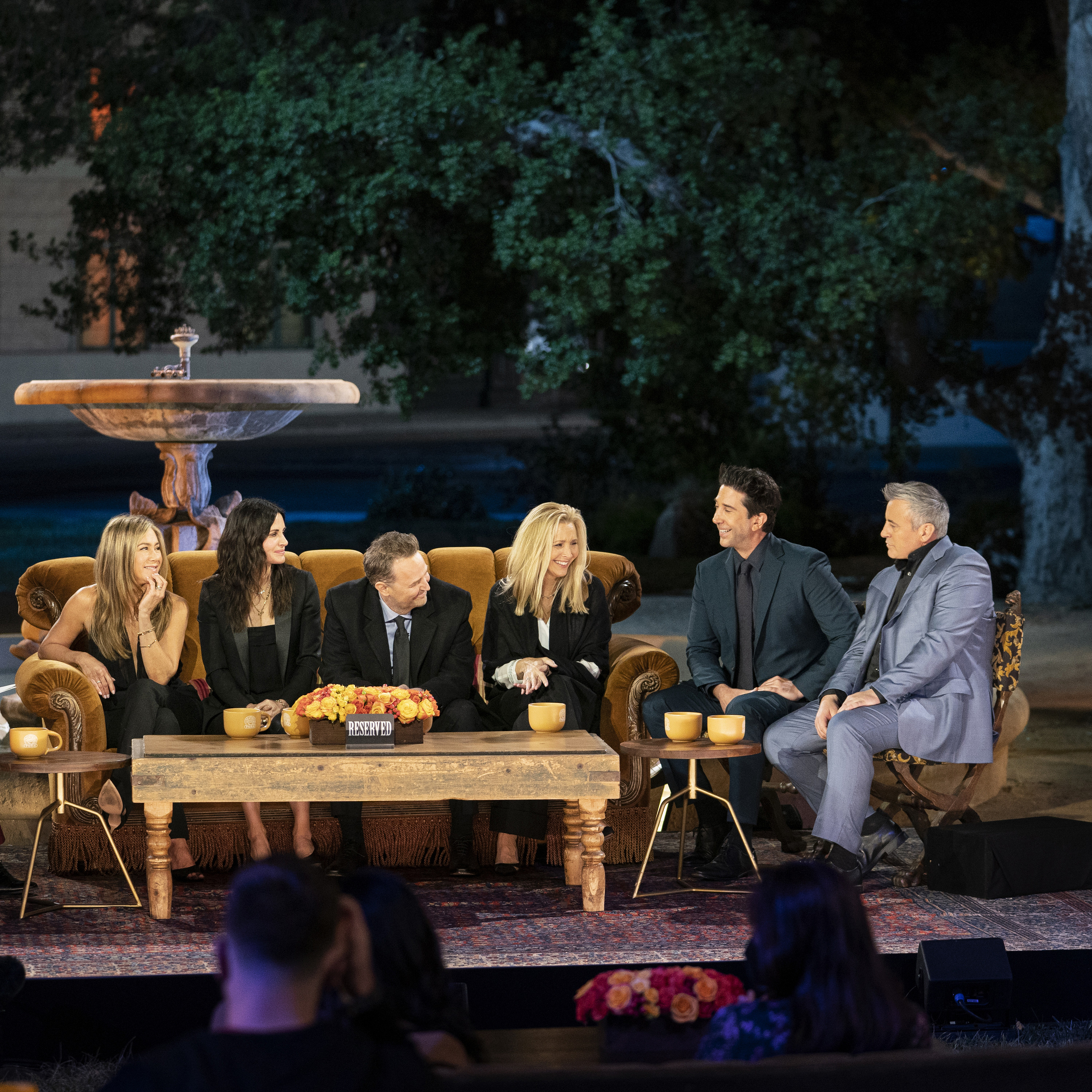 What we have now is this Ben Winston-directed effort splicing together blooper-reel reactions, behind-the-scenes trivia and hugs (lots and lots of hugs). Weaved in, there’s a visit to the series’ original soundstage on the Warner Bros lot, a table read, some “crushing hard” revelations of sorts, and a softball-tossing James Corden-hosted sitdown on the famous couch.

Amid the sentimental convergence, there’s also a fashion show and plenty of guest stars. In a nod to HBO’s more recent glories, mega-fan and Game of Thrones alum Kit Harington appears, plus additional global and generational appeal via David Beckham, BTS, Justin Bieber, Mindy Kaling, Tom Selleck and Malala Yousafzai among others. There’s also Elliott Gould along with Christina Pickles, who played the parents of Cox and Schwimmer’s Monica and Ross characters on the lily-white Friends.

Oddly, despite all that and its resemblance to the contrivance of a DJ Khaled album, the sum total of Friends: The Reunion is somewhat sloppy.

For one thing, aside from the assiduous Schwimmer, the rest of the well-compensated cast appear to be on cruise control down self-congratulatory memory lane. Additionally, unlike the felicitous Friends itself, the special steps all over a lot of its cues and beats. Proving that brevity is indeed the soul of wit, the sprawling show is often hackneyed where you’d expect spontaneity and slipshod where you’d expect slick.

Crawling out of a year of pandemic that has been packed with hit (A West Wing Special to Benefit When We All Vote) and miss reunions, the Friends special is hopefully the beginning of the end of a tired notion.

But again, hard-core fans of Friends won’t be bothered with all that. For that multitude, this is the 21st century equivalent of the Beatles in Hollywood, the best of all possible worlds in the absence of new episodes.

The fact is in an era of increasing revivals, nostalgia is a powerful American addiction, a habit that transports fans old and new to a time before a global health crisis, political insurrections, forever wars, 9/11 and even the intrusion of smartphones and broadband barreling down the information superhighway. Premiering in 1994 and always staying within its narrow fictional NYC bubble, Friends remains a patina artifact of a time when America was at peace, prosperous and unprecedented in its superpower stance.

Or, as The People v. O.J. Simpson Emmy nominee Schwimmer says at one point in Friends: The Reunion of the end of the series: “I knew it was going to end and I didn’t want it to end.”

That’ll always be there for you, and that’s what this special is all about, for better or worse.