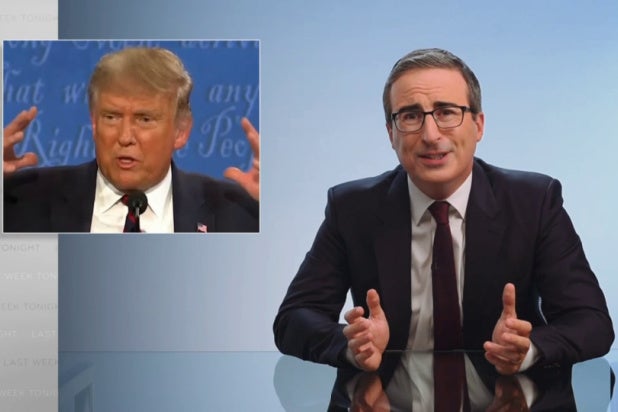 “Late Week Tonight With John Oliver” returned for a new episode on HBO this week, and to absolutely no one’s surprise, Oliver opened the episode with a discussion about Donald Trump’s COVID-19 diagnosis and the resulting fallout.

“It was news that felt both shocking and utterly inevitable. Especially given that just three days earlier he’d stood on a debate stage and when asked about whether he’d downplayed the efficacy of masks, said this,” Oliver said, before the show played the clip of Trump heckling Joe Biden for wearing a mask in public.

Oliver continued: “Biden wears a mask in situations where it’s dangerous not to. I can only imagine what Trump would be like standing next to a beekeeper. ‘I don’t wear a beekeeper suit like him. Every time you see him he’s wearing a beekeeper suit. Not me, because I’m smart and strong. This whole bee thing is a hoax anyway.’”

With the show taping a day before it airs — and inevitably behind the times on Trump’s specific circumstances — Oliver shifted away from Trump specifically and spent most of the segment talking about how the Trump’s staff at the White House has totally blown it with how they’ve handled the situation this weekend.

“So far, the White House has handled this situation terribly. First, the news only came out after reporters discovered that one of Trump’s closest aides, Hope Hicks, who traveled with him to the debate, had tested positive, prompting the obvious question of when the president learned he’d been exposed and what he’d done about it. And the answers there weren’t great,” Oliver said.

“So many of the decisions that Trump and those around him made this week look absolutely appalling in hindsight. From his family refusing to wear masks at Tuesday’s debate, to failing his notify anyone on the Biden team that they may have been exposed, to the fact that the fundraiser he attended just before testing positive was a f—ing buffet. But maybe the event that looks the worst took place last weekend.”

The event to which Oliver was referring was the event on Sept. 26 at the White House announcing Amy Coney Barrett’s nomination to the Supreme Court. Few attendees wore masks, and a number of them tested positive for COVID-19 in the following week — including Trump, Hicks, KellyAnne Conway and more.

“Much like the slew of utterly horrifying Supreme Court rulings over the next few decades, it seems we may look back on last Saturday’s White House event and say all of this began there,” Oliver said. “And there is something utterly infuriating about watching them hugging each other when many in this country haven’t seen their families for months, or have died alone in a hospital.”

But more than just that, Oliver is mad on behalf of everyone these Republicans are going to give the virus to.

“The thing about a highly contagious virus is, your recklessness could end up killing someone you never meet. And they’re still doing it. Bill Barr, who was at that event and may have been exposed, is choosing not to quarantine himself,” Oliver went on. “Meanwhile four Republicans who traveled with Trump this week, not only didn’t quarantine they showed up to the House to vote in person, then three of them took a Delta flight home. The frustrating thing is Republicans seem to be handling this outbreak the way they’ve handled the whole pandemic: With a mixture of denialism, hubris and treating it more as a PR crisis than one of public health.”

Throughout the weekend, there have been a small group of Trump supporters hanging out near the entrance to Walter Reed Medical Center, and Oliver found one of them, a young man wearing a suit but no mask, to be particularly fascinating. “Last Week Tonight” played a clip from an interview with the kid, who claimed he’s not at risk from the virus and doesn’t care if he might spread it because he doesn’t “buy into fearmongering.”

Oliver, as he so often is, was incredulous.

“You’re only there because the president the United States is in the building behind you with a pretty bad case of fear-mongering,” Oliver said.

“And as much as you want to shout at that guy, you have to remember that this administration has been downplaying the virus so much and for so long that for Trump’s die-hard supporters, any sort of concern isn’t seen as a sensible concern. It’s seen as fearmongering. But fear is not a bad thing. It’s what stops you from chopping your hand off with a meat cleaver or petting an angry dog or crossing a busy street without looking.”

END_OF_DOCUMENT_TOKEN_TO_BE_REPLACED

END_OF_DOCUMENT_TOKEN_TO_BE_REPLACED
Recent Posts
We and our partners use cookies on this site to improve our service, perform analytics, personalize advertising, measure advertising performance, and remember website preferences.Ok