90 Day Fiance: The Other Way couple Kenny Niedermeier and Armando Rubio haven’t had the smoothest journey trying to tie the knot this season.

While it’s clear that the two are committed to one another, their desire to legally marry in Armando’s home country of Mexico is proving challenging.

And although many fans of the show have been supportive of the couple, they have received comments saying that neither of them did their due diligence in researching Mexican laws as they pertain to same-sex couples and their rights to marry.

Taking to his Instagram stories, Kenny called out those followers, saying that they don’t understand the full scope of what he and Armando have been through.

In the Instagram story, Kenny spoke about the negative comments he’s seen floating around on social media.

“I have seen so many negative comments out there on Armando and my journey to get our marriage license approval from people who obviously are not watching the scenes clearly as they are saying why didn’t we do our research (I’m wording it much nicer here) and we are obviously acting as it was all scripted,” he wrote in the post.

Kenny continued, “We are not actors and nothing was scripted. It’s clear in the scenes if you watch clearly and without judgement…we did our research and knew The Supreme Court of Mexico ruled same-sex marriage legal throughout Mexico, we even checked to make sure our state in which we live it was indeed legal, it is (34 same [sex] marriages have been performed at the time).”

He then went on to explain how the couple went through the process of calling the marriage office to inform them that are a same-sex couple. Kenny claimed that the office told them what documentation they should bring with them when they came to the office. “They gave us no indication we were going to be denied, so it was a shock when we were,” he explained 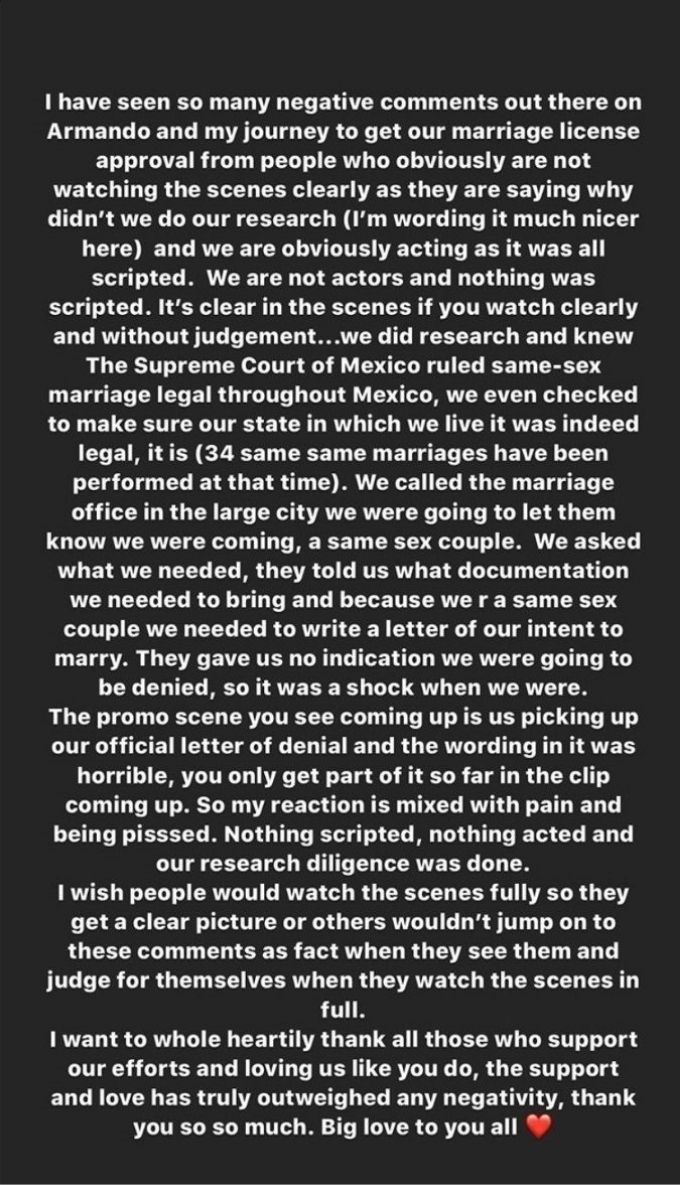 Kenny also explained his reaction in the new promo clip for the show when the couple picks up their official letter of denial.

“You only get part of it so far in the clip coming up. So my reaction is mixed with pain and being pissed. Nothing scripted, nothing acted and our research diligence was done.”

Kenny concluded the post by saying that he wished “people would watch the scenes fully so they get a clear picture” instead of jumping to conclusions.

As for their supporters, Kenny says, “I want to whole heartily thank all those who support our efforts and loving us like you do, the support and love has truly outweighed any negativity, thank you so so much. Big love to you all.”

END_OF_DOCUMENT_TOKEN_TO_BE_REPLACED

END_OF_DOCUMENT_TOKEN_TO_BE_REPLACED
Recent Posts
We and our partners use cookies on this site to improve our service, perform analytics, personalize advertising, measure advertising performance, and remember website preferences.Ok