Kim Kardashian shared a kiss with Pete Davidson as she made her hosting debut on Saturday Night Live.

The Keeping Up With The Kardashians star, 40, proved that she can hold a captive audience and laugh at herself as she helmed the most recent episode of SNL, kicking things off with a savage opening monologue.

She also showed off her acting chops in a series of sketches, most notably as Princess Jasmine in a take of Disney’s Aladdin, with comedian Pete, 27, starring as her lover.

The pair were seen enjoying a ‘magical carpet ride’, before he confessed that there is something that he needed to tell her.

She replied: ‘Do you feel self conscious because I’m the daughter of a Sultan and you are just a lowly street rat?

‘Are you intimidated that I’m friends with a ton of wealthy celebrities and your only friend is a monkey?’ 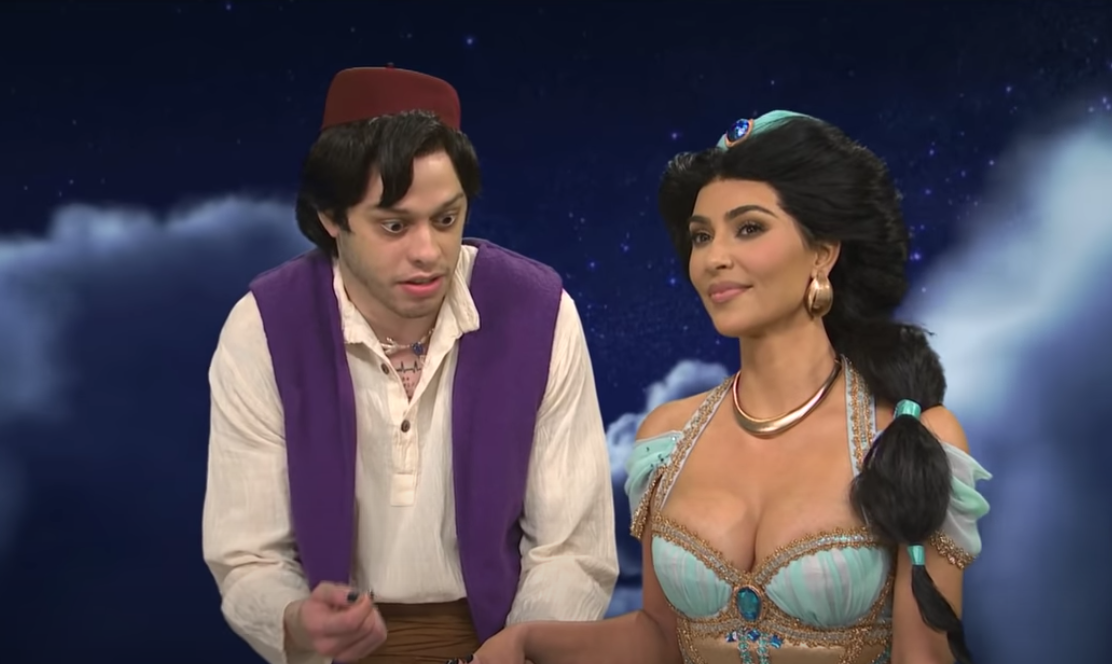 Laughing off the brutal digs, he continued: ‘Jasmine, as we start getting more intimate, I’m just a little concerned that physically, I can’t handle you…

‘If we go all the way, you might like break me… My thing might just break. Look at us. You’re a lot of woman and I’m so frail because all I eat is stolen bread.

‘I want do everything with you, see the world, laugh together, sing songs and do sex.’

‘Aladdin, don’t worry. I’m sure that you’re more than enough man for me,’ she enthused.

At the very end of the scene, the pair shared a kiss before a genie popped up and belted out A Whole New World.

Fans were living for their antics, and flocked to Twitter to heap praise on their performance.

‘A 2021 sentence: Here’s Pete Davidson and Kim Kardashian West kissing as Aladdin and Jasmine while she hosts SNL,’ one joked.

Another agreed: ‘Kim Kardashian and Pete Davidson kissing really is sending me #snl.’

‘KIM AND PETE?? WHAT THE F**K IS HAPPENING #snl,’ a follower screamed.

‘Pete Davidson and Kim Kardashian killed it on this sketch lmao. #SNL,’ a Twitter user praised.

‘The way I squealed when Kim and Pete kissed on snl,’ a viewer added.

Elsewhere on the night, the mum-of-four took aim at her own divorce from Kanye West and her sisters’ rumoured plastic surgery in her opening monologue.

Momager Kris Jenner and sister Khloe Kardashian also got in on the action, joining in one skit where Kim switched places with SNL cast member Aidy Bryant.