Home » TV & Movies » Miguel Sapochnik’s ‘Game of Thrones’ Rise: From Pissing Off Creators to Being Their Go-To Director

Miguel Sapochnik’s ‘Game of Thrones’ Rise: From Pissing Off Creators to Being Their Go-To Director

Miguel Sapochnik didn’t get off on the right foot when he was brought on as a replacement director during “Game of Thrones” Season 5. He had left his passport in Los Angeles and by the time he arrived in Belfast, 30 members of the production team were at a quarry waiting for the director to approve the location for the epic battle in “Hardhome.” Sapochnik, unprepared and not knowing how to respond, simply said, “Sure.”

He was then promptly left by himself in Belfast and told to check out other sets, which were 60 miles apart. Production designer Deborah Riley took pity on the new director and stayed behind to show him around.

“If I hadn’t of had Deb, I would have never found any of those places, I would have sunk at that point,” said Sapochnik when he was guest on IndieWire’s Filmmaker Toolkit podcast. “And later on, I realized that was kind of their policy. It’s like sink or swim, and I’d lost my passport on the way, so it’s like, ‘This guy’s an idiot, let’s let him sink.’”

On day two of shooting “The Gift,” part of the director’s two-episode block along with “Hardhome,” Sapochnik ran into problems with creators David Benioff and D. B. Weiss. He shot a scene of Cersei and Tommen through bars, to symbolize being imprisoned. Then in shooting Maester Aemon’s death bed scene, Sapochnik graphically matched the cut, magically transitioning Aemon to his funeral pyre with his bed pillow still under his head.

“[Benioff and Weiss] said [it was] ‘so self-conscience and we hate it basically,’” recalled Sapochnik, who quickly learned Benioff and Weiss liked a classic, unified, David Lean style and frowned on a director imposing his own specific cinematic flair to their show. “I was visually policed for the first three months of my shoot and it made the creation of ‘Hardhome’ really difficult because I pissed them off.”

Subscribe via Apple Podcasts to the Filmmaker Toolkit Podcast

With “Hardhome,” Sapochnik struggled with the incredible scope of the battle as it was originally written, considering how few days he had to shoot the scene. He was working with a location in which the still water around the quarry looked nothing like the ocean written into the script, and he was having to shoot around the King’s Landing set, which had to be preserved for future seasons.

What’s more, the visual effects demands of the scene required the director to pre-visualize scenes he didn’t want to fully design. He preferred a more experiential approach to creating the chaos of battle on set and finding the best way to capture it. Turning his negatives into positives, the director took an approach that served as the basis for how he would direct future battles. First, he would limit the scope of what could be seen in frame, placing the white walkers on the other side of a wall they would breakdown like in a horror film. He then would create an environment to stage real visceral action he could capture, not design.

“The problem I have with most action scenes today is they are too designed,” said Sapochnik. “I can’t shoot this if I can’t create a sustainable environment for my actors to work in. I wanted to create a place, a playground the actors could get so immersed in it that they were in the real thing.” 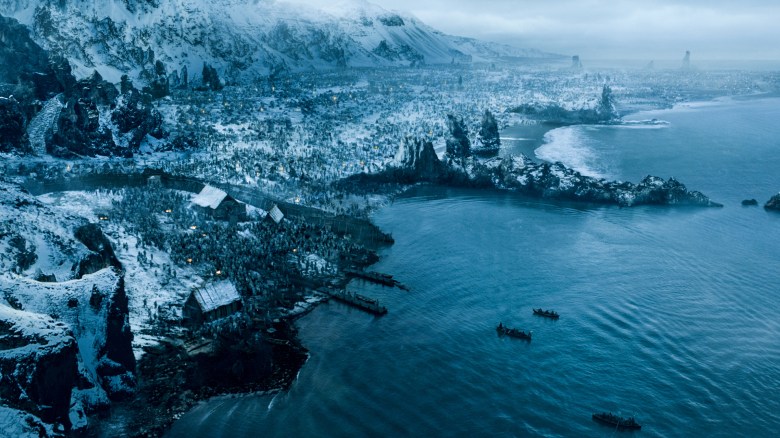 Sapochnik learned early in his TV career the key to making something look real was to engage and involve the extras, and one of the real assets on “Game of Thrones” was the 250-300 highly engaged extras he could use to create controlled chaos. “We had a group of extras who were insanely loyal to the show and they were ready and they’d do bloody anything,” said Sapochnik. The director created a space and environment to stage battle games, like bulldog, for the extras and 60 stunt performers in what was a largely safe environment (but a few real punches were thrown).

“The style that evolved from ‘Hardhome,’ that then was used subsequently as we went through the rest of ‘Game of Thrones’ was born in part out of weird necessity to find a functional and efficient way of shooting,” said Sapochnik. “And at the same time to do it without shaking things up, because that’s what Dan and David did not want.”

After the success of “Hardhome,” Sapochnik not only found himself free from being visually policed, when he returned to direct “Battle of the Bastards” during Season 6, he found Weiss and Benioff allowed him the freedom to use more cameras — up to four — and a faster shutter speed, both of which were definite no-no’s on the show. He wasn’t expected to pre-viz his shot exactly like he would ultimately shoot them on location either.

What’s more, when he did disagree with the creators, or need to reign in the scope of an episode, or wanted to change the narrative arc of a battle scene, he learned how best to approach his now supportive collaborators.”Dan and David don’t want to be told you can’t do something,” said Sapochnik. “You need to offer a solution as well.”

The Filmmaker Toolkit podcast is available on Apple Podcasts, Overcast, Stitcher, SoundCloud, and Google Play Music. The music used in this podcast is from the “Marina Abramovic: The Artist is Present” score, courtesy of composer Nathan Halpern.