Nine promises to do better after State of Origin streaming woes

Nine has promised it has a plan to tackle further streaming issues like the ones experienced by State of Origin viewers on Wednesday night.

The first State of Origin clash between the Blues and Maroons was marred by technical difficulties for those trying to watch the game on Nine's streaming service 9Now. 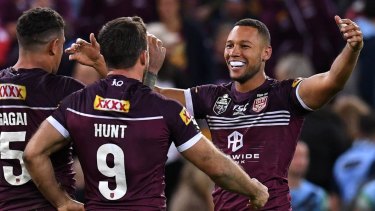 The Maroons celebrate their win at the end of game one for the 2019 State of Origin. Credit:AAP

Viewers complained of buffering, poor audio and being unable to watch the main feed through 9Now and flocked to social media to describe the service as "not good enough", while others went as far as to call the coverage "bloody disgraceful". Nine, the owner of this masthead, originally told viewers the streaming issues were caused by "unprecedented demand". However, on Thursday morning a spokesman said the issues originated with a video supplier.

"9Now had a technical issue with one of the service providers last night," he said. "As soon as the source of the issue was identified, we worked as quickly as possible to fix the service which was in total impacted for around 30 minutes.

"We apologise for any inconvenience and have put plans in place to prevent similar technical errors."

The traditional TV broadcast of the match, however, went off without a hitch and pulled in massive numbers of viewers. The game was watched by an average 2.18 million people across the capital cities, making it the most-watched overnight program of 2019 so far.

Earlier this year, that title was given to the Married at First Sight finale which netted an average 1.98 million metropolitan viewers. The third-most popular program this year was the men's final for the Australian Open (1.59 million), followed by the finale of surprise-hit Lego Masters (1.48 million).

The second State of Origin game will be held on Sunday, June 23 at Perth's Optus Stadium. The three-part showdown between Queensland and New South Wales will conclude at Sydney's ANZ Stadium on Wednesday, July 10.