“Harry, Meghan and Archie will always be much loved family members,” statement by way of Buckingham Palace says 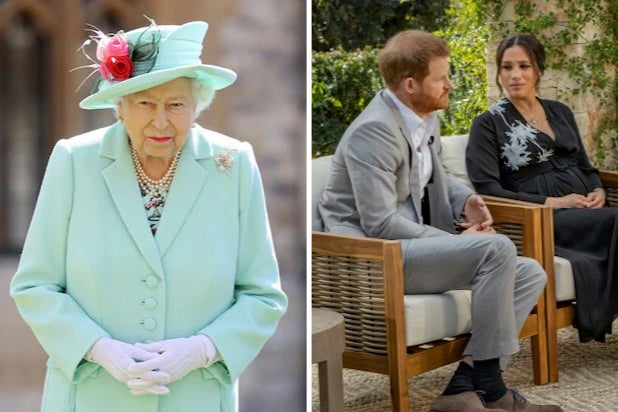 Queen Elizabeth II says the royal family was “saddened” to learn in Sunday’s Oprah interview just “how challenging the last few years have been” for Prince Harry and Meghan Markle.

“The whole family is saddened to learn the full extent of how challenging the last few years have been for Harry and Meghan,” the queen said in a statement issued by Buckingham Palace on Tuesday. “The issues raised, particularly of race, are concerning. While some recollections may vary, they are taken very seriously and will be addressed by the family privately.”

“Harry, Meghan and Archie will always be much loved family members,” the statement concluded.

In case you missed Oprah Winfrey’s bombshell interview on CBS — and considering these ratings not that many of you did — find our nine biggest takeaways from the two-hour primetime event here.

On the issue of race, Markle told Oprah that members of the royal family expressed “concerns” about the skin color of their (then-unborn) son, Archie.

The former “Suits” actress told Winfrey that while she was pregnant, unidentified members of Harry’s family had “conversations about how dark his skin might be when he’s born.”

Markle, who identifies as mixed-race and whose mother is Black, declined to identify the royal family members in those conversations, adding, “I think that would be very damaging to them.” She also added that the concerns were not raised directly to her but to Prince Harry.

On the following day’s “CBS This Morning,” Winfrey said that Harry had told her that neither his grandmother, the queen, nor his grandfather, Prince Philip, had participated in those conversations.

Markle also said the palace wanted to deny Archie security and the title of “prince” — even before he was born.

The reception Markle felt from the royal family led her to contemplate suicide before she and Prince Harry left England, she told Oprah.

“I just didn’t see a solution,” Markle said. “I realized it was all happening just because I was breathing. I was really ashamed to say it at the time and ashamed to admit it to Harry, especially because I knew he had suffered. But I knew that if I didn’t say it — then I would do it. I just didn’t want to be alive anymore. That was clear and real and frightening and constant thought.”

But when she attempted to get mental health care, Markle said the palace made it extraordinarily difficult. “I went to one of the most senior people to get help,” she said, asserting that she was told “there is nothing we can do to help you because you are not a paid member of the institution” and that getting treatment “wouldn’t be good for the institution.”