Quentin Tarantino Will Run the Vista Theater in Los Angeles — but 35mm Only, Please

Quentin Tarantino revealed on a podcast with Dax Shepard that he has purchased the Vista Theater in Los Angeles and plans to reopen the 400-seat, single-screen theater by the end of the year. Unlike his New Beverly Theater, located five miles east in the Fairfax neighborhood, the Vista will program first-run films — but only those available in 35mm.

Tarantino’s 35mm first-run policy is a gamble since it requires that a studio provide a 35mm print, an extra expense. However, he’s a principal with the profile, and filmmaker support, who could make this happen.

The theater, which first opened in 1923, is located at the juncture of the East Hollywood, Silver Lake, and Los Feliz areas of Los Angeles. The area is both full of movie history and currently a vibrant, thriving residential area full of industry professionals and cinephiles who might welcome the chance to have a chance to see films on 35mm, something that’s become nearly impossible in the age of DCPs. 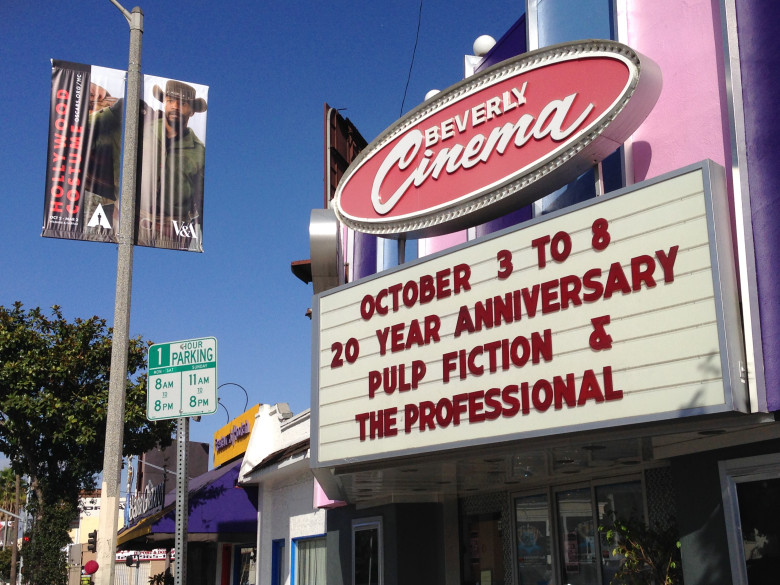 The booking policy would be distinct from his New Beverly Theater, which is devoted to creative and eclectic 35mm repertory programming. That 300-seat theater recently reopened and it as busy today as it was before COVID.

Located at 4473 Sunset Drive, the Vista Theater is across the street from where D.W. Griffith built his legendary Babylon set for “Intolerance” in 1916, and blocks away from where Monogram, the most successful B-movie studio, had its studio. Still functioning century-old apartments where early film pioneers held residence add flavor to the area.

Until around 1950, the theater was a typical neighborhood cinema that showed current films after their initial Hollywood engagements. Initially it was a cramped 800 seats; remodeling in the late 1990s reduced it to a more spacious 400. As with many early cinemas, the theater was themed; here, it had an Egyptian feel inspired by the then-recent discovery of King Tut’s tomb.

The theater turned more eclectic in the 1950s, showing older films as a precursor to what became repertory. A period in which it focused on foreign-language arthouse films followed. By the 1970s, it turned to X-rated titles, including gay ones by late in the decade.

Landmark Theatres, then focused on repertory titles, briefly operated it in the 1980s. It reopened in 1998 under Vintage Cinema, which also owned the Los Feliz Theater. First-run films at the Vista often moved to the Los Feliz.

Today, the Los Feliz operates under the management of the American Cinemateque, which also operates the Egyptian in Hollywood (in partnership with Netflix) and the Aero in Santa Monica, all of which have repertory policies.