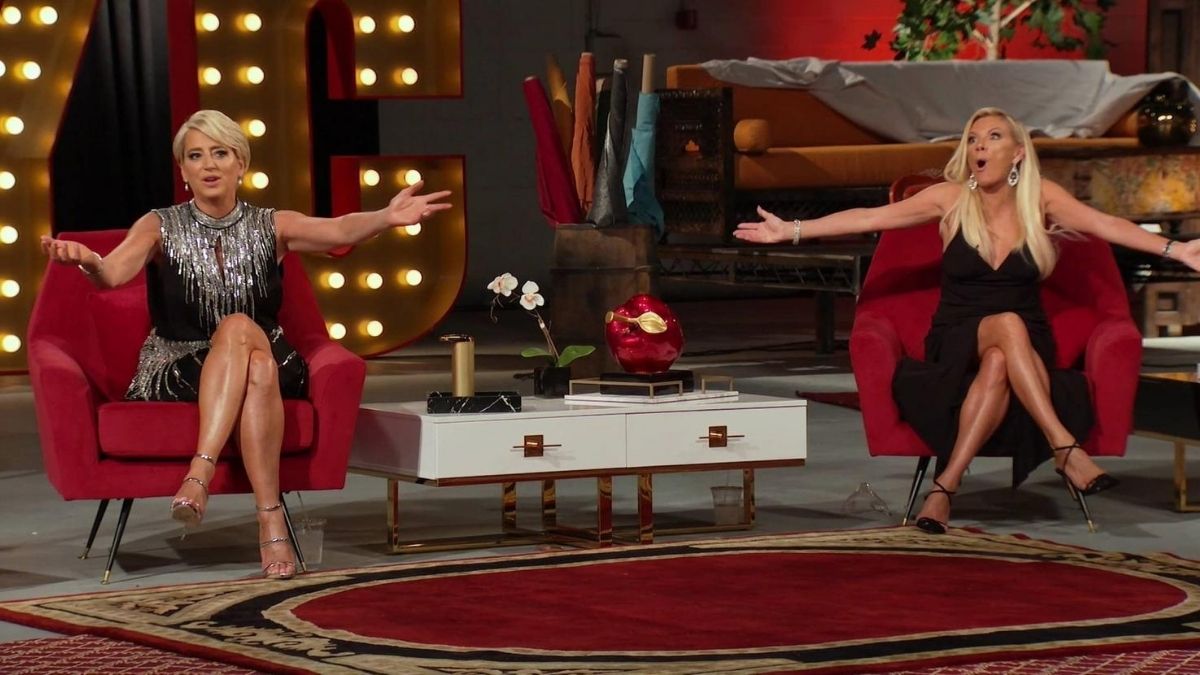 Season 12 of The Real Housewives of New York City is winding down with only a few episodes left.

We are already looking forward to what promises to be an explosive reunion between the ladies.

Now that Dorinda Medley has reportedly been fired from the show, it will be interesting to see how she reacts to being confronted about her behavior this season.

Judging from the clip, the 55-year-old is not taking any responsibility, and this might have been the final straw for Bravo execs.

For now, fans will get to enjoy the last 2 episodes in the season, before the reunion airs.

The first installment of the three-part RHONY reunion will officially kick off on  Thursday, September 10 at 9/8c.

This will mark the first in-person reunion for the Bravo network since the COVID-19 pandemic.

It will also make history as the show’s first socially-distanced reunion.

Dorinda Medley, Leah McSweeney, Luann de Lesseps, Ramona Singer, Sonja Morgan and Tinsley Mortimer will all be in attendance and clad in their fanciest attire.

However, instead of cozying up on couches, the ladies will be at a safe, six-foot distance from each other.

Host Andy Cohen will rehash an emotional season with the RHONY women.

In the clip, we see the cast express their frustrations with Ramona regarding her careless behavior during the quarantine.

Bravo media notes that fan favorite, “Leah revisits the highs and lows of her first season, and spills the tea on how the uptown ladies reacted to her downtown attitude.”

Also, “A very glowing Tinsley updates the ladies on her relationship with Scott and life in Chicago, but things quickly heat up when Dorinda calls her out for not being transparent with the group and finishing the season early.”

Dorinda gets called out in part-three of reunion

Part two of the RHONY reunion will air on September 17 with the cast trips being the topic of conversation.

Ramona will address her issues with Leah during the second part of the reunion as well.

Plus, tempers will flare when the 63-year old makes the claim that the Married to the Mob owner ruined her birthday party due to her risqué dance moves.

The following week, on September 24 viewers will see the third and final installment of the reunion.

Newly fired housewife, Dorinda Medley will be in the hot seat as “she defends herself against accusations that she has an issue with controlling her anger.”

Following the three-part reunion, Bravo will air never-before-seen footage of the show in an episode called “Secrets Revealed.”

This special will air on Thursday, October 1 at 9/8c.

See a sneak peak of Season 12 reunion below.

On September 10, the gloves (and the masks) come off for the unprecedented and explosive #RHONY Reunion!

On September 10, the gloves (and the masks) come off for the unprecedented and explosive #RHONY Reunion!

The Real Housewives of New York City airs Thursdays at 9/8c on Bravo.

END_OF_DOCUMENT_TOKEN_TO_BE_REPLACED

END_OF_DOCUMENT_TOKEN_TO_BE_REPLACED
Recent Posts
We and our partners use cookies on this site to improve our service, perform analytics, personalize advertising, measure advertising performance, and remember website preferences.Ok