The ‘Green Lantern’ actor puts together his reactions to fans’ speculation that he will be taking on the role in the sequel and his cellular service provider Mint Mobile beating out its competitors in one tweet.

AceShowbiz –Ryan Reynolds has killed two birds with one stone with his latest hilarious tweet. As he has been touted by fans to take on the role of Johnny Cage in “Mortal Kombat 2“, the Canadian-born actor has responded to the news by combining it with his reaction to the success of Mint Mobile.

In his Wednesday, April 28 tweet, the 44-year-old hunk posted a GIF of his face being edited into Johnny Cage’s image from the video game. The picture suggested that he has just knocked down his foe, with “Mint” and “Big Wireless” written on the video game health bars.

“What do I do with casting rumors and wireless competitors upset that @usnews just named @Mintmobile 2021’s best cell phone plan?” Reynolds wrote in the caption. He added, “Finish ’em!!” 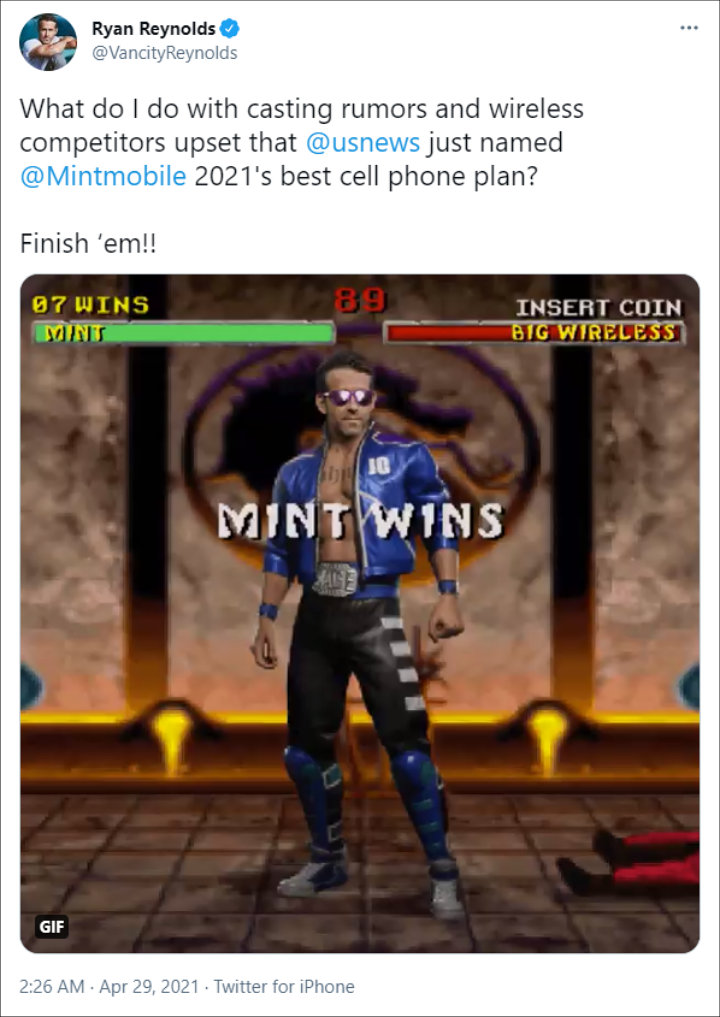 The “Deadpool” star was bragging about Mint Mobile, the cellular service provider company which he co-owns, defeating its competitors on the list of best cell phone plans.

As for the “Mortal Kombat 2” casting rumors, Reynolds has been a popular pick to play Johnny Cage after the first movie hinted at his appearance in the hypothetical sequel. In the end of the martial arts fantasy film, Lewis Tan‘s Cole Young is heading off to Hollywood where he may bump into the movie star.

Producer Todd Garner has also confirmed Cage’s appearance in the potential sequel and mentioned Reynolds as the kind of actor who might play the character. “Is it a cop out to all of a sudden have Ryan Reynolds – not him, but you know – as the lead felt a little disingenuous to me,” he said when addressing Cage’s exclusion in the first movie. “It’s super easy to bring him in a big, bombastic, fun way in the second. And he deserves that as a character. I love these characters, so we thought hard about it.”

“Mortal Kombat” has become the latest hit in North America box office following its release last week, debuting at No. 1 on the chart with $23.3 million despite not-so-glowing reviews from critics. The movie exceeded industry expectations with its opening gross and has accumulated $51.1 million worldwide.