Shortly before the People’s Princess drives solo into this latest telling of her tale behind the wheel of a top-down convertible, an opening epitaph promises us, “A fable based on a true tragedy.” But then, given the tight narrative focus of Pablo Larraín’s “Spencer,” which takes place in 1991 over the course of three excruciating yuletide days at the royal estate of Sandringham, one might ask: To what tragedy does that opening inscription refer?

Is the onetime Diana Spencer a tragic figure because of her life — her unhappy marriage, her impossible expectations, her– listen, there are two seasons of “The Crown” about this, you already know the story — or because of her death, which arrived five and half years outside the scope of the film? This film would say both.

With “Spencer,” director Larraín and screenwriter Steven Knight have devised an often-unnerving portrait of a pop icon that works from the (almost certainly correct) assumption that in the hearts and minds of today’s public, those two facets of Diana’s story are inextricably linked. Without delving into the specifics of what happened one terrible night in Paris, Diana’s sad fate hangs over the film like a shroud, informing everything that follows.

Doing away with any pretense of docu-realism, “Spencer” is neither a film about specifics nor any of conventional biopic; it is instead a sort of haunted house chamber piece that doesn’t try to locate the real woman behind the legend — as the title might suggest — as it does to reimagine her within a wholly different pop lexicon. If Larraín dipped his toe in gothic waters with “Jackie,” and its many scenes where Natalie Portman drifted through an empty White House like a ghost haunting her previous life, here he jumps all the way in, staging “Spencer” as a psychodrama swimming the same tides as “Repulsion,” “Rosemary’s Baby,” or “Black Swan.”

Often reacting wordlessly against an oppressive Jonny Greenwood score of dissonant strings and wailing horns, Kristen Stewart meets her character halfway, adopting Diana’s posh inflection while playing her with the same waifish and haunted affect the actress put to such good use in her work with Olivier Assayas. So brash in its affectations as to occasionally cross the line into pure camp, the film finds little use for subtlety and no secret of its intent. When a patrolman catches Diana walking the grounds late one fog-filled night, the princess begs the guard not to report it. “Say you saw a ghost,” she offers instead. 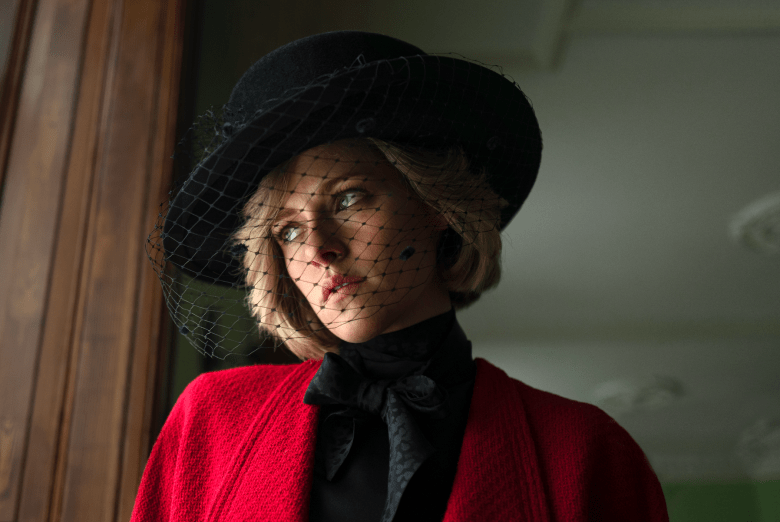 More narratively threadbare than “Jackie” if not quite as formally rebellious as “Ema,” this latest in Larraín’s eclectic filmography stakes out an interesting middle ground between those previous two. For nearly all of its running time, “Spencer” charges forward as a series of set pieces tracking the acute psychological damage being in this gilded prison does to the young woman. The damage manifests in countless ways, from bouts of bulimia and self-harm, hallucinations of another doomed royal, Anne Boleyn, to a standout (and entirely dialogue-free) dinner scene where a string ensemble appears out of the blue, playing against Greenwood’s jolting score.

Tracking Diana over the course of three days, from her arrival at the sprawling estate on Christmas Eve to her decision to leave (both the estate and family) two days later, the script pointedly avoids any shouting matches or scenes of domestic drama. Charles (Jack Farthing) gets his first line of dialogue at right around the one-hour mark, turning up next to Diana as a particularly uninteresting tablemate at an entirely leaden formal banquet. That first line? A contemptuous barb — delivered with aristocratic dispassion, naturally — about her eating disorder.

And if all the familiar royals show up here and there, few get any more screentime than shots of the lavishly prepared feasts, while none are given even a fraction of the dialogue offered to the house staff, here represented by the sterling trio of Sean Harris, Timothy Spall, and Sally Hawkins, proving once and again the limitless durability of the English character actor. The three weave their way through the manor’s halls, helping to ground Diana (and “Spencer”) in the lulls between set-piece freak-outs.

Only for all their onscreen talent, the trio also reflects some of the real limitations in Larraín and Knight’s chosen approach. In this hermetically sealed, closed circuit of manor, everything — every action and conversation and line of dialogue — reflects everything else. Which is to say that when the house’s kind-hearted head chef (Harris, playing against reedy type with real warmth) tells Diana about the pheasants the groundskeepers breed for hunting, or when the coldly impassive butler (Spall, whose slimmed down figure, sunken jowls and cold mien gave him the air of the most British man to ever work at the Overlook Hotel) talks about his military sacrifice for the Crown, the subtext — if you could even call it subtext — never changes.

Nor, for that matter, does Diana. Maybe because the timing is still too soon, perhaps the real figure is still too defined, but whatever the case, Knight and Larraín don’t allow themselves the same freedom with Diana the character — with her background and motivations and reactions within the moment — as they do with the film’s form. Stewart does terrific work as this royal-turned-scream-queen, but one does get the sense that she could be even better were “Spencer” to allow the character to go as wild as everything else does around her.

For all its impressive formal swings, the film’s aura of repetitive, notes-on-a-theme fatalism can wear thin over time, which is very much the point. In that respect, Larraín shows his cards in a late, beautifully acted scene between Stewart and Hawkins that offers, with its change of scenery, a change of pace, a blast of light and human warmth. And as “Spencer” lingers within that sunnier tempo throughout its closing moments, it ironically reveals the figure’s third great tragedy: That there was another kind of world open to Diana, another sort of life possible for her all along.

“Spencer” premiered at the 2021 Venice Film Festival. Neon/Topic will release it in theaters on November 5.