“Girls just want to have guns!” 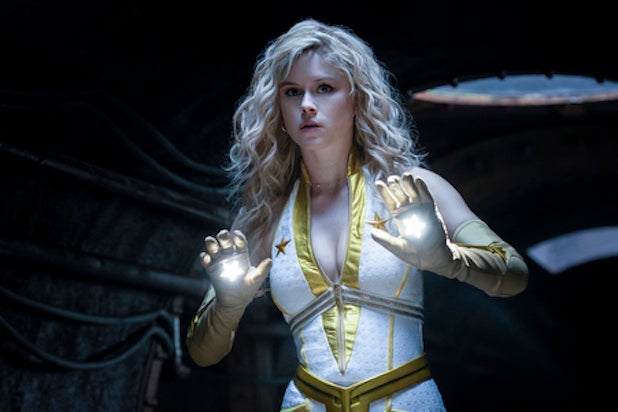 As all fans of “The Boys” know, girls get it done. But in Season 3, the Amazon Prime Video superhero series is going to take that snappy phrase to a new, terrifying level.

On Saturday, “The Boys” showrunner Eric Kripke tweeted three pictures teasing Season 3 — which recently went into production in Toronto, Canada — and its new in-universe line of lady-themed firearms, “GalGear” made by Vought, the multi-billion dollar conglomerative that founded the Supes of the Seven.

One of the photos is an ad for the fake product, featuring a white woman with a blonde bob named Linda Lockett — a stereotypical “Karen,” as this kind of person is sometimes referred to (and definitely was in the comments section of Kripke’s tweets) — holding a black rifle. The ad for “GalGear by Vought” includes this quote from Lockett, “I love protecting my family!”

A second picture showed a young girl holding a firearm next to the slogan, “Girls just want to have guns!” The third photo Kripke shared was a close-up shot of one of these “GalGear by Vought” guns with pink detailing.

Does this mean that Vought, after going through congressional hearings in “The Boys” Season 2 and backlash over the reveal it has used Compound V to create superheroes, is finding new ways to win over/make money off the American public in Season 3? Probably.

Of course, we actually know very little about what’s going on in Season 3 of “The Boys” right now, though Kripke previously gave TheWrap a few hints about where things are headed for both Homelander (Antony Starr) and his Supes and Butcher (Karl Urban) and The Boys, which you can read here.