“You get a job, you become the job.” That’s what a veteran cabbie named Wizard tells born-again hack Travis Bickle in Martin Scorsese’s “Taxi Driver,” which Paul Schrader wrote just before he turned 30. “I envy you, your youth,” he goes on to say. “Go on, get laid. Get drunk. Do anything. You got no choice, anyway. I mean, we’re all fucked. More or less.” As Travis learns the hard way a few reels later, Schrader typically falls on the side of “more,” but not without any margin of error.

Many of the films that Schrader went on to direct himself — especially the ones whose very titles enshrine a certain vocation — have revisited the “God’s lonely man” archetype he received like communion from Robert Bresson, each of these implosive portraits cloaking their lead character’s private anguish underneath whatever profession they’ve chosen to wear like a costume. “You get a job, you become the job.” And that job allows these men to hide in plain sight as they wait for the chance to play their hand.

In that light, the most unexpected thing about “The Card Counter” is that it took Schrader this long to make a movie about a poker player. The premise is so perfect for him that the film around it almost sounds redundant; one look at the weirdos and wannabes sitting around the no-limit hold ‘em games that obscure cable networks like to air during the awful hours of the night and you’ll swear that Schrader deserves a writing credit on their lives.

They hunch around the felt and bare their souls out loud whenever the river gets wild, asking themselves the sort of rhetorical questions that Schrader’s characters tend to pose into a mirror or scribble into the diary they keep next to their drink. “Was he chasing a flush draw?” “You talkin’ to me?” “Will God forgive us?”

What’s riveting about “The Card Counter” — what makes it a fresh riff on Schrader’s usual formula, and broadly absolves it from lacking the transcendent power of a “First Reformed” — is that William Tell (Oscar Isaac) is actually trying to work out a clean answer. He’s trying to take expiation into his own hands and live to enjoy it. The math is more absolute with blackjack than hold ‘em, but a good poker player can look right through the cards, and William is nothing if not a good poker player. If he can see into someone else’s soul, maybe he can see into his own. And if he can see into his own soul, odds are that he might even be able to fix it from within the purgatory of his own existence before heaven and hell have to get involved.

The difference between “First Reformed” and “The Card Counter” is the difference between asking “Will God forgive us?” and “can we forgive ourselves?” It’s not a matter of potentiality, but rather a question of possibility. Schrader’s latest is still baptized in the same religious asceticism that runs through so many of his films, but its lonely man is only focused on the things he can control. “I never imagined myself as someone suited to incarceration,” William tells us at the top of the film’s laconic voiceover narration, but the decade he spent in military prison taught him to love a certain routine and lack of choice. Even in a jail cell, it can be freeing to know what you have the power to change and what you don’t.

William is pretty forthcoming with these pearls of wisdom for such a private man; he won’t tell us what draws him to the endless string of sad casinos where he bides his time in rooms without windows or clocks, but he’ll show us how to count cards without being asked. Some part of him likes teaching people how to turn the odds in their favor, not that anyone would ever confuse the guy for a friend. William’s look is sleek but unassuming — equal parts Melville and Mastroianni — and his black sunglasses feel like mirrors of the dark shadows that fall on either side of Isaac’s glowering face.

The actor’s samurai-like performance recalls the charismatic mobster he played in “A Most Violent Year,” and stakes the movie to whatever it needs during flat dialogue scenes and Bressonian stretches of physical behavior. William’s rituals (e.g. stretching bed sheets over every surface in his motel rooms in order to make each indistinguishable from the last) can make it tempting to mistake him for a serial killer, but his easy rapport with gambling agent La Linda (Tiffany Haddish) suggests there’s something human behind those shark eyes.

Then again, it might not be such a mistake to think of William as a serial killer after all. The particulars are kept vague until the bitter end, but we know that whatever he’s desperate to atone for took place at Abu Ghraib under the supervision of a mustached Willem Dafoe, a plot detail that finds Schrader returning to the sins of George W. Bush’s foreign policy (occasional flashbacks are marked by the warped look of watching a VR feed without goggles, a choice that creates a disembodying first-person effect).

And William isn’t the only one with skin in the game, as he’s approached by a kid named Cirk — yes, with a “C” —  whose abusive father trained with the same man before taking his own life. Cirk (a shaggy Tye Sheridan) wants revenge, but William has other ideas. Maybe if he can teach this college drop-out to assume some responsibility for his future, William can achieve a measure of redemption for his past. It’s a gamble, but poker tournaments would never end if no one raised the ante. 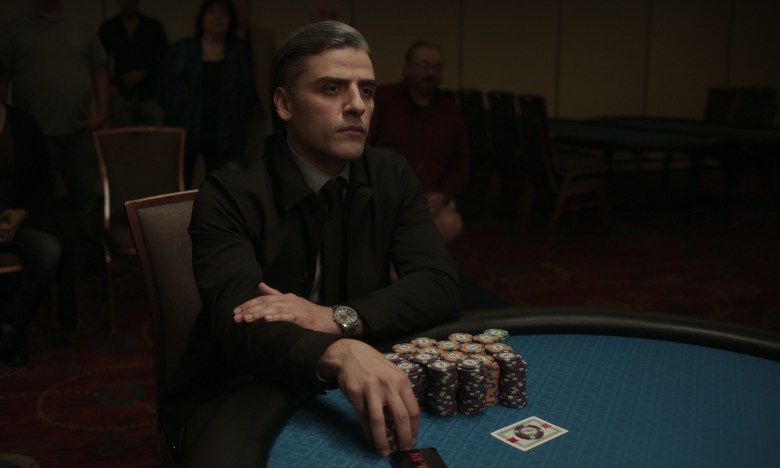 If that premise invites comparisons to Scorsese’s “The Color of Money,” the film that Schrader has pried out of it is unsurprisingly less interested in taut suspense or big scores (“bet small win small” is one of William’s personal commandments). Anyone primed for some all-in poker action is bound to be disappointed by a story that’s more interested in the monk-like patience of waiting for a good hand than it is in the drama of playing it out. The same goes for anyone hoping to breathe in some of the smoky mystique of vintage casino movies, as Alexander Dynan’s stagnant digital cinematography  sanctifies the glow of half-empty card rooms with the same holy fervor that Janusz Kaminski shoots floods of heaven-sent window light.

“The Card Counter” won’t make you want to become a casino rat any more than “First Reformed” made you want to become a reverend; this is an anti-romantic glimpse into the most abyssal pockets of American nowhere, full of detritus left behind by all the Danny Oceans of the world. It’s about motels and strip malls and flashing lights that blink so fast they might let you forget where you are for a minute or two. For William, and for the movie that Schrader hangs around him, blackjack and poker aren’t the main event or even a means to an end — they’re a distraction from what everyone is really doing there. “The Card Counter” may not be quite as narcotized as a Nicolas Winding Refn movie, but the numb camera movements and the whiskey drone of Robert Levon Been’s original soundtrack leave you with a palpable understanding of how someone could get stuck in these places until the end of time.

Which is why — even in a film that seems opposed to forward movement, and in spite of Cirk’s doltish energy — it’s genuinely exciting when the kid shows William a way forward. Isaac lights up with a giddy enthusiasm, albeit one that never forgets the intensity of his character’s anguish; the movie’s best scene is as hopeful and discomforting as anything Schrader has ever written, as Isaac swirls William’s sin together with his possible salvation in order to remind Cirk of what’s at stake. It’s a scene powerful enough to make the ones between William and Haddish’s underplayed La Linda feel sluggish and tacked-on by comparison, a sense that 1. Isn’t helped by some egregious ADR, and 2. Is almost entirely negated by a self-referential final touch that seals the film’s place in Schrader’s body of work.

That “The Card Counter” shakes your faith in the writer-director’s ability to beat the odds is part of its scabrous charm. Schrader’s film is perhaps too enamored by perdition to reach for the sublime — for all of its familiarity, even that ending is stuck in an unsettled emotional limbo — but poker is all about feeling around in the dark, and Schrader knows there’s no limit to what a man can do who’s capable of forgiving himself. It’s just like what Travis Bickle said to Wizard after his big “we’re all fucked” speech: “I don’t know. That’s about the dumbest thing I’ve ever heard.”

“The Card Counter” premiered at the 2021 Venice Film Festival. Focus Features will release it in theaters on Friday, September 10.