Gather round, people feeling nosy about what celebrities have lurking in their bank accounts: It’s time to discuss how much money the cast of SNL makes because it’s sort of complicated.

You’d think Saturday Night Live’s cast would make legit millions for working tirelessly every damn weekend, but it’s not quite that simple. While some cast members are definitely making a ton of money, the size of your SNL paycheck depends on how ~seasoned~ you are, like, season-wise. Quick breakdown, incoming!

How Much Does the Cast Make on SNL?

According to Celebrity Net Worth, first year cast members make just (sorry, “just”) $7,000 per episode. Which, considering there are typically around 21 episodes per season, ends up being $147,000. A ton of money, but it’s only going up from there.

Not sure what goes on between years two and five, but Celebrity Net Worth reports that if a Saturday Night Live cast member has been on the show for five years then they get a hugeeeee raise. Specifically, their per-episode salary shoots up to $15,000, which ends up being $315,000 for a 21 episode season (this is what Pete Davidson and Michael Che are thought to be making). And keep in mind that after five seasons of being on TV every Saturday night, these cast members tend to be household names—which means they’re supplementing their SNL income with movies and spon-con. 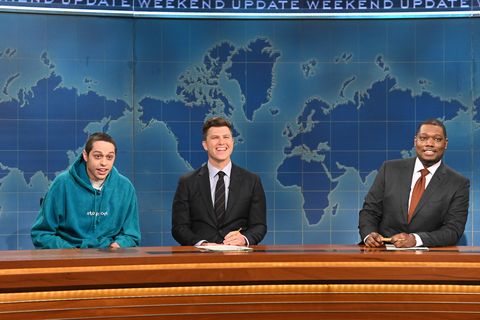 What Is the MOST Someone Can Make on SNL?

The highest NBC is willing to go for most major cast members is apparently $25,000 per episode, which comes to $525,000 per year based on a 21 episode season. But this salary range that is reserved for mega stars. Whomst, you ask? Apparently, Kate McKinnon, Colin Jost, and Cecily Strong each bring home this much for SNL.

But no one in this group has been on the show longer than Kenan Thompson (he started in 2003), and Celebrity Net Worth thinks he gets even more due to multiple years of salary negotiations. Their estimate for his total SNL salary is between $2-3 million per year.

How Much Do SNL Hosts Make?

Unlike SOME events which don’t pay hosts (see: most awards shows), Saturday Night Live comes through. According to The Sun, Justin Timberlake once told Entertainment Tonight he made $5,000 for hosting SNL:

Do SNL Guests Get Paid?

Short answer: yes. We know this because Alec Baldwin told The New York Times (via Deadline) that he got paid $1,400 for his Donald Trump appearances. 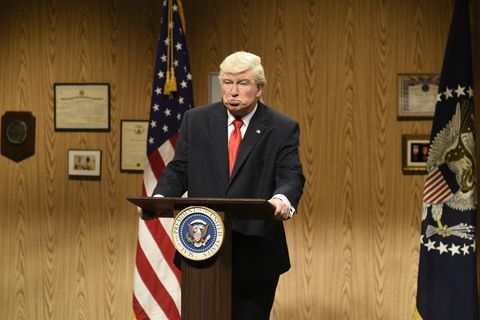 Obviously, this fee (and Justin Timberlake’s) might seem kinda low compared to what these actors command for other roles, but hosting/appearing on SNL is considered an honor and whatnot, so guess they’re fine with it!