The Handmaid’s Tale returns with more questions than answers. Thoughts?

This story contains mild spoilers about season three of The Handmaid's Tale.

"Are you insane," Commander Lawrence (Bradley Whitford) asked in the first moments of season three of The Handmaid's Tale as June (Elisabeth Moss) stood in the middle of the road from which her ride to freedom had just departed without her. "You didn't get in the truck," he said. "Thoughts?"

Look, he may be a creep, but surely he speaks for those of us who still feel infuriated by the ending of season two.

So here we are, picking up the thread pretty much exactly where we left it, with June's baby Nicole en route to Canada in the care of Emily/Ofglen/Ofjoseph (the wonderful Alexis Bledel), and June still – willingly – stuck in the misogynistic nightmare that is Gilead.

Is she insane? Thoughts?

On the basis of the first two episodes, which aired on Thursday night, I can't yet say whether there's any coming back from the breach of faith that season finale represented.

The show still looks great, with that gloomy palette of grey-green suggestive of the totalitarianism triggered by environmental collapse, punctuated only by the menstrual red of the handmaidens' uniforms. It is still equally intoxicated by the disorienting aesthetic of the extreme close-up and the patterns to be found in the massed and orderly ranks of fascism. But the logical inconsistencies are piling up faster than the worn-out bodies in the Colonies. 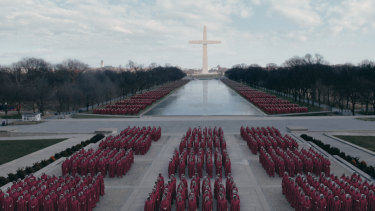 The visual appeal of massed ranks remains a strong theme in the show. Credit:SBS

Why is June, now surely outed as one of the most dangerous women in Gilead, not simply hanging from the wall like every other miscreant, none of whom has attempted to steal a baby from a Commander's household? Sure, her ovaries are precious, but fertile women have been dispensed with, or sent to certain death in the Colonies, before.

Why is she reassigned to Lawrence, whose previous handmaid was Emily, who fled after stabbing Aunt Lydia (Ann Dowd) in his house? Surely Lawrence must now be suspect in some way, so why pair him with the proven troublemaker that is June?

And why has Waterford (Joseph Fiennes) been demoted on account of all the trouble in his household – including his wife Serena (Yvonne Strahovsky) having the audacity to argue that girls should be taught to read – while Nick (Max Minghella), the regime's (and the rebels') spy, has been promoted to Commander? If stuff was going down on his watch, why is he being rewarded for it? (True, being sent to the front isn't much of a reward.)

Above all, why must June be recast as a superhero in waiting? 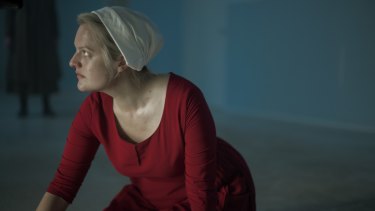 Elisabeth Moss’s June is increasingly taking on the characteristics of a superhero, capable of withstanding intense punishment but undaunted in her mission. Credit:SBS

In the opening moments of this season, she explained in a voiceover to her baby daughter why she is not with her. "I have reasons. There are always reasons. I'm sorry, baby girl. Mom's got work."

It echoed a line from earlier seasons uttered to her older daughter, Hannah – a working mother's guilt-ridden lament at not being there for the school play/dinner/doctor's appointment. Now though, she has real work, overthrowing the regime, cutting men down to size.

But is it just the men of the regime, or all men? I could be wrong, but it feels to me as if The Handmaid's Tale is teetering on the brink of a kind of reverse sexism in which all men are cast as weak, evil or morally inferior.

He may be a creep, but Commander Lawrence (Bradley Whitford) asks the question many viewers want answered.Credit:SBS

In one of the two episodes screening next Thursday, June lays out her manifesto. "Here's what we do," she says in another voiceover. "We watch them, the men. We study them. We feed them. We please them. We can make them feel strong, or weak. We know them that well. We know their worst nightmares. And with a bit of practice, that's what we'll become. Nightmares.

"One day, when we're ready, we're coming for you. Just wait."

I hope it's the men of the regime, rather than all men. Because I'm not sure that overthrowing one kind of fundamentalism with another amounts to any kind of victory at all.

The Handmaid's Tale airs on SBS on Thursdays and On Demand.