Robin made his debut on The Masked Singer as the first of 12 new celebrities performing to win over the judges and the studio audience in the world’s biggest game of Guess Who? The yet unknown contestant took to the stage to sing a rendition of Justin Timberlake’s I Can’t Stop The Feeling. However, a number of clues were dropped about who could be hidden inside the costume, ranging from a part in BBC soap EastEnders and possibly participating in I’m A Celebrity…Get Me Out Of Here! Taking to social media, fans of the ITV show were convicted Joe, 38, was showcasing his vocal talents.

The clue referring to I’m A Celebrity came once Robin had performed when the character was giving a debrief of their performance.

Speaking to the camera, the eccentric singer said they “liked to eat worms for breakfast,” which is something Joe would have experienced when he took part in the jungle-based reality show back in 2008.

After numerous BushTucker Trials in which he had to eat an array of critters, the former soap star won the title of King of the Jungle.

With this comment sparking curiosity and a link to the popular weeknight serial drama, which the television personality starred in from 2003 to 2008, it seemed viewers thought he could be the celebrity hidden inside the bird costume.

One fan wrote on Twitter: “I thought Joe Swash but wouldn’t expect him to sing that well! #MaskedSinger.” 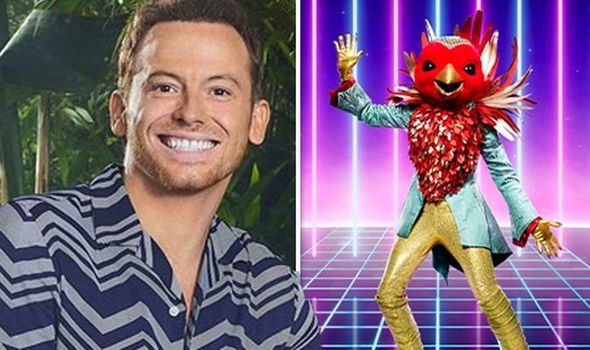 We will use your email address only for sending you newsletters. Please see our Privacy Notice for details of your data protection rights. The Masked Singer: Blob unveiled as Noel Edmonds days before return?

A fourth commented: “Robin is Joe Swash, there’s no way it’s anyone else #maskedsinger,” with a fifth adding how much they enjoyed the performance: “OK. I’m already fully in love with Robin! #MaskedSingerUK #MaskedSinger.”

“#maskedsinger going to say Robin is very young,” a sixth observed, with a seventh sharing: “Robin’s my winner already #maskedsinger.”

However, others were convinced it could be someone else with an eighth opining: “#MaskedSingerUK #maskedsinger is #robin #peterandre? @MaskedSingerUK.”

END_OF_DOCUMENT_TOKEN_TO_BE_REPLACED

END_OF_DOCUMENT_TOKEN_TO_BE_REPLACED
Recent Posts
We and our partners use cookies on this site to improve our service, perform analytics, personalize advertising, measure advertising performance, and remember website preferences.Ok