From Florida to the Philippines and Queensland to the Caribbean, Josh Morgerman has spent years chasing storms – first in the name of adventure; now in the name of science.

"I've had this obsession since I was a child," he says. "I grew up on the east coast of the US and we had hurricanes, and the very first one I remember when I was little, it made a real impression on me.

"As I grew up every time we got a hurricane and the wind would start to blow and the house would start to shake and the trees would start to wave, it was almost like I had a drug-like reaction to it. I feel like I've just spent my whole life hunting that feeling again and again, going further and further from home and into more and more violent storms." 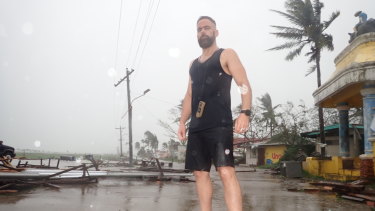 Morgerman's passion is evident in Hurricane Man, in which he and three small camera crews document hurricanes from the inside, following locals' efforts to survive and emergency services' rescue work.

"As you get closer to the centre the wind gets more and more violent," Morgerman says. "Then, finally, you get into the inner, inner ring, which is called the eye wall, and that's where things just go nuts – roofs can rip off, buildings can collapse, cars can fly.

"And then – this is the crazy thing – you go through that ring and you're in the centre, you're in the eye, and all of a sudden it just stops. The sun comes out, the wind just stills completely and you can walk around outside and see blue sky up above. And that'll last 10 minutes, 20 minutes, maybe an hour, and then you have to go back through the other side of the storm.

"To go from that violence to that calm in just a minute or two is one of the strangest things. It's totally surreal. Very eerie, but very beautiful."

The first two episodes of Hurricane Man provide a sense of the terror and devastation that Hurricane Michael brought when it crashed into Panama City, Florida, last year. 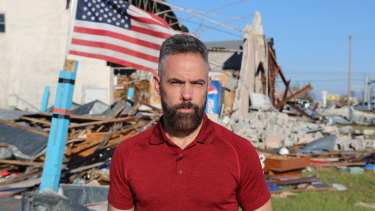 Hurricane Man details the terror and devastation that Hurricane Michael brought when it crashed into Panama City, Florida, last yearCredit:BBC

Viewers will see firefighters beginning to fear for their own safety as their fire station looks like it might be torn open by Category Five winds. Outside, one of Morgerman's camera crews and the locals they're following face the prospect of being caught in the open as their routes to refuge are cut off by fallen trees and power lines. Morgerman himself sees the hotel in which he's staying suffer severe damage before he emerges into the eye to take important air-pressure readings.

The aftermath is a scene of devastation, with thousands of houses and trees flattened.

"It was a large town – Panama City and the neighbouring county. It was about 167,000 people. If you think about that, it's 167,000 people whose lives have been permanently, traumatically altered, and you can't even get your head around it, the extent of the suffering.

"Believe it or not, I've seen worse. In the Philippines six years ago a super-typhoon at the top of the intensity scale made a direct hit on a city of 200,000 people and between 6000 and 10,000 people died, and after that one I kind of gave up chasing for a while. I was so upset by it. Dead bodies everywhere."

These days Morgerman is driven by the need to collect data to help scientists understand what it happening with hurricanes.

"They might be in regions, especially in developing countries, where there aren't any weather stations," Morgerman says. "When I get in the centre of those storms I'm collecting data that wouldn't otherwise exist and it helps scientists afterwards understand what happened.

"In your cyclone country you can have the same thing – a storm can come ashore without any kind of data records just because there aren't any weather stations in the area." 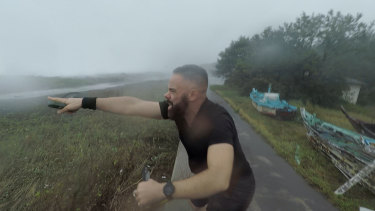 “When I get in the centre of those storms I’m collecting data that wouldn’t otherwise exist and it helps scientists afterwards understand what happened.”Credit:BBC

When it comes to his own safety, Morgerman admits to having been haphazard in the past, but he says that from the moment he began making Hurricane Man he felt a great responsibility for the safety of his camera crews and other people involved in the program.

"I have some rules, believe it or not," he says. In the strongest hurricanes he makes sure he's indoors before the eye wall hits, and he always makes sure that he's on high ground to avoid storm surges – which are often the biggest killers.

"There were a couple of moments in the making of the series where there were some borderline situations where maybe I didn't make the right call, but we got through," he says.

"Storm chasing is inherently dangerous, but I'm still here after all these years."