‘The Right Stuff’ Review: Disney+’s Space Epic Is Focused on the Wrong Things

Space and space exploration are having a moment in the pop culture zeitgeist. Just in the past year, we’ve seen Netflix alone trot out “Space Force,” “Away,” and “Over The Moon.” It’s with that in mind that the streaming space race takes flight with Disney+’s “The Right Stuff” debuting on the streamer roughly a year since it launched in November 2019.

“The Right Stuff,” which states that it is not only based on Tom Wolfe’s novel of the same name, but additionally Philip Kaufman’s 1983 adaptation for the screen, is Disney+’s first attempt at a more mature series since both “High Fidelity” and “Love, Victor” were ported over to Hulu for fear that the content wouldn’t sit well alongside Disney’s more family-friendly fare. Including the screenplay in the credits is notable because the specter of the 1983 film iteration haunts every moment of the series, especially in the early episodes when the audience is gradually being introduced to the Mercury Seven astronauts.

The presumption is that fans of the movie will spend most of the first episode matching the series’ cast up to their cinematic equivalents (Ed Harris’ John Glenn becomes Patrick J. Adams’ John Glenn, and so forth), and noticing what changes they made. Most notable among these is the complete omission of Chuck Yeager, who in the film served as a foil to the test pilots chosen and was memorably portrayed with such devil-may-care bravado by Sam Shepard (a role that earned him an Oscar nomination).

It’s easy to think this is creator and writer Mark Lafferty’s way of putting some narrative distance between his series and the film. It’s a ploy that definitely works to make the stories distinct, but likely at the expense of a more dynamic overall experience. Whereas the movie set up three different camps of test pilot (Yeager’s cowboy vs. NASA’s hotshots vs. Glenn’s Dudley Do-Right), the series is really only left with the simmering hostility between the two men vying to be the first man in space.

To describe “The Right Stuff” in a word: Confused. This show is never sure what it wants to be — though it definitely does not want to be the movie — and in doing so is likely to struggle to find an audience that clicks with it every step of the way.

The central conflict at the center of “The Right Stuff” is the dichotomy between the Mercury Seven program’s two most prominent members: Glenn, amiably portrayed by Adams as a savvy rung-climber capable of shrewd political maneuvers (hinting at Glenn’s post-astronaut life as a senator) and Alan Shepard, portrayed by Jake McDorman as a philanderer with impulse control issues (not to mention an inner ear condition). McDorman — last seen as Nelson Gardner/Captain Metropolis in HBO’s “Watchmen” — may be the series’ breakout star as he seethes with loathing for Glenn’s Boy Scout while simultaneously dealing with his own demons. 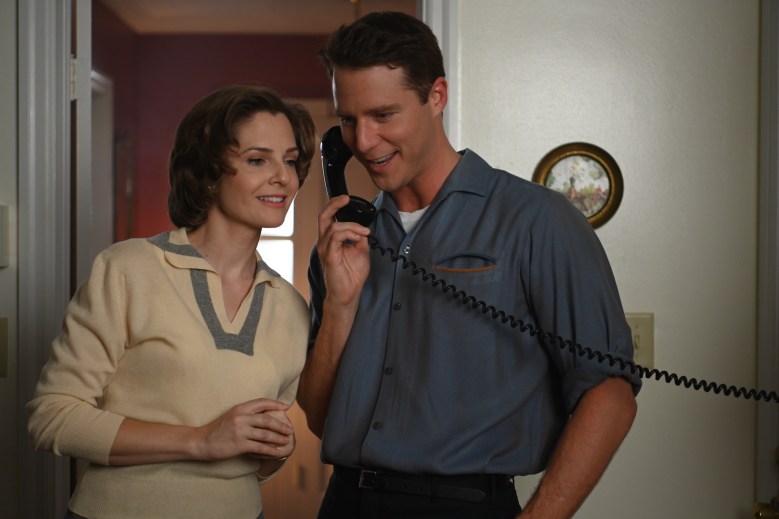 It’s actually a pity McDorman isn’t given more to do. His standout episode concerns a dysfunctional relationship with his father and his adopted daughter, complete with moments where he’s asked to do more than flirt or grimace.

A secondary plot involving Leroy “Gordo” Cooper (Colin O’Donoghue) and his wife Trudy (Eloise Mumford) who agree to feign a happy marriage to help her husband’s chances of being selected for the Mercury Program — spoiler alert, it works — is the only other real throughline in the show’s first five episodes provided for review.

Well, other than the space program itself. Creator Lafferty, no stranger to stories of ingenuity at the precipice of a technological breakthrough, having served as a writer for “Manhattan” and “Halt and Catch Fire”, evocatively showcases the salad days of NASA from large rooms filled with unmanned desks to failure after failure when it comes to launches. It’s just a shame that there isn’t more of it. Fans of the space program will probably leave disappointed at the short shrift given to the actual science of getting a man to space, though they might be the only ones to pick up on brief moments like Gus Grissom and Deke Slayton meeting for the first time. The show “The Right Stuff” is most likely to be compared to, HBO’s “From the Earth to the Moon,” solved a lot of the too much to tackle problem by detailing the challenges of the Apollo program in an anthologized manner.

Which brings us to another point, outside of the three astronauts mentioned above, the other pilots in the Mercury Seven serve as little more than background, which is unfortunate since these men all played a key role (and in Grissom’s case, gave their lives) to further the space program. In that vein, the series openly invites a second screen experience, as most viewers will likely be trying to fill in the blanks or verify if what’s being portrayed on screen is based in fact — and for the most part, it is.

Another red flag is that Alan Shepard’s Wikipedia page contains more acerbic wit than what is written for the actor. A tense scene early in the series is that of the botched first rocket launch, with all the families of the astronauts in attendance. On screen, in the aftermath of the spectacular explosion — shot in an eerily reminiscent manner to the Space Shuttle Challenger disaster — it’s predominantly silence punctuated by astronauts consoling their children. In real life, Shepard allegedly turned to Glenn and said: “Well, I’m glad they got that out of the way.”

On that note, fans of “when men were men” stories will probably be disappointed to find that this is not “Mad Men in space” despite the swinging ’60s setting, the whisky-drinking man-children behaving badly, and that Ken Cosgrove is now an astronaut (as Aaron Staton plays Mercury Seven’s Wally Schirra). Taking a cue from ABC’s short-lived “The Astronaut Wives Club” and the moments of domesticity that served as the emotional bedrock of Damien Chazelle’s “First Man,” seemingly 50% of the scenes are devoted to the family lives of the astronauts, focusing strongly on the marital relationships of Glenn, Shepard, and Cooper.

If there’s a positive in this respect, it’s that the three actresses portraying these women invigorate the proceedings when they pop into the story: the aforementioned Mumford, faking a marriage while yearning for an aviation career of her own; Nora Zehetner as Annie Glenn, whose stutter not only makes a public life difficult for her, but serves as the impetus for John’s constant filibustering (another nod to his senatorial life, perhaps); and Shannon Lucio as Louise Shepard, who is always one intrepid reporter away from being made aware of her husband’s near constant affairs, to say nothing of his death wish to be the best. 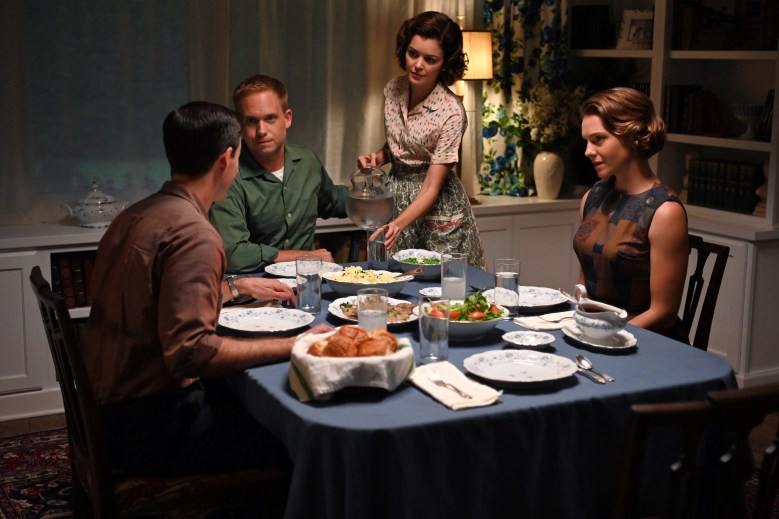 Even fans of domestic romance or melodrama will probably find these moments lacking, however, because though the performances are good and the relationships believable, the romance itself screams Disney+, teetering on the edge of steamy, but finding itself squarely in the Hallmark movie zone of sex, replete with bare-chested men and a single bra unclasping.

But the biggest weakness “The Right Stuff” harbors is in the depths of its call sheet, which is littered with supporting actors that will have viewers asking, “Do we have to put up with this? I mean, can’t we get a better actor, I know it’s a small part, but I know we can do better than this.” It makes for entire scenes filled with cringeworthy line reads that distract from the actual wonderful work the main actors mentioned above are doing.

In the end, “The Right Stuff,” much like the space program whose story it aims to tell, stumbles out of the gate to a slow and uneven start, but there are moments where, against all odds, you can see Lafferty and co. putting it together. Here’s hoping subsequent seasons see them land on the moon in both a literal and figurative sense.

END_OF_DOCUMENT_TOKEN_TO_BE_REPLACED

END_OF_DOCUMENT_TOKEN_TO_BE_REPLACED
Recent Posts
We and our partners use cookies on this site to improve our service, perform analytics, personalize advertising, measure advertising performance, and remember website preferences.Ok