As coronavirus (COVID-19) has lots of people around the world self-quarantined in their homes, people are trying to find things to do to pass the time. Luckily, the Netflix gods smiled down on us and delivered Tiger King: Murder, Mayhem, and Madness. If you haven’t had the chance to start watching Tiger King yet, do yourself a favor and click on it the next time your browsing Netflix. 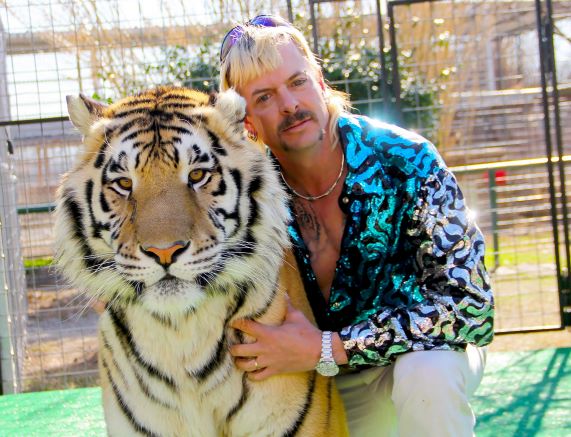 The documentary follows zookeeper Joseph Maldonado-Passage, who goes by the name Joe Exotic, and his feud with Tampa’s Big Cat Rescue owner Carole Baskin. It is made clear from the beginning of the documentary that Exotic ends up serving a lengthy prison sentence by the end of the story, but what happened to Baskin?

How did ‘Tiger King’ become a documentary?

Tiger King shows footage from before the murder-for-hire that Exotic went down for was even set in place. This is because when directors Rebecca Chaiklin and Eric Goode started out, Exotic wasn’t their focus.

“We started going around to places in Florida, where every few houses somebody has some crazy exotic animal in certain areas in their backyard,” Chaiklin told IndieWire. “It was really stunning to me how pervasive this was. We thought it would be much more issue-oriented and we had no idea that it would take the twists and turns that it would end up taking.”

“That was a very honest way the story unfolded,” Goode said. “Rebecca and I started in South Florida with a guy that I had interactions with over 30 years, but wasn’t close to him. He had been extradited out of Central America back to the U.S., he was a smuggler and a reptile dealer,” Goode said. “One day when we were there, a guy showed up wanting to buy a Gaboon viper, a venomous snake. He subsequently showed us what he had just bought in his van. He slid the van door open, and Rebecca and I saw this snow leopard in a little cage. It was 100 percent humidity and very hot that day in Florida. We were shocked.”

Simba Tiger snoozing by the lake <3

And from there, they started looking into people who owned large cats and found Exotic.

Who is Carole Baskin?

Baskin is introduced in the documentary as Exotic’s nemesis. In reality, the two wanted the same thing, to help cats. But they differed in the way that they wanted to do it. Exotic believed that by having people interact with baby lions and tigers, they would care more about wildlife, while Baskins believed what Exotic was doing was inhumane.

Though Baskin’s life is primarily centered around cats in the documentary, she has a very peculiar past. Baskin met her second husband, millionaire Don Lewis after he saw her walking down the street following a fight with her first husband. Lewis left his wife and four kids to be with Baskin.

While they were together, Lewis bought her her first bobcat. When they went to buy more kittens, they were told that all the rest of the cats were going to be killed. That was when they started their cat sanctuary, Wildlife on Easy Street. In the late 1990s, the sanctuary had more than 200 cats.

What is Baskin doing now?

While Exotic is sitting in jail for attempted murder for hire, Baskin is still running Big Cat Rescue.

“I think for Joe, [the feud] was probably very personal, because people said there wasn’t a day in his life that he wasn’t ranting and raving, and carrying on and calling out my name,” she told Vanity Fair. “But for me, he was just one of about a dozen of these bad guys that I was exposing online.”

END_OF_DOCUMENT_TOKEN_TO_BE_REPLACED

DUBAI (Reuters) – Tehran said on Thursday that a former FBI agent who disappeared in Iran 13 years ago had left the country a long time ago, despite his family saying a day earlier that he had died in Iranian custody. Robert Levinson went missing on Iran’s Kish Island in

END_OF_DOCUMENT_TOKEN_TO_BE_REPLACED
Recent Posts
We and our partners use cookies on this site to improve our service, perform analytics, personalize advertising, measure advertising performance, and remember website preferences.Ok