Who Is Pat Sajacks Daughter, Maggie?

Game show icon Pat Sajak is about to bring a little bit of home to work on “Wheel of Fortune.” His daughter, Maggie Sajak, just landed a gig working for the show, so she’s pretty fortunate to have a father with so much sway over the big wheel bigwigs who make employment decisions. According to Variety, longtime host Pat just signed a new deal that makes him a consulting producer, which certainly didn’t hurt Maggie’s chances of getting hired.

Wheel Watchers will soon see Maggie on all “Wheel of Fortune” social media accounts, including Instagram, Facebook, TikTok and Twitter. Her job title is “social correspondent,” which means that she’ll be creating content by interviewing contestants and the show’s cast and crew. This will give viewers a level of behind-the-scenes access that they’ve never had before. Pat and his co-host Vanna White signed contracts that will keep them on “Wheel” through 2024, but Variety didn’t say whether Maggie has that same level of job security.

Maggie already has her own page on the “Wheel of Fortune” website, which notes that she first visited the show’s set when she was just one year old. “The ‘Wheel of Fortune’ staff and crew have always been like an extended family, and I’m thrilled to be working with them,” reads a statement from the star in the making. So does she hope to follow in her father’s footsteps someday by hosting her own game show, or does she have other aspirations?

Maggie Sajak is a law student with a knack for music 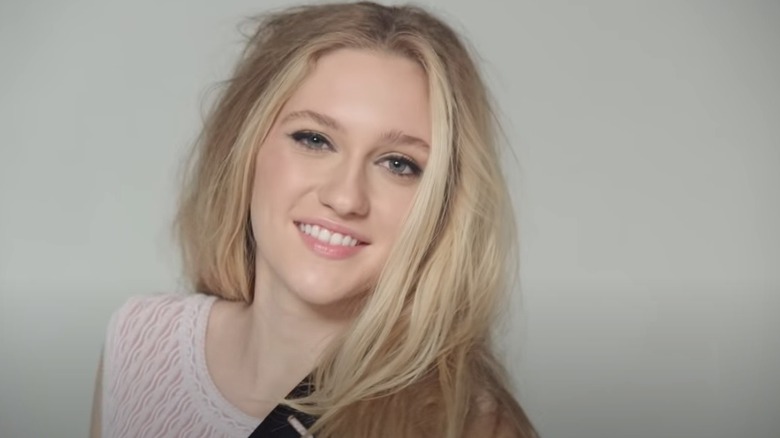 Maggie Sajak’s mother is Lesly Brown, a professional photographer who has a past as pageant queen and Playboy model (the latter of which she has in common with Vanna White), per The Sun. She gave birth to Maggie in 1995, and she and Pat Sajak have a lot to be proud of their daughter for: Maggie is a Princeton University grad who is currently in law school, which makes it seem like she wasn’t interested in working in front of a camera — until you learn about her other passion.

In 2011, Maggie recorded a country song titled “First Kiss.” Her debut single was featured on the CMT series “Sweet Home Alabama,” which was quite the accomplishment for a 16-year-old. In 2013, she released another song, “Wild Boy,” and spoke about her fondness for country music and Nashville while promoting it. “It’s like a little family, and I love that,” she told PopSugar. “And I love Nashville. It’s a little community. Everyone knows everyone, so it makes it a lot more fun for me.” In addition to pursuing a music career, she said that she was taking pre-med classes, so she’s certainly one ambitious young lady. 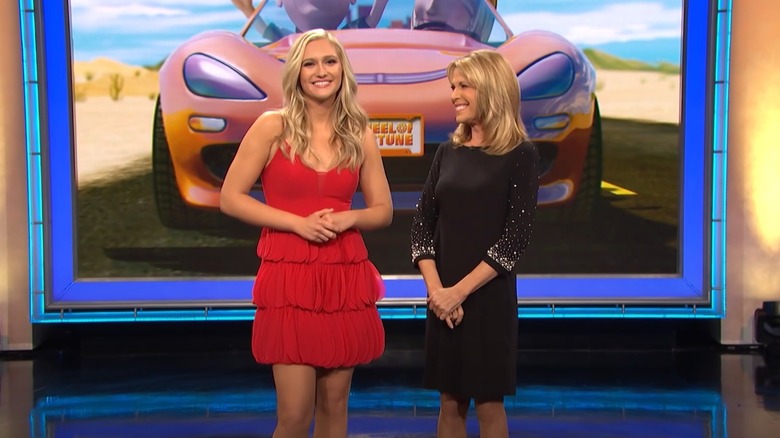 In 2019, Pat Sajak had to undergo surgery for a blocked intestine, and the “Wheel of Fortune” producers turned to someone who knew his job inside and out to fill in for him: his co-host Vanna White. This meant that someone else had to fulfill her duties, and who better than another blond with a megawatt smile? For her turn as the show’s letter turner, Maggie Sajak rocked a red mini dress with a tiered skirt. Before she got to work, she gave fans an update on her dad’s condition. “From the perspective of his daughter, it was a scary experience, I’m not going to lie,” she said. “But he’s doing great.” She also joked that she was “walking a little better” than she did when she appeared on the show as a 1-year-old in the ’90s.

In the year 2000, Maggie appeared on the show again with her older brother Patrick. They did a dead-on imitation of the after-show banter that Vanna and Pat engage in to fill time, and a future star was born. The social correspondent has already filmed some content for the “Wheel of Fortune” YouTube page. For Father’s Day, she listened to Pat tell a “dad joke” and practiced her interviewing skills on him. And for another video, she gave viewers a tour of his dressing room. She’s doing a great job so far, and we can’t wait to see more of her work.