‘A competition to win the 21st century’: US Senate passes anti-China bill

Washington: Although Joe Biden came into the White House promising to work with his political opponents to get things done, the United States Congress has remained as bitterly divided as ever since his inauguration.

Democrats and Republicans in the US Congress were not able to agree on the need to spend trillions of dollars on coronavirus relief. Nor have they been able to agree on an independent commission into the January 6 Capitol riot, an infrastructure spending package or police reform. 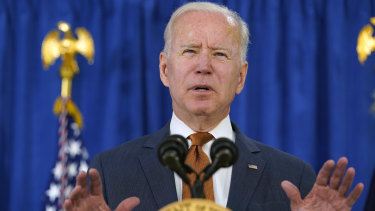 US President Joe Biden praised the passage of the bill, saying: “We are in a competition to win the 21st century, and the starting gun has gone off.”Credit:AP

But on Wednesday (AEST), conservative and progressive senators came together to pass a sweeping $323 billion bill designed to allow America to compete with, and hopefully defeat, China in the rival superpowers’ battle for economic and technological dominance.

Democratic Senate leader Chuck Schumer, a longtime China hawk, hailed the bill as one of the US Senate’s most significant bipartisan achievements in years, predicting that future generations will look back on it “as a turning point for American leadership”.

“The bill will go down as one of the most important things this chamber has done in a very long time, a statement of faith in America’s ability to seize the opportunities of the 21st century,” Schumer said in a speech on the Senate floor.

“Whoever wins the race to the technologies of the future is going to be the global economic leader, with profound consequences for foreign policy and national security as well.”

Republican Senator Todd Young, who co-sponsored the bill, said: “Let the record show that, at this moment, we stood united in our fight against the Chinese Communist Party.”

The bill, which passed by 68 votes to 32, is known officially as the US Innovation and Competition Act. In Washington it is colloquially known simply as the “anti-China bill”.

Its success reflects the fact that Democrats and Republicans, for all their differences, are united on the need for the US to take a tougher and more competitive approach to China as the two nations jostle for supremacy.

The text of the bill states that America’s global dominance is “being eroded and challenged by foreign competitors, some of which are stealing intellectual property and trade secrets of the United States and aggressively investing in research and commercialisation to dominate the key existing and future technology fields”.

The bill allocates US$65 billion over five years to spur the domestic manufacturing of semiconductors in the US. The move is aimed at reducing America’s reliance on Chinese manufacturing and combating a global chip shortage that has disrupted supply chains for cars, smartphones and other electronic appliances.

Another $103 billion will be spent on research into artificial intelligence, robotics and biotechnology as well as $1.9 billion to boost innovation in advanced wireless technologies such as 5G and 6G.

The legislation requires that the iron, steel and other construction materials used in federally-funded infrastructure projects be produced in the United States.

It also directs the US Secretary of State to publish a list of all state-owned enterprises in China that have engaged in forced technology transfers or intellectual property theft.

The bill will now head to the Democrat-controlled House, where it is expected to pass with modifications before heading to Biden’s desk.

The President welcomed the passage of the bill in the Senate, saying he looked forward to signing it into law as soon as possible.

“We are in a competition to win the 21st century, and the starting gun has gone off,” Biden said in a statement.

It will take far more than one piece of legislation for the US to fend off China’s economic rise.

But the members of the US Senate showed they are aware of the colossal task they face, and that bipartisanship is not completely dead in American politics.