A summer of tragedies and tensions for Life Saving Victoria

Kane Treloar points out the brown sand churned up in the water washing out to sea at Thirteenth Beach, near Barwon Heads. It’s a telltale sign of a rip.

Just last weekend a 56-year-old man drowned in big waves at this section of unpatrolled beach. A helicopter winched the man from the water but lifeguards could not revive him. 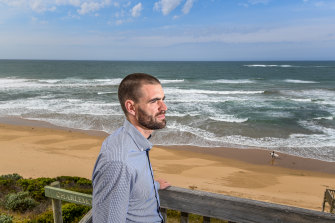 “The water was turbulent that day. It was full of sand,” Mr Treloar says. “Then the next day another four people were pulled out here in exactly the same place.”

Mr Treloar, director of lifesaving services with Life Saving Victoria, says the state’s beaches have been significantly busier this year, but convincing people to swim between the flags is a relentless challenge.

“People frequently find themselves in trouble 500 metres away from a flagged area.”

At the beginning of summer, Life Saving Victoria warned of a “perfect storm” for drownings. For much of 2020, many Victorians were not able to swim but were desperate to hit the water after months of lockdown.

Despite a major awareness campaign and expansion of lifeguard services at popular beaches, 42 people have drowned in Victoria since July last year.

The quick succession of serious incidents is emblematic of the challenge lifeguards have faced in Victoria, where the number of drownings for the past six months is the highest on record.

The number of rescues are also substantially higher than last year when bushfires deterred many people from going to the beach.

Life Saving Victoria conducted 359 rescues from the start of November 2019 until the end of January 2020. But that number had already risen to 476 from November last year to January 25.

In the previous financial year Life Saving Victoria had one helicopter, which was sent to 22 incidents, only one of which required a winch. Now the service has two helicopters that have been called to 68 incidents, including 15 winch incidents, so far in 2020-21. 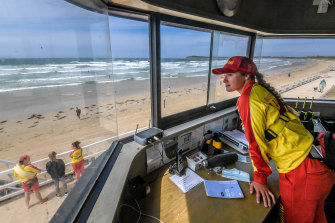 Mr Treloar describes a drowning as a sequence of events with many possible points of intervention.

“Sometimes the rescue is the break in the chain,” he says. “You can break the link earlier with education or awareness or [by people] making the decision, there’s a massive southerly blowing so I’m not going to go out in my tinnie today.”

Surf Coast chief lifeguard Grace Lightfoot says her crews have performed 13,282 “preventative actions” to avoid rescues and injury this summer. They range from putting up red and yellow flags to asking surfers to stay outside of patrolled swimming areas.

Ms Lightfoot, a university student, is responsible for about 80 lifeguards who patrol 10 beaches from Torquay to Apollo Bay.

She jokes her “office” is an observation tower perched beside the Jan Juc Surf Life Saving Club with sweeping views of the ocean.

Ms Lightfoot, the 2019 Australian lifeguard of the year, says her crews have performed 30 rescues this summer. In the Surf Coast region there has been one death at Anglesea at an unpatrolled beach where a man’s boat capsized. 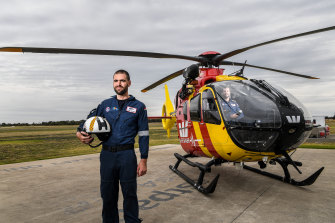 Kane Treloar is director of lifesaving services as well as a winch operator for the helicopters. Credit:Justin McManus

Although she lives in Melbourne, Ms Lightfoot grew up holidaying at Jan Juc where she joined the Nippers program aged 10.

She works for Life Saving Victoria in both a paid and voluntary capacity.

Many people put in countless volunteer hours, Ms Lightfoot says. This massive group effort ranges from patrolling and monitoring beaches to working behind the surf club bar or rattling tins for donations on highways.

“There’s such a big social aspect as well,” she says. “Everybody is able to find their niche.”

Many lifeguards are paid during the summer for their work from Monday to Friday but they continue to patrol beaches voluntarily as well.

Life Saving Victoria is kept afloat by its 38,000 volunteers, some of whom hold high-ranking positions within the organisation.

Many of those members have gained specialised skills that are crucial to carrying out complicated rescues. 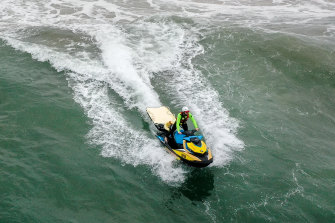 He patrols beaches with a jet ski from Williamstown to Phillip Island and the Surf Coast.

“It’s pretty amazing being able to help others in desperate times,” he says.

Mr Trainor is in his final year of studying medicine at Melbourne University and plans to become a doctor.

But he wants to continue his work as both a paid and voluntary lifeguard. He says even mundane rescues can be life-changing moments for the people plucked from the water.

“For us, it’s just what we’re trained to do. For them it’s the scariest day of their life.”

Despite his seniority, lifesaving services director Kane Treloar is also involved in a mostly voluntary capacity.

During the year Mr Treloar is a police detective based in Melbourne’s western suburbs but he spends much of his summer with Life Saving Victoria, including his role as a winch operator for the helicopters.

He says a shared belief in Life Saving Victoria’s mission to preserve human life is the motivation that keeps its members committed and putting in so many hours.

“Surf life saving is the biggest humanitarian organisation of its kind in Australia,” he says. 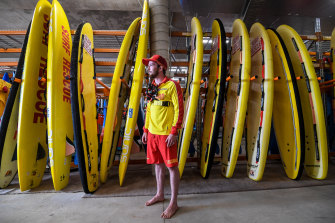 And its lifeguards are often the only thing standing between swimmers and tragedy.

“Every life lost in the water is an empty seat at the table at Christmas, at a wedding.”

But he warns there may still be more heartbreak to come for Victoria. Summer is far from done and dangerous beaches continue to lure people who are ill-prepared to cope with the force of the waves and rips.