A visual guide to the Gulf tanker attacks

What happened in the Gulf of Oman on Thursday?

Two oil tankers were attacked, leaving one ablaze and the other adrift, in the second such incident in a month near the strait of Hormuz, a major strategic waterway for world oil supplies. It was not clear who carried out the attacks or how.

Taiwan’s state oil refiner CPC said the Front Altair, owned by Norway’s Frontline, was hit at about 4am GMT while carrying a Taiwan-bound cargo of 75,000 tonnes of naphtha, a petrochemical feedstock. CPC said it was suspected the boat had been torpedoed but other reports suggested a mine attack was more likely. The crew were picked up by a passing boat and handed over to an Iranian rescue vessel.

The Kokuka Courageous sustained damage to its hull while transporting methanol from Saudi Arabia to Singapore, its owner, Bernhard Schulte Shipmanagement, said. It said the ship was afloat and the crew safe, with one minor injury reported. A shipping broker told Reuters the blast that struck the vessel might have been caused by a magnetic mine.

What happened in the incident in May?

On 12 May four oil tankers – two Saudi-flagged, one Norwegian-flagged and one Emirati-flagged – were damaged by explosions in waters off the United Arab Emirates.

A UAE-led inquiry published on 7 June found it was “highly likely” that four limpet mines, which are magnetically attached to a ship’s hull under the waterline, were used in the attacks. The report said they had been placed by trained divers deployed from fast boats. The mines were placed soon after the ships were anchored.

The inquiry blamed an unidentified state actor. The US has accused Iran of responsibility, but Iran denies it. 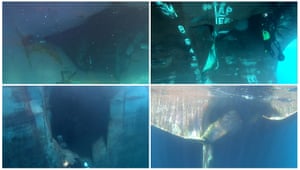 How are countries in the region aligned?

Rivalry between Iran and Saudi Arabia dominates, and the two are engaged in a series of proxy wars across the region, most notably in Yemen.

The US, which backs Saudi Arabia regionally, has 10,000 military personnel stationed at a base in Qatar. The US navy’s 5th Fleet, which assisted in rescue operations on 13 June, is based in Bahrain.

How are US-Iran relations?

Tensions between the US and Iran have soared in recent weeks, with Washington dispatching warships and bombers around the Gulf, and Tehran threatening to resume higher uranium enrichment. A year ago Donald Trump announced his decision to withdraw from Iran’s 2015 nuclear accord with world powers and restore crippling sanctions.

Recent tensions in the Gulf

Tensions between the US and Iran have soared, with Washington dispatching warships to the Gulf, and Tehran threatening to resume higher uranium enrichment.

John Bolton announces the deployment of the USS Abraham Lincoln carrier strike group and a bomber task force in response to ‘a number of troubling and escalatory indications and warnings’.

Iran vows to enrich its uranium stockpile closer to weapons-grade levels if world powers fail to negotiate new terms for its nuclear deal. The US responds by imposing sanctions on Iran’s metals industry.

The EU urges Iran to respect the nuclear deal and says it plans to continue trading with the country despite US sanctions.

The US says it will move a Patriot missile battery into the Middle East to counter threats from Iran.

The UAE says four commercial ships off its eastern coast ‘were subjected to sabotage operations’.

Yemen’s Houthi rebels launch a drone attack on Saudi Arabia, striking a major oil pipeline and taking it out of service.

The US embassy in Baghdad orders all non-essential government staff to leave Iraq immediately.

Saudi Arabia blames Iran for the drone attack on its pipeline.

A rocket lands near the US embassy in the Iraqi capital, Baghdad, without harming anyone. It’s not clear who is behind the attack, but after the initial reports, Donald Trump tweets: ‘If Iran wants to fight, that will be the official end of Iran. Never threaten the United States again!’

Semi-official media in Iran report it has quadrupled production of the low-enriched uranium used for civilian applications. Iran is allowed to enrich uranium, but increased production could lead it to exceed the stockpile limits in the nuclear deal.

Senior Pentagon officer Vice-admiral Michael Gilday says the US has a high degree of confidence that Iran’s Revolutionary Guards were responsible for the explosions on the four tankers in the Gulf of Oman.

Saudi Arabia’s King Salman hosts high-level summits in Mecca. He calls on the international community to use all means to confront Iran and accuses them of being behind ‘terrorist operations’ that targeted Saudi oil interests.

Saudi Arabia says 26 people were wounded in an attack by Yemen’s Houthi rebels on an airport in the kingdom’s south-western town of Abha.

Two oil tankers near the strategic strait of Hormuz were reportedly attacked in an assault that left one ablaze and adrift as 44 sailors were evacuated from both vessels and the US navy assisted. 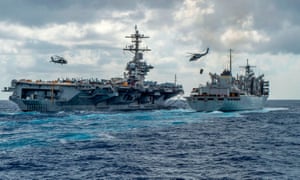 What is the role of the strait of Hormuz in the global economy?

The strait, which provides passage from the Gulf of Oman to the open sea, is the most important gateway for oil exports in the world. The US Energy Information Administration (EIA) calls it the world’s worst “chokepoint”, worse than the strait of Malacca, which runs between the Indonesian island of Sumatra, Malaysia and Thailand, connecting the Indian Ocean with the South China Sea. In 2016, 18.5m barrels of crude were transported through the strait of Hormuz compared with 16m through the strait of Malacca and 5m through the next largest, the Suez canal.

Iran has threatened to disrupt oil shipments through the strait if the US tries to strangle its economy.

Read more about the global economic impact of the attacks.