Defiance of Afghan girls: One year on from their country’s takeover by the Taliban, the youngsters who are risking wrath of the fanatical regime by going to secret schools

The walls are made of thick mud and the only light comes from sun streaking in through the narrow window across the carpet where Sumaya and her three friends sit.

The one-room house is like many others near the Afghan capital of Kabul, but to 15-year-old Sumaya it is ‘special, a chance to learn, a chance of a future.’

For the building is one of Afghanistan’s secret underground schools for teenage girls in defiance of the Taliban’s ban on their education.

Three times a week, Sumaya and her friends journey to the house, their faces and bodies covered, to study with an aunt, who is a teacher.

All travel slightly different routes and if they are stopped, they say they are visiting friends. 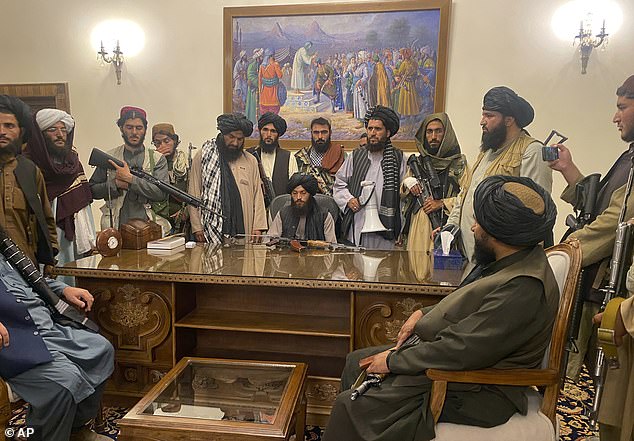 The Taliban took over Afghanistan a year ago and have banned teenage girls from attending secondary school. Picture: Taliban fighters take control of the Afghan presidential palace in Kabul, Afghanistan on August 15, 2021

They rarely carry stationery or pens knowing that, if they are caught, not only do they face the probability of punishment but their families do too.

‘The Taliban want girls to be prisoners in their homes, but I want to learn, I want a future where I can use my brain and work,’ said Sumaya.

The Taliban had promised the ban on attending secondary school would be temporary but with its leadership divided over a mooted reopening in March, the government reversed that decision.

One 14-year-old girl revealed her friend had been so devastated by the initial ban she had committed suicide, throwing herself from her family’s second floor flat.

She had been unable to face the fact her ‘dreams were over’. 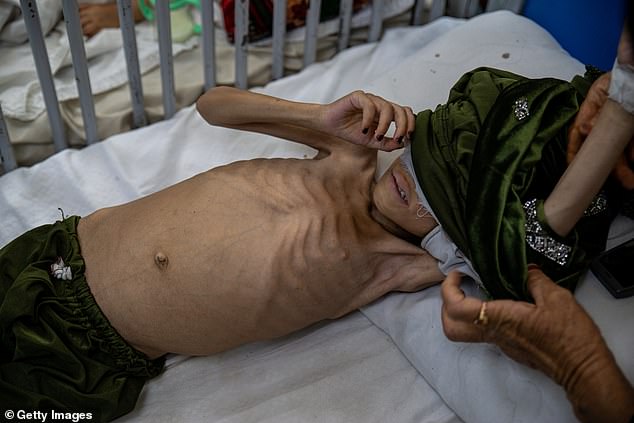 Over half the country need urgent humanitarian aid and there are warnings from the UN that 97 per cent of the population are on the brink of poverty. Pictured: a young child is treated for malnutrition in Kabul on August 13

The repressive ban is just one of the consequences of the Taliban sweeping unopposed into Kabul exactly a year ago.

But it has been 12 months of turmoil across a country where Western allies invested blood and billions to rebuild before a panicked, chaotic exit last August.

Few of the leadership’s promises of change have materialised. Tens of thousands of Afghans have fled, and many more hope to leave.

Amid the worst drought in 37 years and with half the population relying on food aid, the Taliban has told people ‘to trust in God to find food, not the government.’

Over half the country need urgent humanitarian aid and there are warnings from the UN that 97 per cent of the population are on the brink of poverty.

Faced with no money, parents face choices no families should have to make – from taking children out of school so they can work, to exchanging young daughters for money. 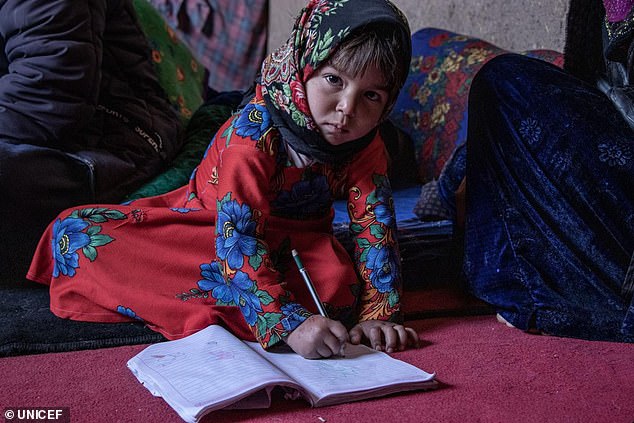 Child and forced marriages are said to be ‘surging’. One girl, five-year-old Farhana (pictured), has been promised as a child bride because of unpaid debts

According to aid agencies, there is little doubt those suffering most are women and girls.

Child and forced marriages are said to be ‘surging’. One girl, five-year-old Farhana, has been promised as a child bride because of unpaid debts.

… While babies are dying from starvation

The dark, saucer-like eyes of seven-month-old Samera stare out as a nurse cradles her head gently and cleans her desperately weak body.

She is one of the innocent victims of the humanitarian crisis in Afghanistan, among many suffering from the effects of severe acute malnutrition, one of the biggest killers in children aged under five.

Her 12-year-old brother Temor is worried and feels helpless.

Temor lives with his mother Sonia, 36, two brothers and Samera in a single-room home in a remote community in northern Afghanistan. Samera’s father has gone to Iran seeking work but they have not received any money.

Samera weighs just 8lb and her lifeline has been the Mobile Health Centre – one of 66 operated in the country by Save the Children – where she is being fed a special peanut-based paste which provides her with vital vitamins.

Her father Karim, once a successful businessman, was faced with an agonising decision after a money lender he had used turned up at his door demanding repayment.

Knowing repayment was impossible, Karim was forced into agreeing to give Farhana as a child bride if he does not repay the debt within six months.

He said: ‘I had to agree, or risk putting everyone in my family in harm’s way.’

Earlier this year, a decree from the Ministry for the Propagation of Virtue and Prevention of Vice said women should wear a burqa or cover their faces when in public, and that it would be ‘best’ for them to not leave home at all.

Another decree banned women from long-distance road and air travel unless chaperoned by a male relative.

Agnes Callamard, Amnesty International’s secretary general, said: ‘These policies form a system of repression that discriminates against women and girls in almost every aspect of their lives.’

Shaharzad Akbar, now exiled but once the head of the Afghanistan Independent Human Rights Commission, said: ‘When I talk to women and girls in Afghanistan, they say they feel trapped in a cage, like animals in a zoo.’

When women have tried to protest against the Taliban, crackdown has sometimes been brutal.

Amnesty International spoke to one protester who was detained for several days.

She said: ‘Taliban guards kept showing me pictures of my family. They kept repeating “We can kill them, and you won’t be able to do anything”.’

Chris Nyamandi, of Save the Children, warned: ‘Girls are bearing the brunt. They’re suffering from isolation and emotional distress and are staying home while boys go to school.

‘This is a humanitarian crisis, but also a child rights catastrophe.’