After summer from hell, Joe Biden tries to reset his presidency

Washington: Following a torrid summer in which his administration veered between looking adrift and shambolic, Joe Biden is trying to get his presidency back on track and to reassert a lost sense of authority.

In mid-July Biden had an impressive net approval rating of +10 according to the FiveThirtyEight polling average. His approval now sits at -4, a stunning decline in support in just two months.

Biden’s popularity began ticking down as America’s vaccination rollout hit a wall of resistance and the Delta variant spread across the country. What should have been a summer of triumph and liberation turned into a season of frustration and tragedy as COVID-19 cases and death rates soared. 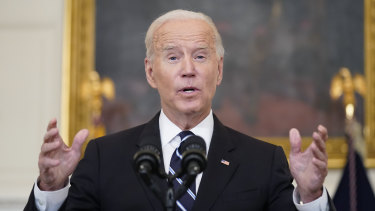 US President Joe Biden is trying to shift focus back to his administration’s efforts to tackle COVID-19. Credit:AP

Feeling confident after beating his early vaccine goals, Biden broke the golden rule of politics: never set a target you’re not sure that you will reach. It wasn’t until August that the US hit Biden’s July 4 vaccination goal for 70 per cent of all adults to have received at least one dose.

As he pleaded with recalcitrant Americans to get vaccinated, Biden looked impotent in the battle against the formidable Delta variant and anti-vaccine conspiracies. The measures he did introduce – such as a requirement for federal workers to get vaccinated or face regular testing – didn’t go far enough to have a major impact.

Then came the chaotic and deadly withdrawal from Afghanistan. Most Americans wanted to get out of the war, but they were alarmed by the way the departure was executed. The images of bedlam on their television screens left them shaken, as did the deaths of 13 US soldiers in a suicide bombing outside Kabul’s airport.

Biden was absent at key moments throughout the Kabul crisis and came off as overly defensive when he did appear in public. His approval rating dipped below 50 per cent for the first time since his inauguration.

Now Biden is going all out to reboot his presidency as summer fades and the North American autumn approaches.

Wisely, his main focus is the issue that continues to dominate American life: the coronavirus pandemic.

In a speech at the White House, Biden unveiled a six-pronged “action plan” to boost vaccination rates and drive down COVID cases. 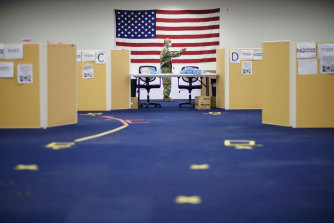 The headline grabbing aspect of the plan is a requirement for all workers at companies employing over 100 people to be vaccinated or submit to weekly testing. This policy, which will affect around 80 million workers, was far more extensive than had been expected.

The substance of the plan was applauded by public health experts.

Just as important was Biden’s rhetoric. No longer was he nagging the unvaccinated to roll up their sleeves; instead he delivered them some overdue harsh truths.

“Your refusal has cost all of us,” Biden said. “This is not about freedom or personal choice – it’s about protecting yourself and those around you.”

Biden was channelling the sentiments of the majority of Americans who have been vaccinated and are fed up with those who have refused to do so. Particularly incensed are the parents of children who are too young to be vaccinated and risk contracting the virus because of unvaccinated adults.

The administration has also seized other ways to shift the discussion away from Afghanistan.

Biden has been forceful in condemning the extreme Texas anti-abortion law that would make terminations a crime after six weeks – even in the case of rape or incest. Just before Biden’s COVID announcement, his Justice Department announced it would sue Texas over what it calls the “clearly unconstitutional” law.

Abortion is a divisive issue in America and is an animating force for religious conservatives. But the Texas law sits well outside the American mainstream given polls show six in ten Americans want the landmark Roe vs Wade abortion rights decision to remain in place. Like on COVID vaccine mandates, Biden is picking his fights wisely by siding with the majority.

A day earlier the Treasury Department released a new analysis showing that the wealthiest 1 per cent of Americans are evading US$163 billion a year in taxes. Taking on tax-evading millionaires is another political winner.

Biden’s next big challenge is to get his massive multi-trillion spending plans on infrastructure and social policy through Congress. That would help show Americans that government can improve their lives in practical, noticeable ways.

The President’s reset has a long way to go, but he’s off to a strong start.