Washington: The Democratic governor was drowning in scandal and under attack from his own party. He looked like he would almost certainly be forced out of office. Yet he managed to survive.

That’s what happened when Ralph Northam, the Governor of Virginia, was embroiled in a “blackface” scandal two years ago. 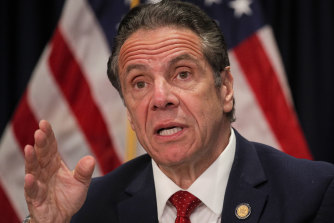 According to the report, Cuomo’s behaviour included unwanted touching and inappropriate comments as well as cultivating a toxic work environment.

President Joe Biden, House Speaker Nancy Pelosi and New York’s two US senators have all called for Cuomo to resign following the investigation’s damning findings. So have a raft of influential Democratic legislators in the New York state legislature.

Yet, at least for now, Cuomo is staying put in the governor’s mansion – just like Northam did in 2019 when photos emerged appearing to show him wearing blackface in a yearbook photo.

The story was major national news at the time. It proved deeply embarrassing for Democrats who were trying to present themselves as an enlightened, racially progressive alternative to Donald Trump.

Almost all of the leading Democratic presidential contenders called for Northam to step down, as did Virginia’s two US senators (both Democrats).

Instead, Northam banked on the fact that he could wait his critics out. He knew that the modern news cycle is like a fast-moving hurricane: it’s intense when you’re in the eye of the storm but scandals can rapidly fade into the background as new ones come along.

He also knew that, unlike Australian premiers and prime ministers, he was directly elected by the public and not dependent on his party colleagues to remain in the job.

The story soon disappeared from the headlines, allowing Northam to complete his four-year term as governor.

Trump proved similarly adept at riding out scandals during his time in office. He survived the Mueller investigation and remained in office despite multiple credible accusations of sexual assault and adultery. He was acquitted in two impeachment trials – even if American voters opted against granting him a second term.

The biggest threat Cuomo faces is from the Democrat-controlled state legislature, which is angling to impeach and remove him from office. Cuomo is an abrasive, domineering figure who has made lots of enemies during his lengthy political career.

Many Democratic state legislators consider him a control freak who rode roughshod over them during the COVID-19 pandemic. Progressives loathe him. They’re less afraid of him than congressional Republicans were of Trump when he was in office.

But impeaching and removing Cuomo is an elaborate process that will take weeks, if not months. Cuomo will hope that momentum fizzles out over time. He will also have time to call in favours and attempt to cut deals to stay in power.

If he believes impeachment and removal is inevitable, he could resign at the last minute as Richard Nixon did during the Watergate scandal.

Any opinion polls will be closely watched: do most mainstream New Yorkers want Cuomo to go or is it more a concern of progressives who spend too much time on social media?

During the early days of the pandemic, Cuomo was widely praised as a straight-talking alternative to Trump – so much so that adoring fans nicknamed him the “luv gov”. Then he was accused of undercounting COVID-19 nursing home deaths and former female staffers began coming forward with accusations of sexual harassment.

His response to the allegations has been laughably feeble. His official statement following the release of the state investigation included over 20 pages of pictures of prominent politicians, including Biden, hugging each other – as if such normal physical contact is in any way comparable to his alleged harassment and abuse of power.

Like Trump, he’s fancifully tried to claim the allegations are all lies concocted by his political enemies to bring him down.

Cuomo may cling to office, but only as a dramatically diminished figure. His days as a Democratic folk hero and potential presidential nominee appear over for good.