Behold the Glasgow Glacier: Antarctic ice sheet 104km-long is named in honour of Scottish city in a ‘stark reminder’ of climate change as Cop26 begins

A glacier in Antarctica was named after the city of Glasgow to mark its hosting of the Cop26 climate change conference.

The Glasgow Glacier is one of nine areas of fast-flowing ice in the Getz basin in the west of the continent to be named after locations of major climate treaties, conferences and reports.

The Scottish city is welcoming more than 100 world leaders and thousands of delegates to the 26th UN Climate Change Conference of Parties (Cop), from this weekend until Friday November 12.

Prime Minister Boris Johnson said: ‘By naming this glittering giant of nature after the city where next week humankind will gather to fight for the future of the planet, we have a stark reminder of what we are working to preserve.’

This glacier in Antarctica was named after the city of Glasgow to celebrate its hosting of the Cop26 climate change conference, which started on Sunday (Image: Pierre Dutrieux) 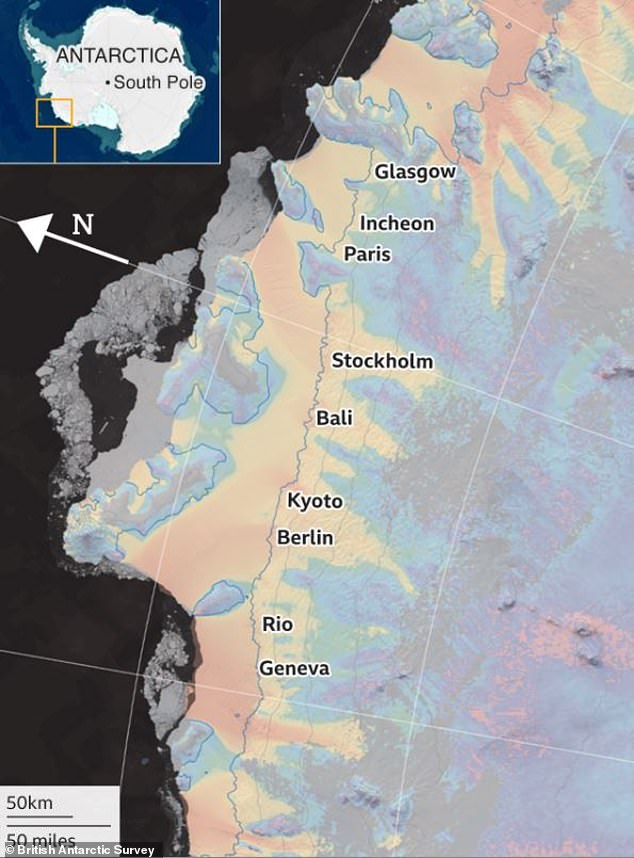 Glasgow Glacier is one of nine areas of fast-flowing ice in the Getz basin in the west of the continent to be named after locations of major climate treaties, conferences and reports

The request to name the glacier after Glasgow came from University of Leeds scientists including PhD researcher Heather Selley, who identified 14 glaciers in the basin that are thinning and flowing more quickly into the ocean.

She revealed in a study earlier this year that 315 billion tons of ice were lost from the Getz region over the last 25 years, adding 0.9mm to the global mean sea level – the equivalent of 126 million Olympic swimming pools of water.

Ms Selley said the glaciers are named in chronological order, with the Geneva Glacier in the west of the Getz study region marking the first climate summit in 1979 and the Glasgow Glacier in the east marking Cop26. 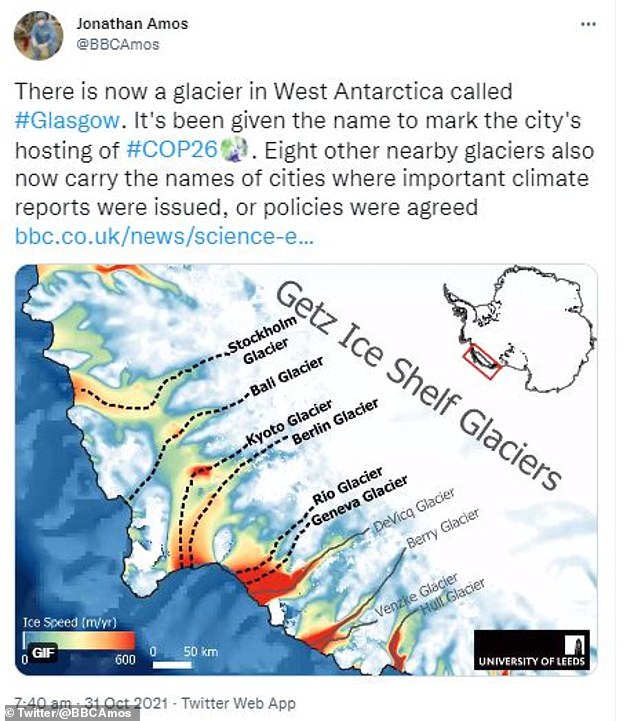 Ms Selley said the glaciers are named in chronological order, with the Geneva Glacier in the west of the Getz study region marking the first climate summit in 1979 and the Glasgow Glacier in the east marking Cop26

She said: ‘Naming the glaciers after these locations is a great way to celebrate this international collaboration on climate change science and policy over the last 42 years.

‘We wanted to permanently mark the outstanding effort the scientific community has put into measuring the present-day impact of climate change, and its predicted future evolution.’

Dr Anna Hogg, associate professor at the School of Earth and Environment in Leeds, said: ‘The climate crisis affects all of us, whether through flooding of our homes, increased storm frequency, reduced crop harvests, or the loss of habitats and biodiversity in the natural environment, with some communities impacted much more than others.

‘While these new glacier names celebrate the knowledge gained through scientific collaboration and the action taken through policy, it is clear now that much more must be done. 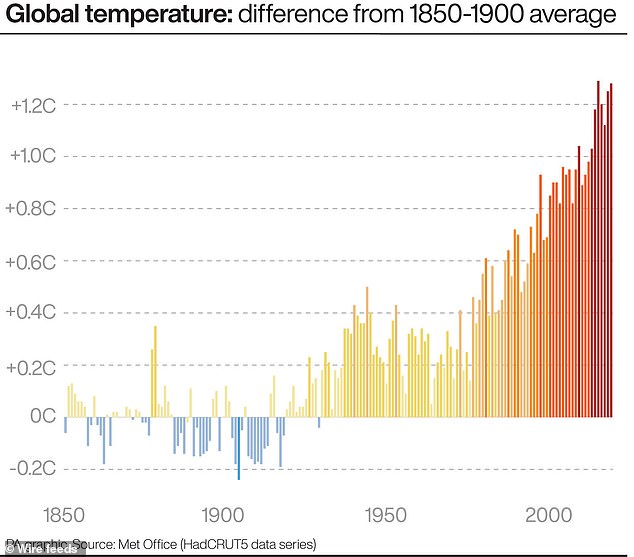 University of Leeds researcher Helen Sulley revealed 315 billion tons of ice were lost from the Getz region over the last 25 years, adding 0.9mm to the global mean sea level – the equivalent of 126 million Olympic swimming pools of water

‘I am inspired by the school climate strikes, which remind all of us that we are only temporary gatekeepers, and have a responsibility to protect planet Earth for the next generation.

‘There is no doubt that there’s a need for urgent action.

‘We have great hope in the power of international collaboration which can enable significant progress to be made at Cop26 this year.

‘The recent IPCC (Intergovernmental Panel on Climate Change) AR6 report finds that unless there are immediate, rapid and large-scale reductions in greenhouse gas emissions, it will not be possible to limit warming close to 1.5C or even 2C.’

Ms Selley will present her work at Cop26 at 10am on Wednesday November 10.

It comes as climate activist Greta Thunberg, 18, had to be escorted by police as she arrived by train into Glasgow for the conference. 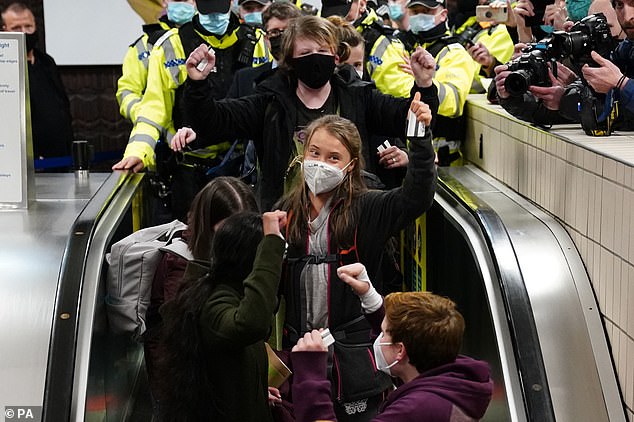 Greta Thunberg arrived in Glasgow ahead of the Cop26 summit, as world leaders prepare to discuss the climate crisis

The Swede arrived at Glasgow Central station on Saturday evening at around 6.40pm, on a train from London Euston, ahead of the international conference that began on Sunday.

Activists from around the world are expected to cause chaos at the climate summit.

Organisers expect up to 100,000 people at a major demonstration Friday requiring a heavy police presence.

Demonstrators will call on world leaders to take steps to prevent global temperatures from rising by more than 1.5C degrees.

Ms Thunberg took to Twitter to announce her arrival, writing: ‘Finally in Glasgow for the #COP26! Thank you for the very warm welcome,’ above a picture of her descending an escalator through the crowds.

The Archbishop of Canterbury has said the outcome of the Cop26 climate summit will be ‘life or death for millions of people’.

Justin Welby said the talks, due to begin in Glasgow on Sunday, are ’emergency surgery’ for the world and leaders must deliver for ‘the whole human family’.

Dr Welby, who worked in the oil industry before being ordained, is due to visit the summit on Monday and will meet with groups including young members of the Anglican community and indigenous people.

He warned radical action is needed but said there is still time to ‘save our world from the worst of the catastrophe’.

He said: ‘The Cop26 climate talks are emergency surgery for our world and its people.

‘The outcome will be life or death for millions of people. That’s how seriously we must take this moment.

‘The eyes of the world are on Glasgow: leaders must deliver for the whole human family. We can, and must, choose life, so that our children may live.

‘If these talks do not deliver, we face a dark, disturbing future – but there is still time, just, to save our world from the worst of the catastrophe.

‘This is a chance to start living in a way that is healthier, kinder, and better for everyone.’

The Church of England has divested from coal companies and says it will pull investment by 2023 from oil and gas firms that are not on a pathway to zero emissions.

It has also led the way on an initiative now supported by investors with funds worth 40 trillion US dollars to assess companies’ climate performance.

Dr Welby said he hopes the plight of communities most affected by climate change will be highlighted at Cop26.

‘It is their voices that I hope are heard, along with those of everyone on the burning front lines of climate injustice: the poorest, most vulnerable, and marginalised people already living with droughts, floods and vanishing natural resources,’ he said.