Home » World News » As lockdown lifted, Amanda and Keith had 60 seconds to get married

As lockdown lifted, Amanda and Keith had 60 seconds to get married

As Melbourne’s lockdown ended at 11.59pm, Amanda and Keith locked themselves in. From this day forward, until death do they part.

Long before October 21, 2021 became the day the city escaped its sixth and (hopefully) final lockdown, the couple had drawn a pink love heart around the date on their calendar. 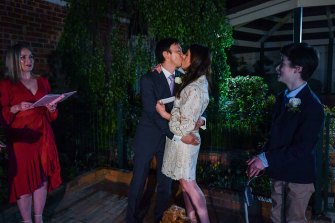 Amanda Thorpe and Keith Ing were keen to marry on the 21st anniversary of the day they met.Credit:Joe Armao

It marked their 21st anniversary of their meeting, and the date they chose several years ago as their wedding day.

Organising the ceremony has been a rollercoaster. Of course it has. Their initial plan, before the pandemic emerged was to elope to Canada. In September, the duo applied for an exemption to tie the knot in Tasmania’s Freycinet National Park, which was knocked back.

Having given up hope, Sunday’s announcement that lockdown would end early, at 11.59pm on Thursday, provided a window of opportunity. A one-minute window, to be precise.

An email from Ms Thorpe landed in celebrant Emily Hall’s inbox on Sunday afternoon, asking if it was possible to get married in fewer than 60 seconds. Absolutely you can, Ms Hall replied. 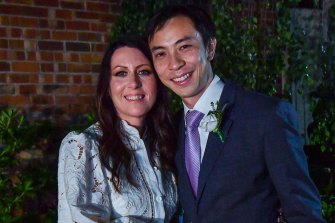 Ms Thorpe and Mr Ing took advantage of the 60-second window after lockdown ended to tie the knot.Credit:Joe Armao

“It was an unusual request but I wasn’t overly surprised,” Ms Hall says. “COVID has changed the game. Couples wanting to do a traditional 150 guests are getting married with their dog and two best friends on the beach.”

Flanked by their two teenage sons and Dog Ryder on a balmy night at their home in Balwyn, in Melbourne’s east, Ms Thorpe and Mr Ing became husband and wife – just in time.

The couple, both 40, have a knack for being early adopters: they met in a chatroom 21 years ago, when internet was dial-up only.

“I’m so glad it happened in the backyard of our place,” Ms Thorpe says.

“We did it on our date, it didn’t matter where it was. I had these grand plans of spectacular views behind us. At the end of the day, I married the person I want to spend the rest of my life with.”

“We did it on our date, it didn’t matter where it was. I had these grand plans of spectacular views behind us. At the end of the day, I married the person I want to spend the rest of my life with.”

If only they lived 20 kilometres south in Hampton, the couple could have been treated to free wedding music from Jordan Tranter and Daniel Smith, who got together for their first jam session in almost three months.

The cousins, both 19, had joked just before the sixth lockdown about having to wait months for their next gig. 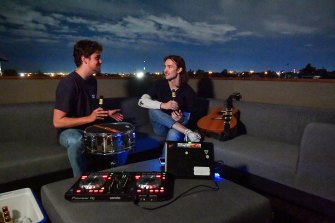 Two-and-a-half months later, as home meetings of up to 10 people became legal again, Jordan was on guitar and Daniel on the drums – inside, to avoid infuriating the neighbours.

“I worked on a couple of songs with a few lyrics in lockdown, so we got to play those,” Mr Tranter says. “We’ve been hanging out since we were three or four. This feels special.”

The cousins reunited on Mr Smith’s rooftop overlooking Hampton Beach, which he re-decked during lockdown and furnished with new couches.

A fitting spot, then, for Mr Tranter to reflect on how the pandemic has affected him as a year 12 student last year before starting university in March.

“This one was different from all the others. It felt like that sense of community disappeared – we’re all so over it in Melbourne, we’ve endured so much, that I think we lost some of the unity,” he says.

“I’ve missed out on opportunities but it’s sharpened my focus too. I want to travel, up the east coast for Christmas and overseas next year. It’ll be a good couple of years, fingers crossed.”

“I want to travel, up the east coast for Christmas and overseas next year. It’ll be a good couple of years, fingers crossed.”

From rooftop to underground, Zoe celebrated freedom by switching on the lights at a garage of vintage arcade games in Chadstone.

She calls it her group’s “unofficial community space”, warmed by neon blue and purple lights and filled with the hum of arcade theme songs. 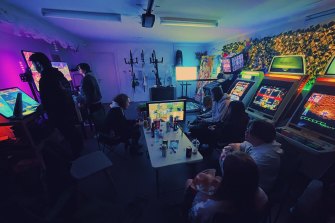 There’s Tetris – on which some members of the group of 10 are trying to beat world records – Japanese rhythm games, Tekken and a Dance Dance Revolution machine built from scratch by Zoe’s partner, who owns the garage.

“It’s baby steps, but to have all of Melbourne coming out of it with us, we’re just so stoked to meet again.”

First priority? Finishing off the golf tournament they were halfway through when lockdown hit.

“We’ve always been quite introverted, until the first lockdown ended last year and we started meeting to play,” says Zoe, who asked for her surname not to be published.

“Even though we’re all quite familiar with staying at home, all those lockdowns have given us this newfound love and respect for social life and experiencing the greater world.

“It’s baby steps, but to have all of Melbourne coming out of it with us, we’re just so stoked to meet again.“