Home » Australia falling in love with ‘world’s sexiest fruit’: Why you need some yuzu in your life

Australia falling in love with ‘world’s sexiest fruit’: Why you need some yuzu in your life

It looks like lemon, it tastes lemon-y, it smells a bit like lemon and you use it like lemon. But this is so much more than just lemon. This is yuzu.

Fast becoming a phenomenon, the yuzu has been labelled everything from a “wonderfruit” to “the world’s sexiest fruit” – even though most chefs and growers concede it is pretty ugly. 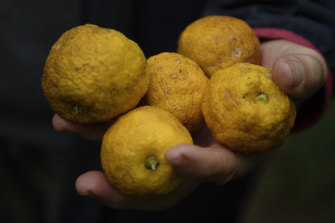 After appearing at fine diners such as Tetsuya’s in Sydney and Minamishima in Melbourne, yuzu is filtering down to cafes, restaurants and cocktail bars – including Glebe’s The Wedge Espresso, where it is sometimes made into hollandaise, and Edition Coffee Roasters at Darling Square, where yuzu curd adorns the miso banana bread.

And its applications are not just culinary. The Japanese bathe in it, with a hot “yuzu bath” typically taken on the winter solstice and said to relax the body and mind, soothe muscle aches and even ward off colds and viruses.

At Buck’s Farm in Chillingham in northern NSW west of Murwillumbah, Gerard “Buck” Buchanan also uses yuzu to make moisturiser, deodorant, shampoo and conditioner. After years of shipping the products around Australia, last week Buck signed up his first customer in Japan. 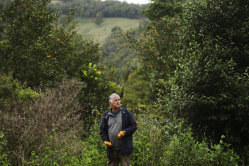 The 68-year-old Buck claims to be the first person to grow yuzu commercially in Australia after a suggestion from a Japanese woman 20-something years ago.

“She said to us ‘you should grow yuzu’,” he says. “I’d never heard of it. She came back 12 months later and she said ‘have you got that tree?’ I said ‘no, can you write that word down on paper for me and we’ll do some research’. Eventually we got half a dozen trees and here we are today producing hundreds and hundreds of kilos.”

Yuzu originated on the banks of China’s Yangtze River and was later introduced via Korea to Japan, where it became a kitchen staple – appearing in soups, sushi, salads, teas and desserts – as well as a medicinal wonder. Yuzu is known for having three times as much vitamin C as lemon.

There are two other big commercial growers of the fruit in Australia: Mountain Yuzu, the largest, at the foothills of the Victorian alps near Bright, and G. M. Arnold & Son at Waikerie in South Australia’s Riverland region.

It is still difficult to find yuzu at the supermarket, other than a few speciality Asian grocers. 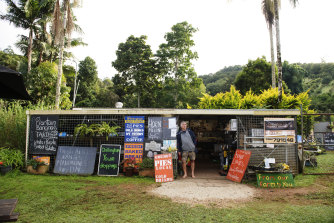 Owner of Buck’s Farm, Gerard ‘Buck’ Buchanan stands outside his shop on the farm at Chillingham in northern NSW.Credit:Elise Derwin

The yuzu is notoriously difficult to grow and not everyone is having a good season. While the trees are bountiful up at Buck’s Farm, they’re barren in Bright, where Mountain Yuzu’s Jane and Brian Casey are still experimenting with irrigation after starting their plantation in 2012.

“The last couple of seasons haven’t been great [but] we think we’re on top of the issue that’s been plaguing us and we’re expecting a bumper crop next year,” Mrs Casey says.

Her yuzu are commonly used in cocktails and other alcoholic drinks; the nearby Bright Brewery produces a yuzu sour ale, boasting “a light body and tart finish”, and Four Pillars makes a yuzu-infused gin.

“It’s the most fragrant fruit – it’s just an amazing thing and so versatile as well,” Mrs Casey says. “It’s kind of like a mandarin crossed with a lime crossed with a grapefruit, but that doesn’t do it justice at all.”

The husband-and-wife farmers are also big fans of the Japanese-style yuzu bath.

“We’re having them daily,” she says. “It’s really nice to put a few pieces in the bath with you. It’s this wonderful aroma that fills the room. It makes your skin really nice and soft, it’s relaxing. It certainly makes you feel happy, that’s for sure.”

Our Morning Edition newsletter is a curated guide to the most important and interesting stories, analysis and insights. Get it delivered to your inbox.