Singapore: Australia will send 2.5 million doses of the AstraZeneca vaccine to Indonesia as well as testing kits and ventilators as part of a $12 million package for oxygen-related equipment announced on Wednesday night.

The support effort comes as the south-east Asia’s largest country suffers a devastating new wave of the Delta variant of COVID-19 that has caused infections and deaths climb to record levels and left hospital beds and oxygen in short supply. 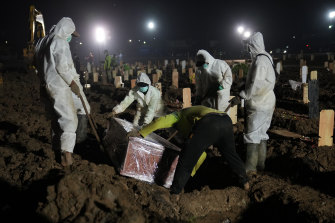 Foreign Minister Marise Payne said she had spoken to her Indonesian counterpart Retno Marsudi on Wednesday and confirmed an assistance package for Australia’s near neighbour as it battles the worst virus outbreak of the region.

It includes a shipment of AstraZeneca by the end of the year as well as more than 40,000 rapid antigen test kits, 1000 ventilators, up to 700 oxygen concentrators and more than 170 oxygen cylinders.

“Further to Prime Minister [Scott] Morrison’s announcement at the G7 Summit to provide at least 20 million COVID-19 vaccines for the Indo-Pacific region by mid-2022, 2.5 million of these vaccine doses will be shared with Indonesia to support its national vaccine rollout.” 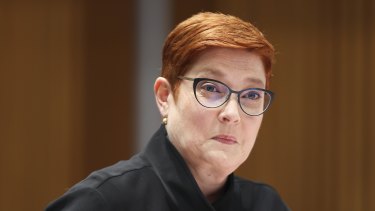 Australia’s help comes in the week before Trade Minister Dan Tehan is expected to make the first in-person visit of a senior Australian official to Jakarta since the pandemic began, although the stopover on a regional tour has been complicated by the extent of the outbreak and has not yet been confirmed.

Australia has also donated $77 million to its neighbour to procure vaccines through the COVAX facility and last year extended a $1.5 billion loan to Jakarta to support its COVID-19 response.

Indonesia has also ordered 10,000 oxygen concentrators from Singapore and told industrial oxygen gas companies to direct all production to the medical sector. It has also sought assistance from China as it plans for a scenario where new cases escalate to beyond 40,000 per day.

Additional infections have continued to surge, reaching another record of 34,379 on Wednesday as well as 1040 fatalities, another unwanted high mark that took the nation’s pandemic death toll to 63,908.

Epidemiologists believe the true case numbers are far greater because of testing rates well below the World Health Organisation standard.

While its health system has been pushed to the brink in the past three weeks, Indonesia has also been racing to access as many vaccine doses as it strives to inoculate at least 181 million of its 270 million people.

Only 12 per cent of the population has received at least one dose of either Sinovac or AstraZeneca, with just 5 per cent fully vaccinated. Another alarming development in the past month has been the deaths of dozens of health workers who had both jabs of the Chinese vaccine. 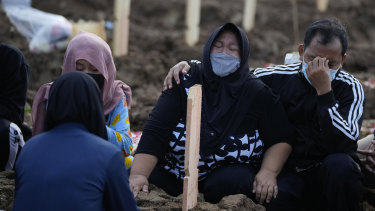 Family members weep during the burial of a relative at Jakarta’s Rorotan Cemetery which is reserved for those who die of COVID-19.Credit:AP

Australia joins Japan, the United States and the Netherlands in either sending vaccines or promising to do so in the last week as Indonesia’s plight has deepened.

Jakarta also announced a deal with Moscow on the production of vaccines during the visit of Russian Foreign Minister Sergey Lavrov on Tuesday.

The Kremlin’s top diplomat used the opportunity to take a barely disguised shot at the Quadrilateral Security Dialogue group, of which Australia is a member alongside the US, Japan and India, and its attempts to wield influence in the region.

“We pointed out that there was no alternative to the integration principles of ASEAN,” Lavrov said.

“We also said that we saw attempts to create overlapping mechanisms and draw dividing lines. These activities involve non-regional players that don’t uphold the principles that ASEAN established in the past decades.”

Tehan’s south-east Asian trip is also taking in Singapore, which he is due to visit next Monday.